The document Different Models of Atom Class 11 Notes | EduRev is a part of the Class 11 Course Chemistry for JEE.
All you need of Class 11 at this link: Class 11

Thomson's Model of Atom:or Plum Pudding model or Raisin Pudding model or water melon model.Thomson stated that atom is uniform sphere of positive charge with negatively charged electron embedded in it in such a way that atom becomes electrically neutral. A beam of α-particle was projected towards this gold foil. The foil was surrounded by circular fluorescent ZnS screen which produces flash when α-particle collide with it. 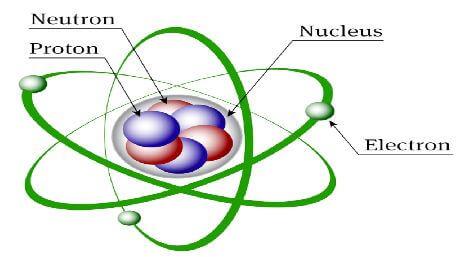 As the particle is moving closer to the nucleus of other particle, repulsive coulombic force increases (P.E. increases) and velocity of the particle decreases, kinetic energy is converted into P.E.∴ At point (2) E = K.E. + P.E. = 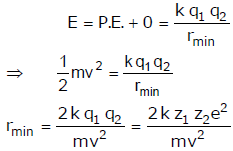 q1 = z1e ; q2 = z2ee = electronic charge = 1.6 × 10-19 Cz1 = z2 = Atomic numberDrawbacks of Rutherford's Model:(1) According to Maxwell's wave theory, an accelerated charged particles (like electron) revolving in the field of another charged particle like nucleus looses energy in the form of electromagnetic radiation and if this happen then orbit of the revolving electron should keep on decreasing and ultimately electron should fall into the nucleus and atom should collapse but this doesn't happen actually.(2) Rutherford's model didn't give any idea about electronic arrangement of an atom and since he didn't mention specific energy levels he couldn't explain the discontinuous atomic hydrogen spectrum.