The document Doc: Importance and Applications of Coordination Compounds Class 12 Notes | EduRev is a part of the Class 12 Course Chemistry Class 12.
All you need of Class 12 at this link: Class 12

The complexes are of immense importance on account of their applications in various fields. During complex formation there are drastic changes in the properties of metal atom/ion these changes in properties are made use of in the application of metal complexes.

(i) The detection and estimation of Ni2+  is based on the formation of a scarlet red complex with dimethyl glyoxime.

(a) Fe3+  is detected by formation of a blood red coloured complex with KSCN.

(b) Many ligands (organic reagents) are used for the gravimetric estimation of number of metal ions.

(d) The co-ordination compounds of the transition metals exhibit a variety of colours. This property is utilised in colorimetric analysis for the estimation of many metals.

Silver and gold are extracted by the use of complex formation. Silver ore is treated with sodium cyanide solution with continuous passing of air through the solution. Silver dissolves as a cyanide complex and silver is precipitated by the addition of scrap zinc.

b) Native Gold and Silver also dissolve in NaCN solution in presence of the oxygen (air).

Silver and Gold are precipitated by addition of scrap zinc. Nickel is extracted by converting it into a volatile complex, nickel carbonyl, by use of carbon monoxide (Mond's process). The complex decomposes on heating again into pure nickel and carbon monoxide.

In photography, the image on the negative is fixed by dissolving all the remaining silver bromide with hypo solution in the form of a soluble complex.

Metal complexes release metal slowly and give a uniform coating of the metal on the desired object Cyano complexes of silver, gold copper and other metals are used for the electrodeposition of these metals.

Metal complexes are of immense importance in biological processes. Haemoglobin, the red blood pigment, which acts as oxygen carrier to different parts of the body is a complex of iron (II). Vitamin B12 is a complex of cobalt metal. The green colouring matter of plants, called chlorophyll, is a complex of magnesium. It acts as a catalyst in photosynthesis.

(i) Sigma bonded organometallic compounds: In these complexes, the metal atom and carbon atom of the ligand are joined together with a sigma bond, For Examples:

(a) Grignard reagents, R - Mg - X where R is an alkyl or aryl group and X is a halogen.

(b) Zinc compounds of the formula R2Zn such as (C2H5)2Zn. (isolated by Frankland).

Al2(CH3)6 is a dimeric compound and has a structure similar to diborane, (B2H6). It is an electron deficient compound and two methyl groups act as bridges between two aluminium atoms.

(ii) Pi-bonded organometallic compounds : These are the compounds of metals with alkenes, alkynes, benzene and other ring compounds. In these complexes, the metal and ligand form a bond that involves the p-electrons of the ligand. Three common examples are Zeise's salt, ferrocene and dibenzene chromium.

These are shown below: 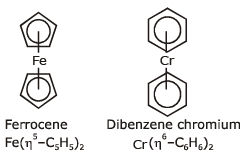 (iii) Sigma and Pi bonded organometallic compounds : Metal carbonyl compounds formed between metal and carbon monoxide, belong to this class. These compounds possess both s-and p-bonding. Generally oxidation state of metal atoms in these compounds is zero. Carbonyls may be mononuclear, bridged or polynuclear. In a metal carbonyl, the metal-carbon bond possesses both the s-and p-character. A s-bond between metal and carbon atom is formed when a vacant hybrid orbital of the metal atom overlap with an orbital on C atom of carbon monoxide containing a lone pair of electrons.

Formation of p-bond is caused when a filled orbital of the metal atom overlaps with a vacant antibonding p* orbital of C atom of carbon monoxide. This overlap is also called back donation of electrons by metal atom to carbon.

The p-overlap is perpendicular to the nodal plane of s-bond.

(i) Tetra ethyl lead (TEL) is used as antiknock compound in gasoline.

(ii) Wilkinson's catalyst [Rh(PPh3)3Cl] is use as homogeneous catalyst in the hydrogenation of alkenes.

(iv) Zeigler Natta catalyst (trialkyl aluminium titanium tetrachloride) acts as a heterogeneous catalyst in the polymerisation of ethylene in to polyethylene polymer.

Points to be remembered:

(i) CH3B(OCH3) is an organometallic compound but B(OCH3) is not.

(iii) Estimation of nickel (II) is done by complexing with dimethyl glyoxime (DMG) whereas that of Ca 2 and Mg2  ions is done by titrating against EDTA.

(v) Another type of geometrical isomerism is also shown by octahedral complexes of the type Ma3b3.

if each trio of donor atoms occupy adjacent positions at the corner of an octahedral face, then it is called facial (fac) isomer and when the position are around the meridian of the octahedron, then it is called meridional (mer) isomer.

(viii) p-bonded organometallics are formed by donation of p-electrons of double bond to the metal atom. For example Zeise's salt K[PtCl3h2 C2H4] and Ferrocene Fe(h5-C5H5)2

(ix) Grignard's reagent is one of the most useful organometallic compounds. Due to the high polarity of (Cd-Mgd ) bond, it can be used to synthesise many organic compounds.