The circulatory system is responsible for the transportation of nutrients and gases like oxygen, for the body and metabolic waste products away from the body. The heart and the lungs play an important role in circulating and purification of blood throughout the body. But is the heart the only organ that helps in purification? Let’s have a brief study on double circulation and the relevant organs involved. 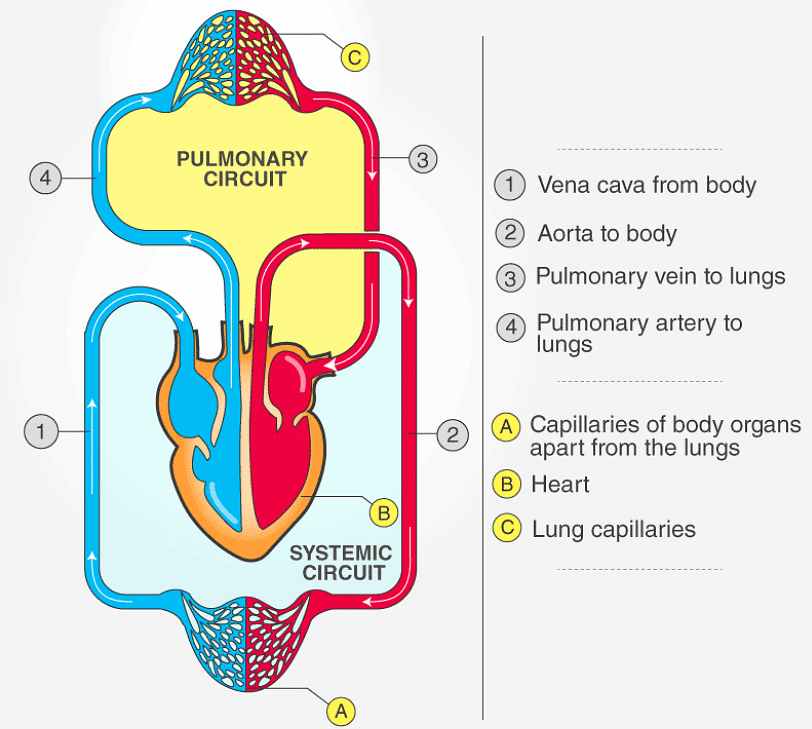 The human heart is divided into four chambers:

Further, the heart is connected to the lungs through the pulmonary artery and vein. In double circulation, there are two pathways in which the blood flows. They are:

Systemic circulation carries oxygenated blood from the left ventricles to the tissue capillaries.

In the pulmonary circulation, the blood circulation starts from the right atrium to the left atrium. In this pathway:

Double circulation supports a strict separation of both oxygenated and deoxygenated blood. Therefore, this circulation ensures that the body always has a dedicated supply of oxygen and also, it improves body efficiency. This is also one of the reasons why mammals can maintain their body temperatures. Apart from the double circulation, a third portal system also exists to improve circulation efficiency.

The heart is a muscular organ composed of specialized muscles called cardiac muscles. The main function of the human heart is to pump blood to various parts of the body. There are several internal factors which enable the human heart to regulate its activities on its own, but there are some external influences as well which regulates the cardiac activity. These factors include an autonomic nervous system, chemicals like hormones, ions etc.

Apart from autonomic regulation, there are certain chemicals which can affect the regulation of cardiac activity. These chemicals include hormones like epinephrine, nor-epinephrine, thyroxine etc. They can increase the contraction and heart rate. Ions are the other chemicals that have an impact on the heart.

The regulation of cardiac activity is influenced not only by these factors. Even gender of an individual can influence it.

The document Double Circulation & Regulation of Cardiac Activity Notes | Study Biology Class 11 - NEET is a part of the NEET Course Biology Class 11.
All you need of NEET at this link: NEET
Join Course