The document Early Medieval Age-II (800-1200 A.D.) - Arab Conquest of Sindh UPSC Notes | EduRev is a part of the UPSC Course History(Prelims) by UPSC Toppers.
All you need of UPSC at this link: UPSC

In 712 AD, AI Hajjaj, the Governor of Basra, led an expedition against Sindh's ruler Dahir,  under his nephew and son-in-law, Muhammad-bin-Qasim. This expedition put Sindh under the Arabs. 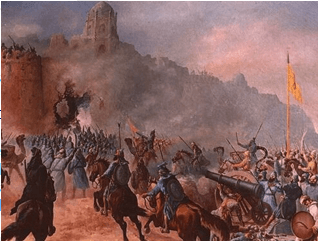 The cause of this expedition was neither the desire for territorial expansion nor religious. The king of Ceylon had sent some gifts to the king of Turkey which were looted at Debal in Sindh by the pirates. The ruler of Sindh, Dahir, refused to compensate the loss by showing his ignorance to the incident. This emerged AI Hajjaj and he attacked Sindh.

However, the Arabs failed to build a permanent empire in India. Several factors were responsible for this.

Attacks of Muhmud of Ghazni

Mahmud of Ghazni raided India for the first time in AD 1000 for her wealth. He wanted to make Ghazni, a principality of Afghanistan, into a region wielding formidable power in the politics of Central Asia. In a short period of 25 years, he made 17 raids. He destroyed many temple e.g. Somnath temple in Gujarat (1025 AD) as they were ddepositories of vast quantitites of wealth.

Muhmud did not make any systematic effort to capture India. However, he may be seen as the founder of Turkish rule in India to th extent that his expeditions opened India to conquest from the north-west.

The second attack from north-west was made by the Muhammed Ghori at the end of 12th century, for which India was not prepared. He attacked from Gomal Pass in 1182, and conquered Sindh. In 1182, he conquered Lahore and soon after, an attack was commenced on the Rajputs kingdoms controlling the Ganges plain. Prithviraj Chauhan led the Rajputs against Muhammed Ghori at the First battle of Tarain in 1191 and the Rajputs became victorious. At the Second battle of Tarain in 1191 at the same place, Prithviraj was defeated by the kingdom of Delhi fell to Ghori. Muhammad Ghori defeated and killed Jayachandra, the king of Kanauj, in the Battle of Chadawar. Before his assassination in 1206, Turks had conuered the Ganga-Yamuna doab and its neighbouring areas, and Bihar and Bengal wwere also overrun. This started a new era in Indian history.