The document Economic Growth & Development - Economics, UPSC, IAS UPSC Notes | EduRev is a part of the UPSC Course Economy and Indian Economy (Prelims) by Shahid Ali.
All you need of UPSC at this link: UPSC

An increase in the economic variable over a period of time is economic growth.  The term can be used in as individual case or in the case of important aspect of growth it its quantifiability i.e. one can measure it in absolute terms. Though growth is a value neutral term i.e. it might be positive or negative for an economy for a period, we generally use it is the positive sense.

For economists development indicates the quality of life in the economy which might be seen in accordance with the availability of so many variables such as:

The United Nations Development Programme (UNDP) published its first Human Development Report (HDR) in 1990. The report has a human development index (HDI) which was the first attempt to define and measure the level of development.

The HDI went on to select three broad parameters and allotted them an equal weightage on the scale of one and measured the development of countries included in the report. The three parameters are given below: 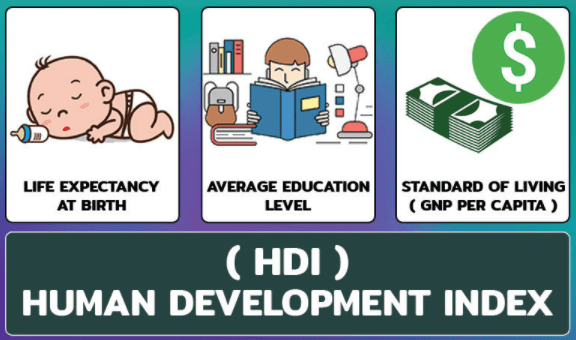 Bhutan has developed a new concept of development in early 1970s- the Gross National Happiness (GNH).

Without rejecting the idea of human development propounded by the UNDP, the kingdom has been officially following the targets set by the GHN. Bhutan has been following up the GNH since 1972. Which has the following parameters to attain happiness/ development.