What is Electric Current? 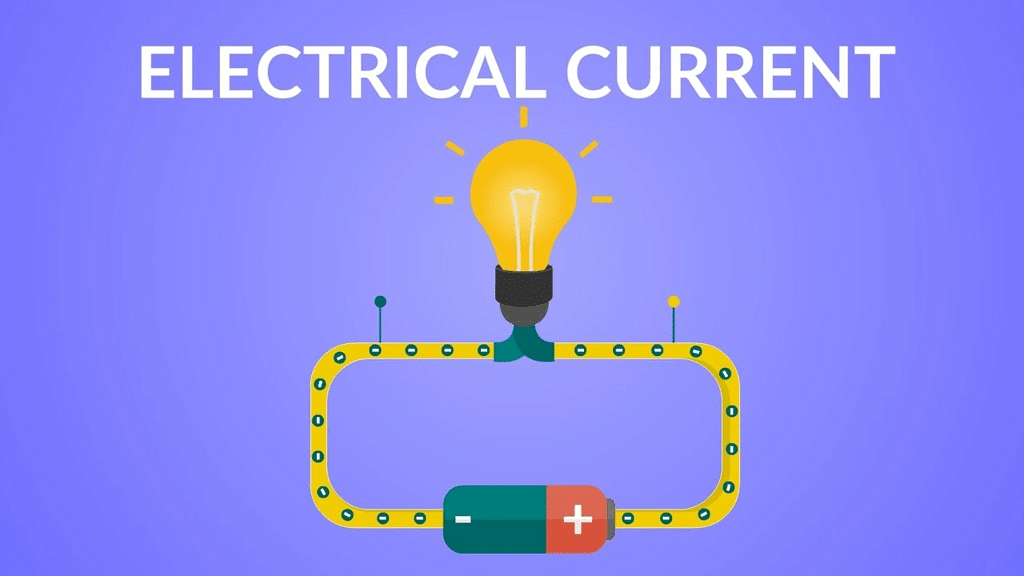 Question for Electric Current, Ohm's Law & Drift of Electrons
Try yourself:Electric current originates from which part of an atom?
Explanation

Based on the ability of the material to conduct electricity, materials are classified into Conductors, Insulators & Semiconductor.

Silver is the best conductor of electricity.

Question for Electric Current, Ohm's Law & Drift of Electrons
Try yourself:Which of the following is the most conductive element?
Explanation

Silver is one of the most electrically conductive element. This is because electrons can move more freely in silver than any other elements. Silver also has the lowest contact resistance of any metal.

The SI unit of current is Ampere (A). The current through a wire is called one ampere if one coulomb of charge flows through the wire per second.

Electric current is an important quantity in electronic circuits. We have adapted electricity in our lives so much that it becomes impossible to imagine life without it. Therefore, it is important to know what is current and the properties of the electric current.

What is Ohm's Law?

Ohm’s law states that the voltage across a conductor is directly proportional to the current flowing through it, provided all physical conditions and temperature remain constant. 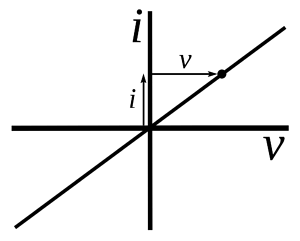 Ohm’s Law Equation: V = IR, where V is the voltage across the conductor, I is the current flowing through the conductor and R is the resistance provided by the conductor to the flow of current.

Question for Electric Current, Ohm's Law & Drift of Electrons
Try yourself:In which of the following cases is Ohm’s law not applicable?
Explanation

According to Ohm’s law, it is applicable only to conductors. Hence, Ohm’s law is not applicable in case of insulators.

You can make use of the Ohm’s law magic triangle to remember the different equations for Ohm’s law used to solve for different variables(V, I, R). 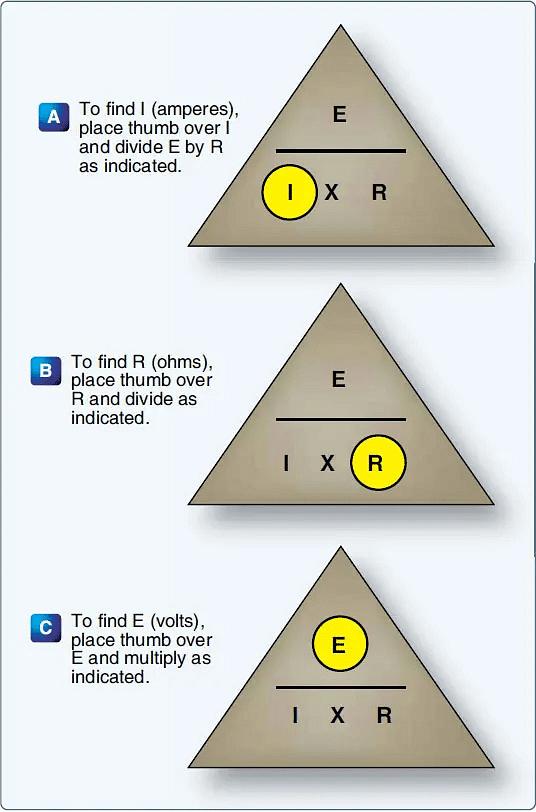 If the value of voltage is asked and the values of the current and resistance are given, then to calculate voltage simply cover V at the top. So, we are left with the I and R or I X R. So, the equation for Voltage is Current multiplied by Resistance. Examples of how the magic triangle is employed to determine the voltage using Ohm’s law is given below.

Example 1: If the resistance of an electric iron is 50 Ω and a current of 3.2 A flows through the resistance. Find the voltage between two points.

If we are asked to calculate the value of voltage with the value of current and resistance given to us, then cover V in the triangle. Now, we are left with I and R or more precisely I × R.

Therefore, we use the following formula to calculate the value of V:

When we are asked to find out the value of resistance when the values of voltage and current are given, then we cover R in the triangle. This leaves us with only V and I, more precisely V ÷ I.

The main applications of Ohm’s law are:

Following are the limitations of Ohm’s law:

Example 4: An electron beam has an aperture 1.0 mm2. A total of 6.0 × 1010 electrons go through any perpendicular cross-section per second. Find (a) the current and (b) the current density in the beam.

As the charge is negative, the current is opposite to be direction of motion of the beam.

(b) The current density is

Drift of Electrons & the Origin of Resistivity

What is Resistance or Resistivity?

The tendency of a material/device towards resistance is the resistivity of the device/circuit. The SI unit of resistivity is ohm-meter. The unit length across the cross-sectional area of the device is also resistivity. Therefore, the nature and temperature of the material also define resistivity (σ). 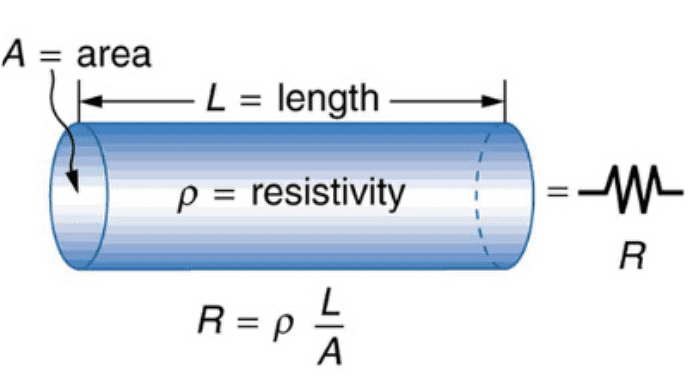 The graph of resistivity as follows. The graphs depict current (I) to voltage (V) ratio, whereas, dotted line A, B, C shows the idealized graph. After a certain amount of current, the device starts resisting to the current flowing in the system and the resistivity becomes constant.

Question for Electric Current, Ohm's Law & Drift of Electrons
Try yourself:A wire of length 2m and another wire of length 5m are made up of the same material and have the same area of cross section, which wire has higher resistance?
Explanation

Drift velocity is defined as the velocity with which the free electrons get drifted towards the positive terminal under the effect of the applied external electric field. 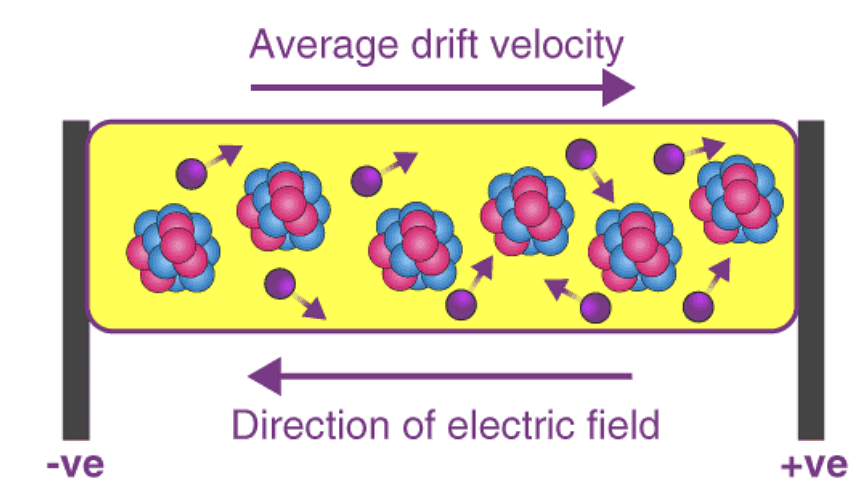 At any given time, an electron has a velocity,

the thermal velocity and

the velocity acquired by the electron under the influence of the applied electric field.τ1 = the time that has elapsed since the last collision. Similarly, the velocities of the other electrons are

of the free electrons

Example 5: Calculate the drift speed of the electrons when 1 A of current exists in a copper wire of cross-section 2 mm2. The number of free electrons in 1 cm3 of copper is 8.5 × 1022.

We see that the drift speed is indeed small.

We arrived at Ohm's law by making several assumptions about the existence and behaviour of the free electrons. These assumption are not valid for semiconductors, insulators, solutions etc. Ohm's law cannot be applied in such cases.

Example 7: The dimensions of a conductor of specific resistance r are shown below. Find the resistance of the conductor across AB, CD and EF.

Example 8: A portion of length L is cut out of a conical solid wire. The two ends of this portion have circular cross-sections of radii r1 and r2 (r2 > r1). It is connected lengthwise to a circuit and a current i is flowing in it. The resistivity of the material of the wire is ρ. Calculate the resistance of the considered portion and the voltage developed across it.

If follows from the figure, that

Example 9: The space between two coaxial cylinders, whose radii are a and b (where a < b as in (figure shown) is filled with a conducting medium. The specific conductivity of the medium is σ.

(a) Compute the resistance along the length of the cylinder.

(b) Compute the resistance between the cylinders in the radial direction. Assume that the cylinders are very long as compared to their radii, i.e., L >> b, where L is the length of the cylinders.

Here we have used the assumption that L >> b so that  and are in cylindrically symmetric form. The potential drop across the medium is thus :

Since the shells are connected in a series, we have

The document Electric Current, Ohm's Law & Drift of Electrons Notes | Study Physics For JEE - JEE is a part of the JEE Course Physics For JEE.
All you need of JEE at this link: JEE
Join Course