Considering the charge distribution as continuous, the total field at P in the limit Δqi → 0 is

Refer to the following figure:

Thus, there are three types of continuous charge distribution system.

Observe the rod given above of length L, a charge of +Q is distributed along the length of the rod. A small element dl will have a charge dq on itself. In this case, we define linear charge density of the rod.

The unit of linear charge density is C/m. If we consider a conductor of length ‘L’ with surface charge density λ and take an element dl on it, then small charge on it will be

So, the electric field on small charge element dq will be

To calculate the net electric field we will integrate both sides with proper limit, that is

Fig: We take small element x and integrate it in case of linear charge density

It is also defined as charge/ per unit area. Mathematically surface charge density is σ = dq/ds

where dq is small charge element located in small volume dv. To find total charge we will integrate dq with proper limits. The electric field due to dq will be 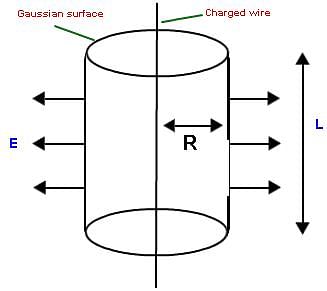 Steps to calculate Electric Field Intensity due to continuous charge body:(i) Identify the type of charge distribution and compute the charge density λ, σ or ρ.

(ii) Divide the charge distribution into infinitesimal charges dq, each of which will act as a tiny point charge.

(iv) Draw at point P the dE vector produced by the charge dq. The magnitude of dE is

(v) Resolve the dE vector into its components. Identify any special symmetry features to show whether any component(s) of the field that are not canceled by other components.

(vi) Write the distance r and any trigonometric factors in terms of given coordinates and parameters.

(vii) The electric field is obtained by summing over all the infinitesimal contributions.

(viii) Perform the indicated integration over limit of integration that includes all the source charges.Electric Field calculation due to Uniformly Distributed Continuous Charge

(a) Electric Field on axis of a uniformly charged circular ring: 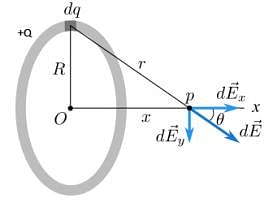 Consider a uniformly charged circular ring with a total charge +Q distributed uniformly along its length. We need to evaluate the net electric field due to this charged ring at a point P which is located x distance from its centre on its axis.Conclude that the charge is distributed linearly throughout the length of the ring, hence we will define linear charge density λ for this ring,λ = Total charge on the ring/𝑇otal Length =Q/2πrNow, we consider an infinitely small length element dl on the ring,Infinitesimal charge on element dl,dq = λdlNow, we write the expression of Electric Field at point P due to dq

This, infinitely small electric field vector will be inclined at an angle θ with the axis of the ring (x axis), as shown in diagram.We need to imagine components of

along the x and y axis i.e.

Observe and imagine, that

will cancel out if we take each and every element of the ring into consideration.Therefore net electric field at P,

Replacing with the value of λ defined above,

Now if dE be the electric field at P due to the element, then it can be given as

Now we resolve electric field in components. Electric field strength in x-direction due to dq at P is,dEx = dEsin 𝜃

Similarly, the electric field strength at point P due to dq in y-direction isdEy = dEcos𝜃

Thus electric field at a general point in the surrounding of a uniformly charged rod which subtends angles 𝜽1 and 𝜽2 at the two corners of the rod from the point of consideration can be given as In parallel direction,

We can use this generalized finite relation to calculate the Electric Field due to following systems too:(i) Infinitely long uniformly charged rod with charge density 𝜆:

(ii) Electric field due to semi-infinite wire:For this case,

Note: Identify that the electric charge is distributed over the surface of the non-conducting disc, hence we would define a surface charge density σ for this disc.σ = Total Charge/Total Area = Q/πR2

To find electric field at point P due to this disc, we consider an elemental ring of radius y and width dy in the disc as shown in figure. Now the charge on this elemental ring dq can be given asdq = σ (dA)where dA is the area of the ring element on the disc,also we can imagine ring element to be a small rectangle with width dy. Thus,dA = 2πydydq = σ(2πydy)Now we know that electric field strength due to a ring of radius R. Charge Q at a distance x from its centre on its axis can be given as

Now, using integration by substitution we can solve the above integral as,

Please note that 𝜽 is the angle subtended by the disc at point P which is x distance far from the center.

i.e. behaviour of the disc is like infinite sheet.

i.e. behaviour of the disc is like a point charge.Electric Field Strength due to a uniformly charged Hollow Hemispherical Cup:Figure shows a hollow hemisphere, uniformly charged with surface charge density 𝜎 C/m2 . To find electric field strength at its centre C, we consider an elemental ring on its surface of angular width dq at an angle q from its axis as shown. The surface area of this ring will be 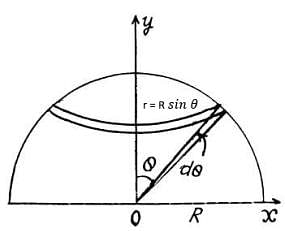 Now due to this ring electric field strength at centre C can be given as,

Net electric field at centre can be obtained by integrating this expression between limits 0 to 𝜋/2.

Above given continuous charged systems are most frequently used ones. It is recommended to remember the procedure and results by heart.

The document Electric Field due to Continuous Charge Distribution Notes | Study Physics Class 12 - NEET is a part of the NEET Course Physics Class 12.
All you need of NEET at this link: NEET
Join Course