The document Fundamental Rights- 3 UPSC Notes | EduRev is a part of the UPSC Course Indian Polity for UPSC CSE.
All you need of UPSC at this link: UPSC

RIGHT TO CONSTITUTIONAL REMEDIESThis right, covered by Article 32, guarantees the individual right to move the Supreme Court by appropriate proceedings for the enforcement of his fundamental rights. The Supreme Court is empowered to issue directions or orders or writs including writs in the nature of habeas corpus, mandamus, prohibition, quo warranto, and certiorari, whichever it considers appropriate.

Further, without prejudice to the powers of the Supreme Court, the Parliament may by law, empower any other court to exercise within the local limits of its jurisdiction all or any of the powers exercisable by the Supreme Court and finally, the right to constitutional remedies may be suspended as provided by the Constitution under Articles 353 and 359. The right to constitutional remedies is of paramount importance. Without such a remedy, these rights might well have been, what Dr. Ambedkar called, "glittering generalities" without any binding effect on the state. The importance of this article as such, was quite realised in the Constituent Assembly, and the majority of the members agreed that, "It is the very soul of the Constitution and the very heart of it." It may be argued that since this right can be suspended under Article 359, it has been robbed of its inherent and fundamental values and it takes away with one hand, what is given by the other.

Different kinds of Writs(a) Habeas Corpus: A writ of habeas corpus is in the nature of an order calling upon the person who has detained another to produce the latter before the court to let the court know on what ground he has been confined and to set him free if there is no legal justification for the imprisonment. The words 'habeas corpus' literally mean 'to have a body'. It is a very powerful safeguard against arbitrary acts not only of private individuals but also of the executive.The writ of habeas corpus is available:(i) For the enforcement of fundamental rights. According to Art 21 'no person shall be deprived of his life or personal liberty except according to procedure established by law'. Hence, the court may issue a writ of habeas corpus against the authority which has kept the person in custody and order the release of the person under detention. The court also issues the writ if the Executive has arrested and detained any person without the authority of any law or in contravention of the procedure established by the law or the law which authorises the imprisonment is itself invalid or unconstitutional. The court will also issue writ if  the order of imprisonment or detention is ultra vires the statute which authorise the imprisonment for detention.

The writ of habeas corpus is, however, not issued:(i) If the person against whom the writ is issued or the person who is detained is not within the jurisdiction of the Court. (ii) To secure the release of a person who has been imprisoned by a court of law on a criminal charge.(iii) And to interfere with a proceeding for contempt by a Court of record or by Parliament.

(b) MandamusMandamus literally means a command. The writ commands the person to whom it is addressed to perform some public or quasi-public legal duty which he has refused to perform and the performance of which cannot be enforced by any other adequate legal remedy. It is, therefore, clear that mandamus will not be issued unless the applicant has a legal right to the performance of legal duty of a public nature and the party against whom the writ is sought is bound to perform that duty. The writ of mandamus is available from the Court for the enforcement of fundamental rights. Whenever a public officer or a government has done some act which violates the fundamental right of a person, the Court issues a writ of mandamus from enforcing that order or doing that act against the person whose fundamental right has been infringed. Apart from the enforcement of fundamental rights, mandamus is available from a High Court:  (i) To enforce the performance of statutory duty by a public officer, where the duty is imposed by the Constitution or a statute or statutory instrument. (ii) To compel a court or judicial tribunal to exercise its jurisdiction when it has refused to exercise it. (iii) To direct a public official or the government not to enforce a law which is unconstitutional.

Mandamus is not granted against the President, or the Governor of a State, for the exercise and performance of the powers and duties of his office or for any act done or purporting to be done by him in the exercise and performance of those powers and duties (Art. 361). It is also not issued against a private individual or body whether incorporated or not except where the State is in collusion with such private party, in the matter of contravention of any provision of the Constitution, or a statute or a statutory instrument. 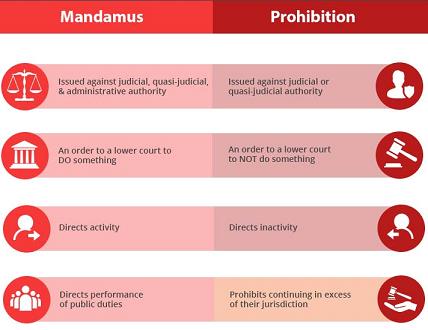 (d) Certiorari: The writ of certiorari is issued to keep the exercise of powers by judicial and quasi-judicial tribunals within the limits of the jurisdiction assigned to them by law and to restrain them from acting in excess of their authority. The writ of certiorari may be issued only:(i) To such tribunal or officer having legal authority to determine questions affecting rights of subjects and having a duty to act judicially and (ii) To such tribunal or officer who have acted without jurisdiction or in excess of the legal authority vested in such quasi-judicial authority, or in contravention of the rules of natural justice or there is an 'error apparent on the face of its record. It may also be issued to enforce fundamental rights when the decision of quasi-judicial tribunal offends fundamental right.A tribunal may be said to act without jurisdiction: (i) If the court is not properly constituted, that is to say, where persons who are not qualified to sit on the tribunal have sat on it and pronounced the decision complained against.(ii) Where the subject-matter of enquiry is beyond the scope of the tribunal according to the law which created it.(iii) Where the court has assumed jurisdiction on the basis of a wrong decision of facts upon the existence of which the jurisdiction of the tribunal depends. (iv) Where there has been a failure of justice either because the tribunal has violated the principles of natural justice or because its decision has been obtained by fraud, collusion or corruption.A decision of an inferior tribunal vitiated by an 'error of law' is liable to be quashed by certiorari, even though the court may have acted within its jurisdiction. Though prohibition and certiorari are both issued against courts or tribunals exercising judicial or quasi-judicial powers, certiorari is issued to quash the order or decision of the tribunal while prohibition is issued to prohibit the tribunal from making the ultra vires order or decision. It follows, therefore, that while prohibition is available during the pendency of the proceedings and before the order is made, certiorari can be issued only after the order has been made.

(e) Quo Warranto: It is a proceeding whereby the court enquires into the legality of the claim which a party asserts to a public office, and to oust him from its enjoyment if the claim be not well-founded.

For the issue of a writ of quo warranto:(i) The office must be public and it must be created by a statute or by the Constitution itself. (ii) The office must be a substantive one and not merely the function or employment of a servant at the will and during the pleasure of another. (iii) There should have been a contravention of the constitution or a statute or statutory instrument, in appointing such person to that office.

By the writ of quo warranto, the public can ensure that an unlawful claimant does not usurp a public office. It is, however, a discretionary remedy which the Court may grant or refuse according to the facts and circumstances of each case. It may be refused where it is vexatious or where it would be futile in its result or where the petitioner is guilty of laches or where there is an alternative remedy for ousting the usurper. Where the application challenges the validity of an appointment to public office, it is maintainable at the instance of any person. Whether any fundamental or other legal rights of such person has been infringed or not.