In News: Prime Minister Narendra Modi said production linked incentive (PLI) scheme, which is aimed at boosting domestic manufacturing and exports, is expected to increase the country’s production by USD 520 billion in the next five years.

The scheme aims to make India self-reliant in manufacturing goods for local and export markets, positioning it as a global manufacturing hub. It also aims to make domestic manufacturing competitive and efficient, build capacity, and benefit from economies of scale, enhance exports, attract investment and create jobs. The success story of special economic zones (SEZs) only adds credence to the impact that this scheme can also have on the economy. The scheme is on the lines of ‘Made in China 2025’ which aims at enhancing competitive strength of selected sectors.

Why is the production linked scheme needed?

According to experts, the idea of PLI is important as the government cannot continue making investments in these capital intensive sectors as they need longer times for start giving the returns. Instead, what it can do is to invite global companies with adequate capital to set up capacities in India. The kind of ramping up of manufacturing that we need requires across the board initiatives, but the government can’t spread itself too thin. Electronics and pharmaceuticals themselves are large sectors, so, at this point, if the government can focus on labour intensive sectors like garments and leather, it would be really helpful.

How will it incentivize manufacturing ops?

The production-linked incentive scheme gives eligible manufacturing companies a 4-6% incentive on incremental sales over the base year of 2019-20 for a five-year period. It is a kind of subsidy being provided by direct payment from the budget for domestically manufactured goods. The incentive amount varies across sectors and savings generated from PLI of one sector can be utilized to fund other sectors, maximizing returns. The PLI scheme will incentivize large domestic and global players to boost production, build a competitive ecosystem and lead to more inclusive growth. 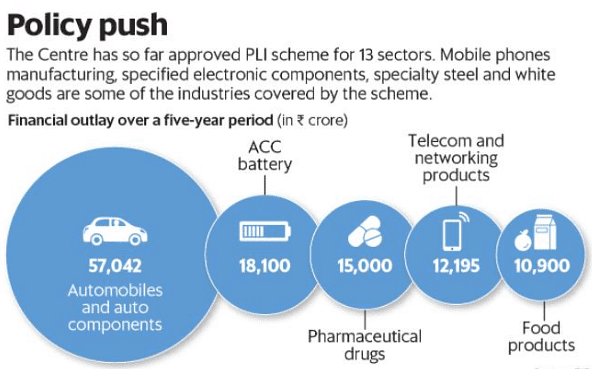