The document Group 18 Properties Class 11 Notes | EduRev is a part of the Class 11 Course Chemistry Class 12.
All you need of Class 11 at this link: Class 11

The 18 group of the Periodic Table consists of colourless, odourless gases at room temperature, isolated by William Ramsay in 1898 from air.

(ii) Physical state- They are all gases under ordinary conditions of temperature and pressure.

(iii) Abundance- In 1.0% air, the abundance follows the order-

However under high energy conditions, several molecular ions such as He+, HeH+, HeH2+and Ar2+ are formed in discharge tubes. They only survive momentarily and are detected spectroscopically.

(vi) Atomic radii- The atomic radii increases from He to Rn. It corresponds to the Van der Waals’ radii. So it has greatest atomic size in respective period.

(vii) Density- The density of noble gases increases down the group.

(ix) Solubility in water- They are slightly soluble in water and solubility increases from He to Rn.

(x) Liquefication- It is extremely difficult to liquefy inert gases due to weak Van der Waals’ forces of attraction among their molecules. Hence, they posses low value of critical temperature also.

(xii) Electron affinity- Due to the presence of stable electronic configuration, they have no tendency to accept additional electron. Therefore, electron affinity is almost zero.

The noble gases are inert in nature because of their completely filled subshells. In 1962, the first compound of noble gases was prepared. It is hexafluoroplatinate (prepared by Bartlett).

Now, many compounds of Xe and Kr are known with fluorine and oxygen.

Preparation of Compounds of Xenon: 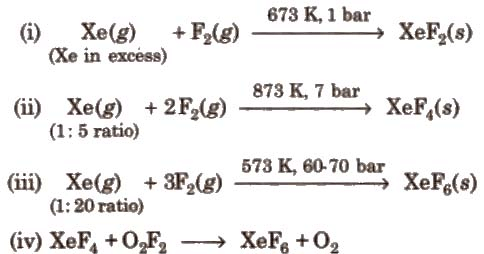