A sample of water containing soluble salts of calcium, magnesium or iron is called hard water as it is hard to get lather when soap is added to a sample of water. On the contrary, the sample of water is termed as soft water when it lathers with soap profusely. 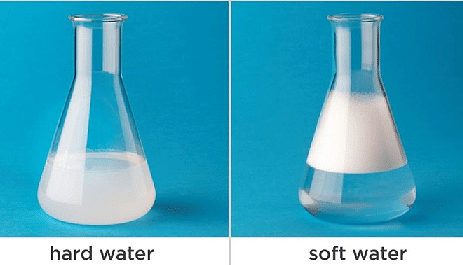 The hardness of water is of two types:Temporary Hardness: It is caused by the presence of bicarbonates of metals of calcium and magnesium, etc. These bicarbonates decompose on prolonged heating or boiling.Permanent Hardness: It is caused by the presence of sulphates, chlorides, nitrates etc. of calcium, magnesium and other metals.Softening of waterSoftening of water is mainly done by the removal of calcium and magnesium salts as the quantity of iron, aluminium and magnesium salts in water is generally very little.The following methods are adopted for softening water:-Boiling: The soluble bicarbonates decompose on boiling and are precipitated as carbonates. Clark’s method: By addition of milk of time. By adding washing soda By addition of sodium hexa-phosphates.Permutit Process: 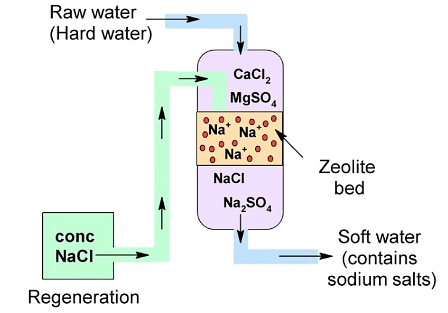 It is an artificial zeolite which is chemically known as Sodium aluminium silicate.

Ion Exchange Resins: Water is allowed to flow through a tank partly filled with the granules of a resin which removes positive ions.

Acids, Bases and Salts:AcidsA compound in reaction loses electron is called an acid. An acid is a compound which when dissolved in water has hydrogen available which can be replaced by a metal to form a salt. It is this available hydrogen which accounts for many common properties.

BasesThe compound, which in reaction accepts electron is called Base.  A base is a compound which reacts with an acid to give a salt and water. Soluble bases, e.g. NaOH, KOH, Ca(OH2) are called alkalies.

pH ValuepH is a value which represents acidity or alkalinity of an aqueous solution. It is defined as the logarithm of the reciprocal of the hydrogen ion concentration of a solution. Pure neutral solution like pure water has pH value 7. After this value the alkalinity of the solution increases. Similarly, lowering values increase acidity.

SaltsA salt is a compound which can be formed by replacing the hydrogen of an acid with a metal or its equivalent (e.g. an NH4 radical):Example: HCl + NaOH → NaCl + H2OTypes of Salts:Normal Salts: If all the replaceable hydrogen atoms are replaced by a metal ion in a reaction, then the salt formed is called normal salt.Acid Salts: The acid salts are those which give hydronium ions.

Facts to be remembered