Ans. As the mass increases, vibration decreases as a result of which the heavier isotope will be more closer to the C-atom for a longer time. Therefore C - T bond is stronger.

Q. Which are planar?

Note: They are not resonating structures rather they are tautomers.

Cyclohexane is thermodynamically more stable than benzene, even though the resonance energy of benzene is more.

Q. Find the order of Stability in the following:

➢ Mesomeric Effect in the Compounds Having a Benzene Ring

Note: Unpaired electron is not counted while calculating the hybridization state. They stay perpendicular to the plane.

Its stability can be determined with the help of hyperconjugation as well as the Resonance effect.

Q.1 Compare the stability of the following free Radicals

Sol. b > a > c, Since the resonating structure is not possible for (c)

Sol. After forming free radical from the compound:Due to 3° free radical, (a) will be most stable, therefore will have more tendency to come in this form, and C–H bond will break very readily because bond energy will be very less.

Sol. If the compound after being in free Radical form is very stable (i.e., less energy) it means it would have possessed more energy initially i.e. its potential energy will be the most. Potential energy ≈ stability of free Radical

(ii) In the above compound compare 2° benzylic allylic stability at two given positions:

Sol. (i) Stability order of free Radical that might be formed after removal of H (Homolytically) from the given carbon: e > b > a > f > c = d

Therefore, 2° benzylic allylic corresponding to structure (a) will be extra stable than (b) which have only two (C - H) bond for Hyperconjugation.

Q.5 Compare the stability of the following free Radicals. 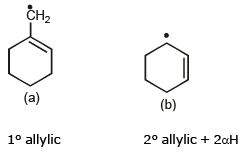 Thus, Stability of the following free Radical: c > b > a > d

Sol. After making free Radical of the above compounds:(a), (b)(c)