Input Devices or Input Units of a Computer

The most common input device is Keyboard. It is similar to type writer and also contain additional keys.

The keys on computer keyboards are classified into three categories. They are,

Alphanumeric keys – letters and numbers Punctuation keys – comma, period, semicolon, and so on. Special keys – function keys, control keys, arrow keys, and so on. Modifier keys – a special key (or combination) that temporarily modifies the normal action of another key when pressed together. For example, Shift + A gives Capital A and Alt + F4 will close the program in the active window. Toggle Keys – A toggle key toggles the input from a group of keys on a keyboard between two different input modes. The most common toggle key is Caps Lock, which toggles the letter keys between lowercase and uppercase mode. Other toggle keys are Num Lock, Scroll Lock, and Insert.

The most commonly used keyboard is called QWERTY Keyboard.

A Mouse is a device that controls the movement of the cursor or pointer on a display screen, i.e. a monitor . Its name is derived from its shape, which looks a bit like a mouse, its connecting wire that one can imagine to be the mouse’s tail.

Mouse was invented by Douglas Engelbart of Stanford Research Center in 1963.

There are three types of Mouse. They are,

Joystick was mainly used for Gaming purposes and also for CAD/CAM systems. It has a lever that moves in all directions and controls the movement of a pointer or some other display symbol. Nowadays Joystick has become an old thing and different types of Game Controllers replaced it gradually.

Scanner is a device used to convert an image of photographic prints, posters, or magazine pages into it’s digital form. High resolution scanners are used for scanning for high-resolution printing, but lower resolution scanners are adequate for capturing images for computer display. Scanners are attached to the CPU and the scanned image will be displayed on the monitor. Scanners usually come with software, such as Adobe’s Photoshop product, that makes the user to re-size and modify the captured image.

It is a device used to input the Sound. It is usually called as mic and in most of the Laptops, Mic comes in-built. Microphone is also used to enter text with voice recognition software. 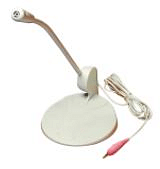 A bar code reader, also called a price scanner, is a simple hand-held input device used to capture and read information contained in a bar code. Most of the super-markets, big jewelry shops, cloth shops, etc use this Bar code Reader. It consists of a scanner, a decoder, and a cable used to connect the reader with a computer. The bar code reader simply captures and translates the bar code into numbers and/or letters, the data must be sent to a computer so that a software application can make sense of the data.

OCR devices are capable of reading data that are in typed or hand-written form. It is a combination of a scanner and a software, that converts the printed data into ASCII. It is widely used as a form of data entry from printed paper data records, whether passport documents, invoices, bank statement, receipts, business card, mail, or other documents. OCR is a field of research in pattern recognition, artificial intelligence and computer vision.

OMR is a device which senses the presence or absence of a mark. It is also known as Mark Sensing. In competive exams like UPSC, SSC and other state level public service examinations, the candidates are provided with the OMR sheet and asked to mark it. The OMR device evaluated the OMR sheets accurately and also it reduces the time to a great extent. Just imagine how much time it will take to evaluate more than 15 lakhs of OMR sheets manually.

Magnetic Ink Character Recognition is a character recognition system that uses special ink and characters. It is a character-recognition technology used mainly by the banking industry to ease the processing and clearance of cheques and other documents. The MICR encoding, called the MICR line, is at the bottom of cheques and other vouchers and typically includes the document-type indicator, bank code, bank account number, cheque number, cheque amount, and a control indicator. MICR provides a secure, high-speed method of scanning and processing information.

Web Camera is a device which is used to view image in real time. It is mostly useful in video-calling with softwares such as Skype and also used in Video-conferencing in MNCs, and also as security cameras.

A light pen device in the form of a light-sensitive wand used in conjunction with a computer’s CRT display. It allows the user to point to displayed objects or draw on the screen in a similar way to a touchscreen but with greater positional accuracy.