BIRTH OF THE WEIMER REPUBLIC

Germany fought the First World War (1914–1918) along with the Austrian empire and against the Allies (England, France and Russia). Germany initially made gains by occupying France and Belgium. However, the Allies won defeating Germany and the Central Powers in 1918. A National Assembly met at Weimer and established a democratic constitution with a federal structure. The republic, however, was not received well by its own people largely because of the terms it was forced to accept after Germany’s defeat at the end of the First World War. Many Germans held the new Weimer Republic responsible for not only the defeat in the war but the disgrace at Versailles. 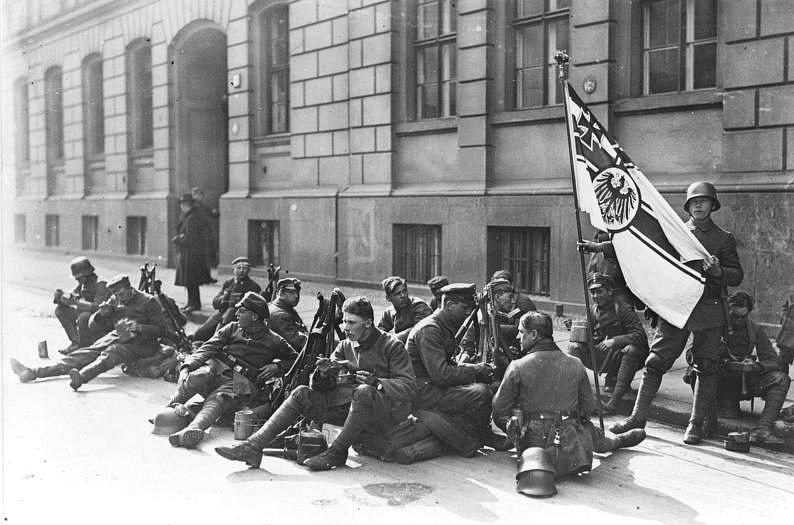 The Effects of the War — The war had a devastating impact on the entire continent both psychologically and financially. From being a creditor, Europe became a debtor. The supporters of the Weimer Republic were criticised and became easy targets of attack in the conservative nationalist circles. Soldiers came to be placed above civilians. Aggressive war propaganda and national honour became important.

Political Radicalism and Economic Crisis : The birth of the Weimer Republic coincided with the uprising of the Spartacist League on the pattern of the Bolshevik Revolution in Russia. The Spartacists founded the Communist Party of Germany. Political radicalisation was heightened by the economic crisis of 1923. As Germany refused to pay the war reparations, France occupied its leading industrial area, Ruhr. Germany retaliated with printing paper currency recklessly. The value of the mark collapsed. Prices of goods soared. There was hyperinflation.

The Years of Depression

1924–1928 saw some stability, yet it was built on sand. Germany was totally dependent on shortterm loans, largely from the USA. This support was withdrawn with the crash in 1929 of the Wall Street Exchange. German economy was hit badly. The middle class and working population was filled with the fear of proletarianisation.

The Weimer Republic had some inherent defects :1. Proportional Representation2. Article 48 — which gave the President the powers to impose emergency, suspend civil rights and rule by decree.

Hitler was born in Austria in 1889. He earned many medals for bravery in the First World War. The German defeat horrified him. The Treaty of Versailles made him furious. He joined the German Workers Party and renamed it National Socialist German Workers’ Party. This later came to be known as the Nazi Party. Nazism became a mass movement only during the Great Depression. The Nazi propaganda stirred hopes of a better future. Hitler was a powerful and effective speaker. He promised the people a strong nation where all would get employment.

The Destruction of Democracy — Hitler achieved the highest position in the cabinet of ministries on 30 January 1933. Hitler now set out to dismantle the structures of democratic rule. The Fire Decree of 28 February 1933 suspended civic rights like freedom of speech, press and assembly. Communists were hurriedly packed off to new established concentration camps. All political parties were banned. Special surveillance and security forces were created to control the people and rule with impunity.

Reconstruction : Economist Hjalmar Schacht was given the responsibility of economic recovery. This was to be done through a state funded work creation programme. Hitler pulled out of the League of Nations in 1933, reoccupied the Rhineland in 1936 and integrated Austria and Germany in 1938 under the slogan : One people, One empire, One leader. He then took Sudentenland from Czechoslovakia. Hitler had the unspoken support of England. Hitler did not stop here. He chose war as a way out of the Economic Crisis. Resources were to be accumulated through expansion of territory. In September 1940 Germany invaded Poland. This started a war with France and England. USA resisted involvement in the war. But when Japan extended its support to Hitler and bombarded Pearl Harbour, the USA entered the war. The war ended in 1945 with Hitler’s defeat and the US bombing of Hiroshima and Nagasaki in Japan.

According to Nazi ideology there was no equality between people, but only racial hierarchy. The Nazis quickly began to implement their dream of creating an exclusive racial community of pure Germans by physically eliminating all those who were considered undesirable. They wanted a society of pure and healthy Nordic Aryans. Jews, gypsies, blacks, Russian, Poles, even certain Germans and abnormals were considered undesirable. The other aspect of Hitler’s ideology related to the geopolitical concept of Lebensraum, or living space. Jews were the worst sufferers in Nazi Germany. Hitler believed in pseudoscientific theories of race which said that conversion was no solution to the Jewish problem. It had to be solved through their total elimination. From 1933–1938 — the Nazis terrorised, pauperised and segregated the Jews, compelling them to leave the country. The next phase, 1939–1945, aimed at concentrating them in certain areas and then killing them in gas chambers in Poland.

Genocide and war became two sides of the same coin. Occupied Poland was divided. Poles were forced to leave their homes and properties behind to be occupied by ethnic Germans brought in from occupied Europe.

Hitler felt that a strong Nazi society could be established by teaching Nazi ideology to children. All schools were given German teachers. Children were divided into two groups — desirable and undesirable. Textbooks were rewritten, functions of sports in schools was to nurture the spirit of violence and aggression. Ten-year-olds had to enter Jungvolk. At 14, all boys joined ‘Hitler Youth’, they joined the Labour Service at 18.

The Nazi Cult of Motherhood — Women were told to be good mothers and rear pure blooded Aryan children. They were encouraged to produce many children.

The Art of Propaganda — The Nazi regime used language and media with care and often to great effect. They used films, pictures, radio, posters, etc. to spread hatred for Jews.

Crimes against Humanity — People saw the world through Nazi eyes and spoke the Nazi language. At times even the Jews began to believe in the Nazi stereotypes about them.