The document Key Notes: Chemical Coordination & Integration NEET Notes | EduRev is a part of the NEET Course Biology Class 11.
All you need of NEET at this link: NEET

Hormones are non-nutrients chemicals which act as intercellular messengers and are produced in trace amount.According to definition of hormones, some chemicals also considered as hormones which are not produced by endocrine glands. 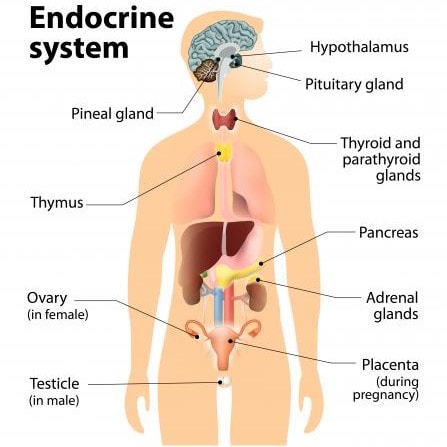 The endocrine glands and hormone producing diffuse tissue or cells are located in different part of the body. Pituitary, pineal, thyroid, adrenal, pancreas, parathyroid thymus and gonads are the organised endocrine bodies in human.

The hypothalamus, the basal part of diencephalon (fore brain) contain several group of neurosecretory cells called nuclei which produce hormones which regulate the synthesis and secretion of pituitary gland.

(ii)The inhibiting hormones: they inhibit secretion of pituitary gland. Example somatostatin from the hypothalamus inhibits the release of growth hormone from the pituitary.