For exampe: methane (CH4), ethane (C2H6), ethene (C2H4), and ethyne (C2H2), all are hydrocarbons as they are made up of only two elements: carbon and hydrogen.(b) Saturated Hydrocarbons: These are the ones in which the carbon atoms are connected by only single bonds. They are also known as alkanes.Example: Methane (CH4) and ethane (C2H6)Unsaturated Hydrocarbons: These are the ones in which two carbon atoms are connected by a double bond or a triple bond.Example: Ethene (C2H4) and ethyne (C2H2)(c) Saturated cyclic hydrocarbon: Cyclohexane, C6H12Unsaturated cyclic hydrocarbon: Benzene, C6H6(d) Hexane, C6H14 (e) (i) None (ii) Two (iii) Three (iv) Five

Question 60:A solid element X has four electrons in the outermost shell of its atom. An allotrope Y of this element is used as a dry lubricant in machinery and also in making pencil leads. (a) What is element X ? (b) Name the allotrope Y. (c) State whether allotrope Y is a good conductor or non-conductor of electricity. (d) Name one use of allotrope Y (other than lubrication and pencil leads) (e) Name two other allotropes of element X. Solution :(a) Element X : Carbon(b) Allotrope Y: Graphite(c) Y is a good conductor of electricity.(d) Y is used for making graphite electrodes or carbon electrodes in dry cells.(e) Allotropes of X: Diamond and buckminsterfullerene 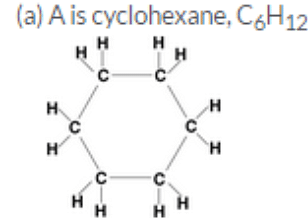 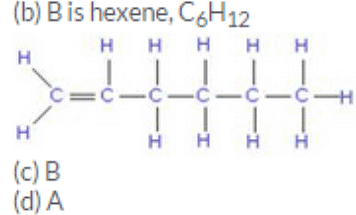 Question 62:The solid element A exhibits the property of catenation. It is also present in the form of a gas B in the air which is utilised by plants in photosynthesis. An allotrope C of this element is used in glass cutters. (a) What is element A ? (b) What is the gas B ? (c) Name the allotrope C. (d) State another use of allotrope C (other than in glass cutters). (e) Name another allotrope of element A which exists as spherical molecules. (f) Name a yet another allotrope of element A which conducts electricity. Solution :(a) Element A: Carbon(b) Gas B: Carbon dioxide(c) Allotrope C: Diamond(d) Used for making jewellery(e) Buckminsterfullerene(f) Graphite

Question 67:What is the molecular formula and structural formula of a cyclic hydrocarbon whose one molecule contains 8 hydrogen atoms ? Solution :Molecular formula: C4H8

Question 70:Which of the following hydrocarbons is unsaturated ? C3H4; C2H6 Solution :C3H4

Question 2:What is the next higher homologue of methanol (CH3OH) ? Solution :Ethanol (C2H5OH)

Question 3:Identify the functional group present in the following compound and name it according to IUPAC system : CH3OHSolution :Alcohol group;Methanol

Question 5:What is the common name of methanal ? Solution :Formaldehyde

Question 6:Write the names of the following functional groups :

Question 8:What is the common name of propanone ? Solution :Acetone

Question 9:Write the IUPAC names of the following : (i) CH3COCH3 (ii) CH3COCH2CH3 Solution :(i) Propanone(ii) Butanone

Question 11:Write the IUPAC names, common names and formulae of the first two members of the homologous series of carboxylic acids.Solution :

Question 12:What is the common name of : (a) methanoic acid, and (b) ethanoic acid ? Solution :(a) Methanoicacid – Formic acid(b) Ethanoic acid – Acetic acid

Question 13:Draw the structures for the following compounds : (a) Ethanoic acid (b) Propanoic acid Solution : 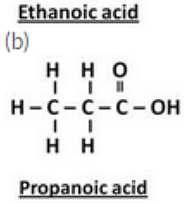 Question 14:Give the common names and IUPAC names of the following compounds : (a) HCOOH (b) CH3COOHSolution :

Question 15:Give the name and structural formula of one homologue of HCOOH. Solution :Ethanoic acid; CH3COOH

Question 18:Give the IUPAC name of the following compound : C3H7OPISolution :Propanol, C3H7OH

Question 19:Give the name and structural formula of one member of the following : Alcohols Solution :Ethanol; C2H5OH

Question 21:What is the common name of methanol ? Solution :Methyl alcohol

Question 24:State whether the following statement is true or false : The minimum number of carbon atoms in a ketone molecule is two. Solution :False