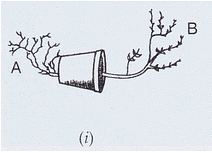 (a) Which figure shows the correct position taken by the parts A and B of the plant ?(b) What type of phenomenon is exhibited by the figure chosen in (a) above ?Solution :(a) Figure(ii)(b) Geotropism.

Question 29:Name the plant hormones which are responsible for the following effects :(a) falling of leaves(b) opening of stomata(c) bending of stem towards light (d) closing of stomataSolution :(a) Abscisic Acid(b) Cytokinin(c) Auxin(d) Abscisic Acid 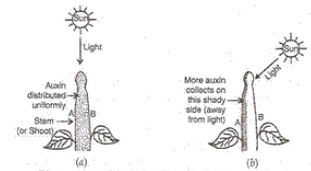 Question 36:(a) How does control and coordination take place in plants ? How does it differ from that in animals ?(b) Name five stimuli which act on plants. Name the type of tropism produced by each one of these stimuli.(c) Define hydrotropism. Give one example of hydrotropism. State whether this example is of positive hydrotropism or negative hydrotropism. Illustrate your answer with the help of labelled diagram.Solution :(a) The plants do not have a nervous system but they can sense things in the presence of stimuli such as light, touch, water etc. and respond to them by the action of hormones. Thus, the plants coordinate their behavior against environmental behavior by using organic chemicals called hormones. This is called chemical coordination. The hormones in plants coordinate their behavior by affecting the growth of a part of the plant resulting in the movement of that plant part in response to a stimulus. The control and coordination in animals takes place by both nervous system and hormones.(b)(i) Light – Phototropism.(ii) Gravity – Geotropism.(iii) Chemical – Chemotropism.(iv) Water – Hydrotropism.(v) Touch – Thigmotropism.(c) The movement of a plant part in response to water is called hydrotropism. Example: The roots of a plant always go towards water, this is positive hydrotropism.

Question 3:If we happen to touch a hot object unknowingly, we immediately pull back our hand. What is this type of action known as ?Solution :Reflex action.

Question 4:Name the three components of a neuron (or nerve cell).Solution :Cell body, dendrites and axon.

Question 6:Name the most important part of the human brain.Solution :Cerebrum.

Question 7:Which part of the brain maintains posture and balance of the body ?Solution :Cerebellum.

Question 8:State one function each of cerebellum and pons.Solution :Function:(a) Cerebellum ? It helps in maintaining posture and balance of the body.(b) Pons ? It regulates the respiration process.

Question 10:Where are hormones made in the human body ?Solution :Endocrine glands.

Question 11:What is the name of the system of glands which produces hormones ?Solution :Endocrine system.

Question 13:Name the hormones secreted by (a) testes, and (b) ovariesSolution :(a) Testosterone.(b) Progesterone and oestrogen.

Question 15:Name the disease caused by the deficiency of insulin hormone in the body.Solution :Diabetes.

Question 16:Name, the disease caused by the deficiency of thyroxine hormone in the body.Solution :Goitre.

Question 17:Which halogen element is necessary for the making of thyroxine hormone by the thyroid gland ?Solution :Iodine.

Question 19:What is the name of in-built ‘arrangement’ in our body which controls the timing and amount of hormones released by various endocrine glands in the body ?Solution :Feedback mechanism.

Question 21:What part does the diet play in helping us to have a healthy thyroid gland ?Solution :Diet provides iodine for making thyroxine hormone which keeps the thyroid gland healthy.

Question 22:If sugar is detected in the urine of a person, name the disease he is suffering from.Solution :Diabetes.

Question 23:Name two parts of the body which contain receptors of chemical stimuli.Solution :Nose and Tongue.

Question 24:Which part of the eye contains cells which are sensitive to light ?Solution :Retina.

Question 25:What are the two main communications systems in an animal’s body ?Solution :Nervous system and endocrine system.

Question 26:Which one term in each of the following includes the other three ?(a) thyroid, ductless gland, thymus, pituitary, ovary(b) adrenalin, insulin, hormone, thyroxine, estrogenSolution :(a) Ductless gland.(b) Hormone.

Question 27:Which parts of the body form the central nervous system ?Solution :Brain and spinal cord.

Question 29:Why do you need iodine in your diet ?Solution :Because iodine is necessary for making thyroxine hormone.

Question 30:State whether coughing is a voluntary action or reflex action.Solution :Reflex action.

Question 31:Fill in the following blanks with suitable words :(a) The two examples of effectors are…………. and………………(b) Our…………. system allows Us to react to our surroundings. Information from receptors passes along…………. neurons to our brain. Our brain sends impulses along………… neurons to our muscles.(c) A neuron which carries an impulse to the brain is called a……………….(d) The neuron which carries a message for action to a muscle or gland is known as a……………….Solution :(a) Muscle; glands.(b) Nervous; sensory; motor.(c) Sensory.(d) Motor.