Question 1:Where are a plant’s sex organs located ?Solution :In flowers.

Question 3:What are the reproductive organs in a flower ?Solution :Stamen and carpel.

Question 5:What is the name of female organ of a flower (other than carpel) ?Solution :Pistil.

Question 6:What is the other name of sex cells ?Solution :Gametes.

Question 7:What is the name of sex cells (other than gametes) ?Solution :Germ cells.

Question 9:Where is the male gamete formed :(i) in humans ?(ii) in flowering plants ?Solution :(i) Testes.(ii) Anther.

Question 10:Where is the female gamete formed :(i) in humans ?(ii) in flowering plants ?Solution :(i) Ovary.(ii) Ovary.

Question 15:What is the causative organism for the following diseases ?(i) Gonorrhoea (ii) Syphilis (iii) AIDSSolution :(i) Bacteria.(ii) Bacteria.(iii) Virus.

Question 16:What are the organs in humans which produce the gametes ?Solution :Testes in males and ovaries in females.

Question 17:(a) What are the male sex cells in humans called ?(b) Name the organ which produces male sex cells.Solution :(a) Sperms.(b) Testes.

Question 19:Which part of the human body :(a) produces sperms ?(b) produces ova ?(c) passes Sperms from a man to a woman ?Solution :(a) Testes.(b) Ovaries.(c) Penis.

Question 23:What is the name of the process in which thickened uterus lining alongwith blood vessels is removed from the body of a human female through vaginal bleedingSolution :Menstruation.

Question 25:Fill in the following blanks with suitable words :(a) Pollen grains contain………… gametes of a plant.(b) Ovules contain………… gametes of a plant.(c) The ovary of a flower becomes………… after fertilisation.(d) The ovule becomes a……. after fertilisation.(e) Flowering plants reproduce by…………. method of reproduction.(f) The female organ of reproduction in the flower is the………………(g) The male organ of reproduction in the flower is the……………….(h) The name of the structure in the flower in which the male gamete is formed is…………(i) The………. at the base of the carpel contains egg cells.(j) The term used to refer to the transfer of pollen from the stamen of one flower to the carpel of anotherflower of the same species is………….(k) The cells involved in sexual reproduction are called……………(l) Fusion of gametes gives rise to a single cell called …………..(m) The process of fusion of gametes is called…………(n) A multicellular animal starts its life from a……….. through sexual reproduction.(o) The union of a sperm nucleus with an egg nucleus is known as…………… and results in a……………. egg.(p) The menstrual cycle is controlled by……………..Solution :(a) Male.(b) Female.(c) Fruit.(d) Seed.(e) Sexual.(f) Carpel.(g) Stamen.(h) Anther.(i) Ovary.(j) Cross pollination.(k) Gametes.(l) Zygote.(m) Fertilisation.(n) Single cell (zygote).(o) Fertilisation; fertilised.(p) Hormones.

Question 27:(a) Write the names of (a) male sex hormone, and (b) female sex hormones.(b) What name is given to the fusion of sperm and ovum ?(c) Name the tissue through which the foetus gets all the requirements from the mother’s body.Solution :(a)(i) Testosterone.(ii) Oestrogen and Progesterone.(b) Fertilisation.(c) Placenta. 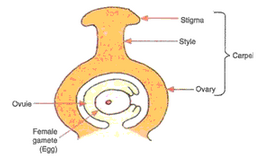 Question 32:Describe the various steps involved in the sexual reproduction in animals. Draw labelled diagrams to show the fertilisation of an ovum (or egg) by a sperm to form a zygote.Solution :The sexual reproduction in animals takes place in the following steps:(i) The male parent produces male gamete called sperms. The sperm is a small cell with a long tail (flagellum) for movement.(ii) The female parent produces female gamete called ova which is much bigger cell than the sperm, having a lot of cytoplasm.(iii) The sperm enters into the ovum and fuses with it to form a new cell called zygote and this process is called fertilisation.(iv) The zygote then divides again and again to form a large number of cells and ultimately the zygote grows and develops to form a baby.

Question 35:(a) What type of plants reproduce by sexual reproduction method ?(b) What is a seed ? What are the parts of a seed ? Explain with the help of a labelled diagram.Solution :(a) Flowering plants.(b) A seed is the reproductive unit of a plant (which can be used to grow a new plant). Plumule, radical and cotyledon are the parts of seed.

Question 36:(a) What is puberty ? Who attains puberty at an earlier age in human beings : male or female (boy or girl) ?(b) Mention two functions each of (i) human testes, and (ii) human ovaries.Solution :(a) The age at which the sex hormones begin to be produced and the boy and girl become sexually mature (able to reproduce) is called puberty. Females attain puberty at an age of 10-12 years.(b)(i) The function of testes is to make sex cells called sperms and to make sex hormone called testosterone.(ii) The function of the ovaries is to make mature female sex cell called ova or egg and also to make female sex hormones called oestrogen and progesterone.

Question 37:(a) What is gestation period ? How much is the gestation period in humans ?(b) Name one method of contraception which also protects against sexually transmitted diseases.(c) Name one sexually transmitted disease for which no definite cure has been found so far. What is the causative organism of this disease ?Solution :(a) The time period from the fertilisation up to the birth of a baby is called gestation. The average gestation period in humans is about 9 months (about 38 weeks).(b) Condoms.(c) AIDS has no cure. Its causative organism is HIV (human Immunodeficiency Virus).

Question 38:What are the three types of methods used for birth control (or regulating child birth) ? Give one example of each type.Solution :(a) Barrier method – Condom.(b) Chemical method – Oral pills.(c) Surgical method – Vasectomy.

The document Lakhmir Singh & Manjit Kaur: How do Organisms Reproduce?, Solutions- 3 - Notes | Study Science Class 10 - Class 10 is a part of the Class 10 Course Science Class 10.
All you need of Class 10 at this link: Class 10
Attempt Now
Join Course