Question 26:Describe the layering method for the artificial propagation of plants. Illustrate your answer with the help of a labelled diagram. Name any five plants which are propagated by the layering method.Solution :Layering – In this method, a branch of the plant is pulled towards the ground and the part of it is covered with moist soil leaving the tip of the branch exposed above the ground. After some time, new roots develop from the part of the branch buried in the soil. The branch is then cut off from the parent plant. The part of the plant which has developed roots grows to become a new plant. The layering method is used for the propagation of plants like Jasmine, Strawberry, Raspberry, Lemon and Guava.

The Propagation of jasmine plant (chameli) by the layering method

Question 28:(a) Can you consider cell division as a type of reproduction in unicellular organisms ? Give reason.(b) What is a clone ? Why do offsprings formed by asexual reproduction exhibit remarkable similarity ?Solution :(a) Yes, because it leads to the formation two daughter cells.(b) The new organisms produced by one parent through asexual reproduction (which are genetically identical to the parent) are called clones. The offspring’s formed by asexual reproduction exhibit remarkably similarity because the replication of DNA in the cells is done by certain biochemical reactions which synthesise more of genetic material. When the DNA already present in the nucleus of the parent cell is replicated by making more DNA at the time of asexual reproduction then slight variations come in the two copies formed. Due to this the two DNA molecules formed will be similar but not identical.

Question 30:(a) What is a tuber ? Name one stem tuber and one root tuber.(b) What is name of the organ of propagation present in a tuber ?(c) Name one commonly used vegetable which is propagated by using tubers.Solution :a) A tuber is the thickened, underground stem (or root) of a plant which is swollen with stored food. Stem tuber: Potato; Root tuber: Sweet potato. (b) Buds. (c) Potatoes.

Question 31:(a) What is meant by vegetative propagation ?(b) Vegetative propagation involves the growth and development of ‘something’ present in the old part of the plant to form a new plant. What is this ‘something’ ?(c) Why do green grass plants spring up in dry fields on their own after the rains ?Solution :(a) Vegetative propagation is an asexual method of reproduction in which new plants are obtained from the parts of old plants (like stems, roots and leaves) without the help of any reproductive organs.(b) Buds.(c) The fields have dry stems of the old grass plants all over them. These dry stems have buds which are in the inactive state. By getting rainwater, the buds present on the dry grass stems get activated and grow to produce new grass plants.

Question 32:(a) Explain how, new Bryophyllum plants can be produced from the leaves of the old plant ? Illustrate youranswer with the help of a labelled diagram.(b) How can you grow money plant bv vegetative propagation ?Solution :(a) Bryophyllum can be reproduced by vegetative propagation by using either a piece of its stem or leaves. The leaves of a Bryophyllum plant have special buds in their margins which may get detached from the leaves, fall to the ground and then grow to produce a new plant. 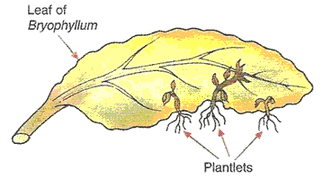 (b) Money plant can be grown by vegetative propagation by using a piece of its stem which has at least one leaf on it. One end of the stem is dipped in water and after a few days new roots appear at the point where the leaf was attached. This piece of stem grows gradually into a new money plant.

Question 36:(a) Name the method by which bread mould (Rhizopus fungus) reproduces. Is this method sexual or asexual ?(b) What is yeast ? Describe the process of reproduction in yeast with the help of labelled diagrams.(c) Name a tiny fresh-water animal which reproduces by the same method as that of yeast ? What is this method known as ?(d) Name two marine organisms which also reproduce by the same method as yeast but form colonies.Solution :(a) Spore formation; asexual reproduction.(b) Yeast is tiny, unicellular non green plant which reproduces by budding. In yeast, first a bud appears on the outside of the cell wall. The nucleus of the parent yeast cell divides into two parts and one part of the nucleus moves into the bud. Ultimately, the bud separates off from the parent yeast cell and forms a new yeast cell.

Yeast reproducing by the method of budding

Question 37:(a) What is meant by ‘grafting’ as a means of propagation in plants ?(b) Define ‘stock’ and ‘scion’.(c) Describe the grafting method for the artificial propagation of plants with the help of labelled diagrams.(d) Name two fruit trees which are usually propagated by grafting method.(e) State two advantages of grafting method of artificial propagation of plants.(f) What is the difference between the cuttings method and grafting method for the artificial propagation of plants ?Solution :(a) Grafting – It is a method in which the cut stems of two different plants (one with roots and other without roots) are joined together in such a way that the stems join and grow as a single plant.(b) The cut stem of a plant having roots is called stock and the cut stem of the other plant without roots is called scion.(c) In grafting, two plants are chosen which are used as scion and stock. First the stem is removed from the plant chosen to be made scion by giving a slanting cut. The scion is placed over the stock and is fitted together by binding tightly by a piece of cloth or plastic sheet. The cut soon heals and the stock and scion of two plants grow together to become one plant. The grafting method for the artificial propagation of plants (or trees)

(d) Banana and pineapple.(e) Advantages of grafting method:(i) It enables us to combine the most desirable characteristics of the two plants in its flowers and fruits.(ii) It can be used to produce varieties of seedless fruits.(f)CuttingGrafting(i) A small part of the plant which is removed by making a cut with a sharp knife is called cutting.(ii) The new plant formed is exactly similar to the parent plant.(i) It is a method in which the cut stems of two different plants (one with roots and other without roots) are joined together in such a way that the stems join and grow as a single plant.(ii) The new plant produced has the characteristics of both the parent plants.

Question 38:(a) What is tissue culture ?(b) Name any four types of ornamental plants which are being produced by tissue culture technique.(c) What is the importance of DNA copying in reproduction ? Explain with an example.(d) How does reproduction help in providing stability to populations of species ?(e) Why is variation during reproduction beneficial to the species but not necessarily for the individual ?Solution :(a) The production of new plants from a small piece of plant tissue (or cells) removed from the growing tips of a plant in a suitable growth medium is called tissue culture.(b) Orchids, dahlia, carnation, chrysanthemum.(c)(i) The chromosomes in the nucleus of a cell contains information for the inheritance of features from the parents to the next generation in the form of DNA molecules so the characteristics of a parent organism are transmitted to their offsprings.(ii) When the DNA already present in the nucleus of a parent cell is copied by making more of DNA by certain biochemical reactions, then slight variations come in the two copies formed. Thus, variations are produced in the offspring’s during reproduction which form the basis of evolution. Example: Offspring’s produced by asexual reproduction have slight variations from their parents.(d) The process of reproduction introduces some variations in the individual organisms of a species which enables them to survive even in adverse environmental conditions such as excessive heat or cold, etc. In this way, the introduction of variations during reproduction provides stability to the populations of various species.(e) Variation is useful for the survival of species even in adverse environmental conditions. This happens as follows: There may be some drastic changes like excessive heat or cold etc in the habitat of a species of organisms. If all the organisms of a population living in that habitat are exactly identical, then there is a danger that all of them may die and no one would survive under these conditions. This will eliminate the species from that habitat completely however, if some variations are present in some individual organisms to tolerate these drastic changes then there is a chance for them to survive and flourish even in adverse environment. Example: Certain bacteria living in temperate water – If the temperature of water increases too much due to global warming most of them will not be able to tolerate excessive heat and would die however, if there are bacteria with variation then there is a chance for them to survive.

Question 39:(a) What is a ‘cutting’ in respect of plants for propagation purposes ?(b) What care should be taken while making a cutting from a plant ?(c) Describe the cuttings method for the artificial propagation of plants. Illustrate your answer with the help of labelled diagrams.(d) Name any two plants which are usually propagated by the cuttings method.Solution :(a) A small part of the plant which is removed by making a cut with a sharp knife is called cutting. (b) While making a cutting, care should be taken to see that there are some buds on it. (c) In this method, a cutting of the parent plant having some buds on it is taken and its lower part is buried in the moist soil. After few days, the cutting develops roots and shoot, and grows into a new plant which is exactly similar to the parent plant.3(d) Rose and Bougainvillea.

The propagation of plant by 'cutting' method

The document Lakhmir Singh & Manjit Kaur: How do Organisms Reproduce?, Solutions- 2 - Notes | Study Science Class 10 - Class 10 is a part of the Class 10 Course Science Class 10.
All you need of Class 10 at this link: Class 10
Attempt Now
Join Course