Question 40:(a) Describe the surgical methods of birth control (i) for men, and (ii) for women.(b) Name two devices used in the barrier method of birth control.Solution :(a)(i) Vasectomy(ii) Tubectomy.(b)(i) Condom(ii) Diaphragm.

Question 41:(a) What is meant by contraception ? What are the different methods of contraception ?(b) What is done in the contraception method known as (i) vasectomy, and (ii) tubectomy ?(c) If a woman is using copper-T for contraception, will it protect her from sexually transmitted diseases ?Solution :(a) The prevention of pregnancy in women (by preventing fertilisation) is called contraception. There are 3 methods of contraception:(i) Barrier method(ii) Chemical method(iii) Surgical method.(b)(i) Vasectomy – In males, a small portion of the sperm duct (Vasdeferens) is removed by surgical operation and both the cut ends are ligated properly. This prevents the sperms from coming out.(ii) Tubectomy – In females, a small portion of the oviducts is removed by surgical operation and the cut ends are ligated. This prevents the ovum from entering into the oviducts.(c) No.

Question 43:(a) What substances are contained (i) in oral pills, and (ii) in vaginal pills, used as contraceptives ? How dothey work ?(b) How does copper-T prevent pregnancy ?(c) Name the disease caused by HIV.Solution :(a) (i) The oral pills contain hormones which stop the ovaries from releasing ovum into the oviduct. (ii) The vaginal pills contain the chemicals called spermicides which kill the sperm.(b) Copper- T is effective in preventing pregnancy. It is placed inside the uterus and it prevents the flow of sperms in the uterus.(c) AIDS.

Question 44:(a) What is the name of surgical method of birth control (or preventing pregnancy) which is carried out (i) inmen, and (ii) in women ?(b) Name the part of a seed which (i) contains stored food (ii) grows into root, and (iii) grows into shoot.Solution :(a)(i) Vasectomy(ii) Tubectomy.(b)(i) Cotyledons(ii) Radicle(iii) Plumule.

Question 47:(a) What would be the ratio of chromosome number between an egg and its zygote ?(b) Distinguish between a gamete and a zygote.Solution :(a) 1:2.(b)GameteGamete represents the sex cell or germ cell in sexual reproduction and it is of two types: Male gametes (Sperm) and Female gamete (Eee).ZygoteIt is the product of fertilization in which a male and a female gamete fuse with each other. 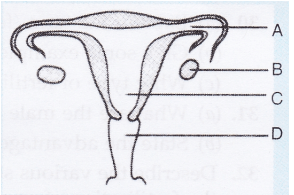 Question 50:Why is it an advantage for the testes to be situated in the scrotal sac outside the main body cavity ? Can you think of one disadvantage ?

Question 52:People who die from AIDS are not killed by the virus itself. Explain.Solution :AIDS damages the body’s immune system so that the body becomes weak and cannot protect itself against infection thus the virus does not kill the humans directly.

Question 53:(a) What is the life support system of a fetus ?(b) How long does a human baby take to develop before birth ?(c) What is the name of the narrow opening between the uterus and the vagina.Solution :(a) Placenta.(b) About 9 months.(c) Cervix.

Question 54:(a) What is meant by ‘unisexual flowers’ and ‘bisexual flowers’ ? Give two examples of each.(b) What is pollination ? How does pollination occur ?(c) Describe the process of fertilisation in a flower with the help of labelled diagrams.(d) What changes take place in the flower after fertilisation which lead to the formation of seeds and fruit ?Solution :(a) The flowers which contain only one sex organ, either stamens or carpels are called unisexual flowers like Papaya and watermelon plants. The flowers which contain both the sex organs i.e. both the stamen and the carpel are called bisexual flowers like Hibiscus and Mustard plant.(b) The transfer of pollen grains from the anther of a stamen to the stigma of a carpel is called pollination. It takes place when pollen grains are carried from the anther to the stigma of the flower. (c) When a pollen grain falls on the stigma of the carpel, it bursts open and grows into a pollen tube downwards through the style towards the female gamete in the ovary. A male gamete moves down the pollen tube and enters the ovule in the ovary. The tip of the pollen tube bursts open and male gamete comes out of the pollen tube which combines with the nucleus of the female gamete present in the ovule to form a fertilised egg called zygote.

Fertilisation in a flower

(d) The fertilised egg divides several times to form an embryo within the ovule which develops a tough coat around it and is gradually converted into a seed. The ovary of the flower develops and becomes a fruit with seeds inside it. 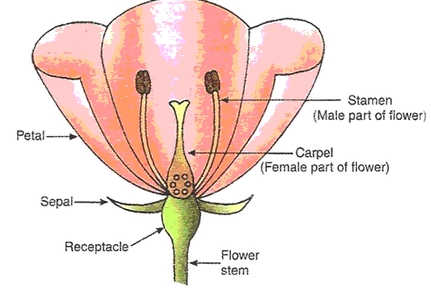 Diagram to show the parts of a flower

Question 56:(a) What changes are seen in boys at the time of puberty ?(b) Name the organs which produce sperms in human males.(c) Draw a labelled diagram of the human male reproductive system. With the help of this diagram, describe the working of human male reproductive system ?(d) What is the role of seminal vesicles and prostrate gland in human male reproductive system ?Solution :(a) The changes observed in boys during puberty are: Hair grows under armpits, pubic region between the thighs, chest and face. Body becomes more muscular due to the development of muscles. The voice deepens. Chest and shoulder broaden. The penis and testes become larger. Feelings and sexual drives associated with adulthood begin to develop.(b) Testes.(c) Working of human male reproductive system: The human male reproductive system consists of:(i) Testes – Are the primary reproductive organs in males which are in pair. These are oval shaped organs which lie outside the abdominal cavity. It makes the male sex cells called sperms and produces male sex hormones called testosterone.(ii) Scrotum – Is a muscular pouch which houses the testes. It is present outside the abdominal cavity and maintains a lower temperature than the normal body temperature.(iii) Epididymis – The sperms formed in the testes goes into a coiled tube called epididymis which stores the sperms temporarily.(iv) Vas Deferens (sperm duct) – It is a long tube which carries the sperms from epididymis to another tube called urethra.(v) Seminal vesicles and prostrate gland – Both these glands are present along the path of vas deferens and add their secretions to sperms which allows them to transport easily.(vi) Penis – It is an organ which pass?s the sperms from the man’s body into the vagina in the women’s body during mating.(d) The secretions of seminal vesicles and prostrate gland provide nutrition to the sperms and also make their transportation easier by secreting a thick liquid. Question 57:(a) What changes are seen in girls at the time of puberty ?(b) Name the organs which produce ova (or egg cells) in human females.(c) Draw a labelled diagram of the human female reproductive system. With the help of this diagram, explain the working of human female reproductive system.(d) Describe the process of fertilisation in humans and development of embryo briefly.Solution :(a) The changes observed in girls during puberty are: Hair grows under armpits and pubic region. Mammary glands develop and breasts become enlarged. The hips broaden and extra fat is deposited in various parts of the body like hips and thighs. Fallopian tubes, uterus and vagina enlarge. Ovaries start to release eggs and menstruation starts. Feelings and sexual drives associated with adulthood begin to develop.(b) Ovaries.(c) Working of human female reproductive system: The human female reproductive system consists of:(i) Ovaries – These are the primary reproductive organs in women. They are oval shaped organs which are inside the abdominal cavity of a woman near the kidneys and produces mature female sex cells called ova or eggs. They also produce female sex hormones called Oestrogen and Progesterone. Each ovary is composed of several thousand follicles which mature to form ripe eggs at puberty.(b) Oviduct – These are paired tubes which have funnel shaped openings that cover the ovaries. The ovum released by an ovary goes into the oviduct through its funnel shaped opening. The fertilisation of egg by a sperm takes place in it. It is also known as fallopian tube.(c) Uterus – It is a bag like organ in which the fertilised egg develops into a baby. It is connected through a narrow opening called cervix to another tube called vagina. It is commonly called womb.(d) Vagina – It is a tubular structure. It receives the penis for putting sperms into the women’s body. It is also called birth canal because it is the passage through which the baby is born. 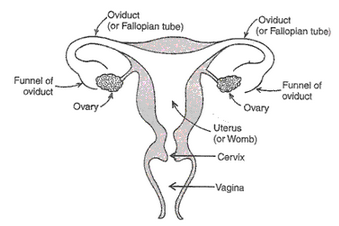 Question 58:(a) What is ovulation ? How often does it happen in human females ?(b) Where does fertilisation take place in human females ?(c) Explain why, fertilisation is possible if mating takes place during the middle of menstrual cycle.(d) What is meant by implantation ?(e) What is placenta ? What is its function ?(f) What joins embryo to placenta in mother’s body ?Solution :(a) The release of an ovum from an ovary is called ovulation. In human females, the ovaries start releasing ovum once every 28 days from the age of puberty.(b) Oviducts.(c) Fertilisation is possible if mating takes place during the middle of menstrual cycle because in a normal healthy girl the ovulation takes place on the 14th day of the beginning of menstrual cycle of 28 days.(d) The embedding of embryo in the thick lining of the uterus is called implantation.(e) Placenta – Placenta is a disc like special tissue which develops between the uterus wall and the embryo after implantation. Its function is the exchange of nutrients, oxygen and waste products between the embryo and the mother.(f) Umbilical cord.

The document Lakhmir Singh & Manjit Kaur: How do Organisms Reproduce?, Solutions- 4 - Notes | Study Science Class 10 - Class 10 is a part of the Class 10 Course Science Class 10.
All you need of Class 10 at this link: Class 10
Attempt Now
Join Course