Question 23:Give an example of a four step food chain operating in grassland. Name the secondary consumer in this food chainSolution :

The secondary consumer  is frog

(b) If we kill all the organisms in one trophic level, then the transfer of food (and energy) to the next trophic level will stop due to which the organisms of next trophic level will starve and die or migrate to other areas. The killing of all the organisms in one trophic level will also lead to the overpopulation of organisms in the previous trophic level. These effects will cause an imbalance in the ecosystem. For example, if we kill all the herbivorous animals like deer, rabbits, etc., in a forest, then the carnivorous animals like lions, tiger, etc., will not get food. Due to this, the lions and tigers etc., will starve and die or migrate from forest and go towards human settlements and attack people. Moreover, in the absence of herbivores like deer, rabbits, etc., the population of the previous trophic level ‘plants’ (or vegetation) will increase too much (because there are no deer or rabbits to eat them). All these effects will create an imbalance in the ecosystem.

Question 27:Consider the food chain :Grass → Deer → LionWhat will happen if all the lions are removed from the above food chain ?Solution :If all the lions are removed, then there will be no predator control over the population of deer due to which its populations will greatly increase and deer will eat all grass. Over grazing will eliminate the grass and other green plants completely and turn the lush green forest into a desert area having no vegetation at all.

Question 28:The number of malaria patients in a village increased tremendously when large number of frogs were exported from the village. What could be the cause for it ?Solution :Frogs eat up mosquitoes. In the absence of frogs, the number of mosquitoes increase too much and spread malaria.

Question 35:Construct (a) a long food chain, and (b) a short foodchain, ending with man.Solution :

Question 38:What will be the consequence of the absence of decomposers in the ecosystem ?Solution :In the absence of decomposers, the dead bodies of plants and animals would keep lying as such and the elements of plant and animal bodies would never be returned to their original pool like soil, air and water. The cycling process of life and death would be disrupted. The nutrient pool will not be replenished and would exhaust soon.

Question 39:Give two differences between food chain and food web.Solution :

Question 43:(a) Define an ecosystem. Give examples of any two ecosystems.(b) List the biotic and abiotic components of an ecosystem.Solution :(a) An eco system is a self contained unit of living things(plants, animals and decomposers), and their non living environment (soil, air and water). Example – a grassland and a forest.(b)

b) The interconnected food chains operating in an ecosystem which establish a network of relationships between various species is called a food web. 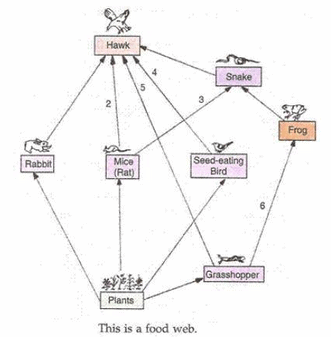 In this food web, we can see a network of numerous pathways along which the food flows within grass land community. This food web starts from the plants which is producer and end in top carnivore hawk.

Question 45:(a) What is meant by ‘environment’ ?(b) What type of substances are the major pollutants of the environment ? Name two such substances.(c) Name the organisms whose uncontrolled activities are damaging the environment.(d) Explain why, it is better to use paper bags than plastic bags.Solution :(a)The physical and biological world together is called environment.(b) The non- biodegradable wastes pollutes the environment like plastic and polythene bags.(c) Human beings are the only organisms which change the natural environment to fulfill their needs. The uncontrolled activities of human beings are damaging the balanced and healthy environment.(d) Paper bags should be used for shopping because these are biodegradable whereas plastic bags are non- biodegradable.

The document Lakhmir Singh & Manjit Kaur: Our Environment, Solutions- 2 - Notes | Study Science Class 10 - Class 10 is a part of the Class 10 Course Science Class 10.
All you need of Class 10 at this link: Class 10
Attempt Now
Join Course