Question 1:What percentage of the solar energy is trapped and utilised by the plants ?Solution :1%.

Question 2:What percentage of energy available at the producer level is transferred at successive trophic levels in a food chain ?Solution :10%.

Question 3:Name the process in which a harmful chemical enters the food chain and gets concentrated at each trophic level.Solution :Biological Magnification.

Question 4:In a food chain consisting of grass, frog, bird and insects, where will the concentration of the harmful chemicals be maximum ?Solution :Bird.

Question 5:If a harmful chemical enters a food chain comprising cat, mice and plants, which one of these organisms is likely to have the maximum concentration of the harmful chemical in its body ?Solution:Cat.

Question 8:Name two waste materials which can be recycled.Solution :Paper and Plastics.

Question 9:Name the process by which the volume of solid wastes can be reduced.Solution :Incineration.

Question 11:State whether the following statement is true or false :Only 10 per cent of the light energy given by the sun is available for transfer at each higher trophic level in a food chain.Solution :False.

Question 12:Where does all the energy in living organisms originate from ?Solution :Sun.

Question 13:Why are there rarely more than five links (or five organisms) in a food chain ?Solution:Because after that the energy available for the next organism will be so small that it will be insufficient to sustain the life of that organism.

Question 14:Name two predators of snakes in a food web operating in a forest ecosystem.Solution :Peacock and hawk.

Question 16:What is ten per cent law ? Explain with an example.Solution :Ten PerCent Law – According to ten per cent law, only 10 per cent of the energy entering a particular trophic level of organisms is available for transfer to the next higher trophic level.Example – Suppose 1000 Joules of light energy emitted by the sun falls on the plants. Consider a food chain:

Question 20:Explain how harmful chemicals enter our bodies.Solution :Pesticides are poisonous chemical substances which are sprayed over crop plants to protect them from pests (harmful small animals) and diseases. These chemical pesticides mix up with soil and water. From soil and water, these pesticides are absorbed by the growing plants alongwith water and other minerals. When herbivorous animals eat plant food, then these poisonous chemical pesticides go into their bodies through the food chain. And when the carnivore animals eat herbivores, then the pesticides get transferred to their bodies. Man being an omnivore; eat plant food as well as herbivores. So the pesticides present in plant food and herbivores also get transferred to the man’s body through food. Thus, pesticides enter the food chain at the producer level (plant level) and in the process of transfer of food through food chains these harmful chemicals get concentrated at each trophic level.

Question 21:‘If we excessively use pesticides to protect the crops from diseases, then it may cause long-term damage to mankind’. Justify this statement.Solution :Pesticides are non – biodegradable chemicals, so they get accumulated at each trophic level. Since humans occupy the top level in any food chain, so the maximum amount of harmful chemical pesticides gets accumulated in our bodies. This damages our health gradually.

Since the peacock occurs at the highest trophic level (on the extreme right side) in this food chain, it will have the maximum concentration of harmful chemicals in its body.

Question 24:What is garbage ? What does garbage consist of ?Solution :The household wastes are called garbage. It includes left -over food, fruit and vegetable peels, waste paper, unwanted plastic objects etc.

Question 26:How can the wastes such as paper, plastic and metal objects be disposed of ?Solution :The solid wastes like papers, plastics and metals are recycled. For example – waste paper is send to paper mills where it is reprocessed to form new paper once again.

Question 28:What is meant by incineration ? For what purpose is it used ?Solution :Incineration means reducing to ashes. It is used to destroy the household waste, chemical waste and biological waste.

Question 31:What is sewage ? How is sewage disposed of ?Solution :The dirty drain water containing urine and faeces which is carried from our homes by the underground pipes (called sewers) is called sewage. Sewage is disposed off by treating it at the sewage treatment plant (or sewage works). The treatment of sewage produces clean water which is discharged into the river. The organic matter present in sewage is ‘digested’ in the digesters of sewage treatment plant to produce ‘sewage gas’ (which is kind of biogas) and manure.

Question 34:(a) With the help of a flow diagram, describe how energy from the sun flows through various trophic levels.(b) Explain why, the flow of energy in the ecosystem is said to be unidirectional.Solution :(a) The energy from sun flows through various trophic levels. The food and energy are transferred from producer organisms to herbivores and from herbivores to carnivores, through the food chain. First Step – The green plants trap solar energy with the help of green pigment called chlorophyll which converts the sunlight energy into chemical energy. This gets stored as carbohydrates in the plants. About 1% of the sun’s energy falling on the leaves is used by the plants in the process of photosynthesis and stored as chemical energy of food. The plants utilize the stored energy for their metabolic activities like respiration and growth. Some of the energy is not utilised and it is released as unusable heat into the environment. Second Step – The plants are eaten up by herbivores and the chemical energy of plants is transferred to them. The herbivores utilize this energy for various metabolic activities and release unused energy as heat energy to the environment.Third Step – The herbivores are eaten up by carnivores. The chemical energy stored in the flesh of herbivores is transferred to the carnivores and they utilise this energy for their metabolic activities like respiration and growth and some of the energy which remains unutilised, is released into the environment. This process of transfer of energy is repeated with large carnivores and so on. 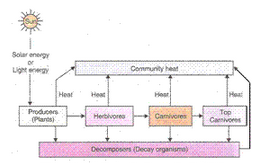 Diagram to show the transfer of energy in a food chain

(b) The flow of energy in the ecosystem is said to be unidirectional because the energy lost as heat from the living organisms of a food chain cannot be reused by plants in photosynthesis.

Question 35:(a) What is ozone ? How is it formed ?(b) How does ozone layer protect us from harmful effects in the environment ?(c) What is UNEP ? What step has been taken by UNEP in 1987 to prevent too much damage to the ozone layer ?Solution :(a) Ozone is a poisonous gas. It is made up of three atoms of oxygen combined together. It is formed high up in the atmosphere by the action of ultraviolet radiation on oxygen gas. The high energy ultraviolet radiation (UV radiation) coming from the sun splits oxygen gas into free oxygen atoms.

(b) Ozone layer protect us from harmful effects as it absorbs most of the ultraviolet radiations coming from the sun and prevents them from reaching the earth.(c) UNEP – United Nation Environment Program. In 1987, in an attempt to protect ozone layer, the United Nations Environment Program (UNEP) forged an agreement among its member countries to freeze CFC production at 1986 levels.

Question 36:(a) How is energy introduced into the ecosystem ?(b) Consider the following food chains :

Solution :(a) The energy enters the living components of the ecosystem through the process of photosynthesis.(b) (i) The producer level in the food chain are plants, so 100 J of energy is available in plants as food. Applying the 10% law to the above food chain:

(ii) The producer level in the food chain is plants, so 100 J of energy is available in plants as food. Applying the 10% law to the above food chain:

Hawks will get more energy in food chain

Question 37:(a) Explain why, a food chain usually cannot have more than three or four steps.(b) Calculate the amount of energy that will be available to big fish in the following food chain, if 10,000 J of energy is available to small algae from the sun :Small algae —-> Zooplankton —-> Fish —-> Big fishSolution :(a) Food chain generally consists of three or four steps because after that the energy available for the next organism will be so small that it will be insufficient to sustain the life of that organism.(b)

Question 38:(a) Name and state the law given by Lindeman which tells us how much energy entering a particular trophiclevel of organisms is available for trasnsfer to the next higher trophic level.(b) How much energy will be available to hawks in the food chain comprising hawk, snake, paddy and mice, if 10,000 J of energy is available to paddy from the sun ?Solution :(a) The law given by Lindeman is 10% law. According to 10% law, only 10% of the energy entering a particular trophic level of organisms is available for transfer to next higher trophic level.(b)

The document Lakhmir Singh & Manjit Kaur: Our Environment, Solutions- 3 - Notes | Study Science Class 10 - Class 10 is a part of the Class 10 Course Science Class 10.
All you need of Class 10 at this link: Class 10
Attempt Now
Join Course