The period that followed Rig Vedic Age is known as Later Vedic Age. This age witnessed the composition of three later Veda Samhitas namely, the Samaveda Samhita, the Yajurveda Samhita, the Atharvaveda Samhita as well as Brahmanas and the Upanishads of all the four Vedas and later on the two great epics—the Ramayana and the Mahabharata. 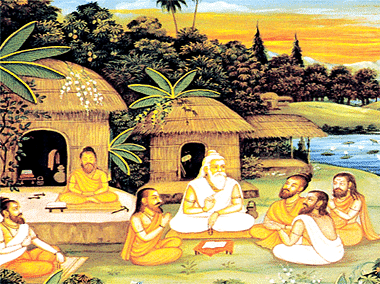 A pathshala in Vedic AgeThe spread of Aryans over the whole of India completed before 400 B.C. Of the new kingdoms in the east, the most important were Kuru, Panchala, magadha, and Koshala.Gradually the Aryans moved towards South India. It is believed that their southern movement began during the period of Brahmana literature, about 1000 B.C. and went on steadily till they reached the southernmost extremity of the Peninsula in or sometime before fourth century B.C. 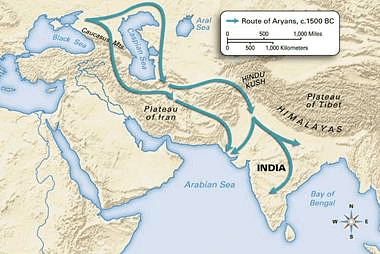 (i) Rise of Big States: With the progress of Aryan settlements in the eastern and southern part of India, the small tribal states of Rig Vedic period replaced by powerful states. Many famous tribes of Rig Vedic period like Bharatas, Purus, Trismus and Durvasa passed into oblivion and new tribes like the Kurus and Panchalas rose into prominence. The land of the Yamuna and Ganga in the east which became the new home of the Aryans rose into prominence.

(ii) Growth of Imperialism: With the emergence of big kingdoms in the Later Vedic Age the struggle for supremacy among different states was of frequent occurrence. The ideal of Sarbabhauma or universal empire loomed large in the political horizon of ancient India. The sacrifices like Rajasuya and Ashvamedha were performed to signify the imperial sway of monarchs over the rivals. 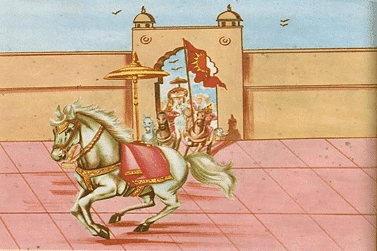 Ashvamedha RitualThese rituals impressed the people with the increasing power and prestige of the king. The Rig Vedic title of “Rajan” was replaced by the impressive titles like Samrat, Ekrat, Virat, Bhoja etc. These titles marked the growth of imperialism and feudal ideas.Origin of Kingship: There were two theories regarding the origin of kingship. The Aitareya Brahmana explained the rational theory of election by common consent of origin of kingship. Side by side the taittiriya Brahman explained the divine origin of kingship. It explained how Indra, “though occupying a low rank among the gods, was created their king by Prajapati.”

Growth of Royal Power: The king had absolute power. He became the master of all subjects. He realized taxes like “bali”, “sulka” and “bhaga”. The Satapatha Brahmana described the king to be infallible and immune from all punishment. The sabha of the Rig Vedic Period died. The king sought the aid and support of the Samiti on matters like war, peace and fiscal policies. There are references to the Samiti sometimes electing or re-electing a king. 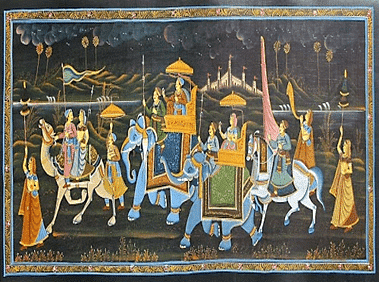 Social Condition during Vedic PeriodChanges of far greater significance were gradually taking place in their society.

(i) Caste Society: Most important change was the evolution of caste system. Various sub castes evolved in addition to the traditional four-castes.

The Brahmana and Kshatriyas emerged as the two leading castes out of the general mass of population, known as Vaishyas. The Vaishyas were superior to the sudra but their position was steadily deteriorating.The Aitareya Brahmana clearly indicates the absolute dependence of Vaishyas on the two higher classes. The Sudras were held in great contempt. 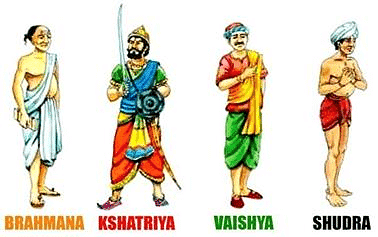 (ii) Education: A vast mass of vedic literature as well as a highly developed intellectual life speaks abundantly about a well-planned system of education in the later Vedic Period. The students had to learn Vedas, Upanishad, grammar, law, arithmetic and language.(iii) Position of women: The women lost their high position which they had in the Rig Vedic Age. They were deprived of their right to the Upanayana ceremony and all their sacraments, excluding marriage, were performed without recitation of Vedic mantras. Polygamy prevailed in the society. Many of the religious ceremonies, formerly practiced by the wife, were now performed by the priests.

She was not allowed to attend the political assemblies. Birth of a daughter became undesirable—for she was regarded as a source of misery. The custom of child marriage and dowry crept in. The women lost their honored position in the society.

Like political and social conditions, the economic condition of the Aryans of the later Vedic period also underwent significant changes. Due to the emergence of caste system various occupations also appeared.(i) Agriculture: The Aryans of the later Vedic period lived in the villages. In the villages small peasant owners of land were replaced by big landlords who secured possession of entire villages. Agriculture was the principal occupation of the people. Improved method of tilling the land by deep ploughing, manuring and sowing with better seeds were known to the Aryans. More lands were brought under cultivation.(ii) Trade and Commerce: With the growth of civilization, the volume of trade and commerce had increased by leaps and bounds. Both inland and overseas trades were developed. Inland trade was carried on with the Kiratas inhabiting the mountains. They exchanged the herbs for clothes, mattresses and skins. The people became familiar with the navigation of the seas. Regular coinage was not started.(iii) Occupation: The emergence of caste system brought varieties of means of livelihood. There are references about money lenders, chariot makers, dyers, weavers, barbers, goldsmiths, iron smiths, washer men, bow makers, carpenters, musicians etc. The art of writing probably developed in this period. The use of silver was increased and ornaments were made out of it.

During the later Vedic period the religious spirit underwent a great change. Religion was overshadowed with rites and rituals. New gods and goddesses emerged during this period.(i) New Gods: The Rig Vedic gods, Varun, Indra, Agni, Surya, Usha etc. lost their charm. The people worshipped them with less zeal. New gods like Siva, Rupa, Vishnu, Brahma etc. appeared in the religious firmament of the Later Vedic Period. The grandeur of the Rigvedic gods passed into oblivion, though we find in Atharvaveda the omniscience of Varuna or the beneficence of the Earth goddess. 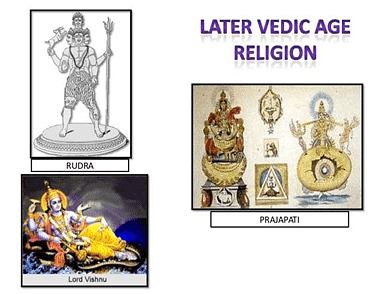 (ii) Rituals and Sacrifices: During this period the rites and ceremonies of Vedic religion were elaborated and become complex. In the Rig Vedic age Yajnas were a simple affair which every householder could do. But in the later Vedic age sacrifice became an important thing in worship. Now the priestly class devoted their energy to find out the hidden and mystic meaning of the rites and ceremonies. 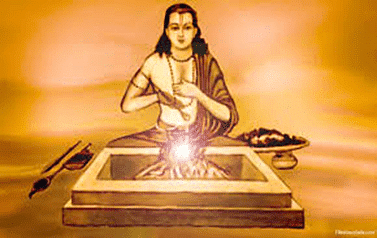 Later Vedic period is marked by lineages of clans, and small kingdoms developed in many parts of the Ganga valley, leading to the development of the state after 600 BCE. The idea of janapada and rashtra as territorial units had developed. The raja wielded much power and the social divisions began to strike deep roots. The varna system had developed well and Sudra identity became more marked during this period.

To practice questions of "Later Vedic Period", attempt the tests given below: