The document Making Of The Constitution UPSC Notes | EduRev is a part of the UPSC Course Indian Polity for UPSC CSE.
All you need of UPSC at this link: UPSC

The essentials of this scheme were:(i) Each province and each Indian State or group of States were allotted the total number of seats proportional to their respective population roughly in the ratio of one to a million. The Constituent Assembly thus created had 389 members in all, including 93 representatives of the India States.(ii) The seats in each province were distributed among the three main communities, Muslim, Sikh and General, in proportion to their respective population.(iii) Members of each community in the Provincial Legislative Assembly elected their own representatives by the method of proportional representation with single transferable vote.(iv) The method of selection in the case of representatives of Indian States was to be determined by consultation. 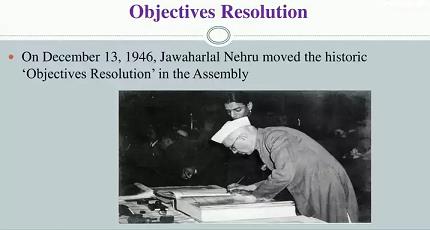 The objectives of the Constituent Assembly were :

(i) India was to be an independent sovereign republic in which both British India and the princely states were to be included.(ii) Each unit was to be given a certain amount of autonomy as well as residuary powers.(iii) All authority and powers of the States were to be derived from the people who were to be guaranteed freedom of economic and political justice, equality of status, and equality before the law. They were to be guaranteed freedom of thought, vocation, association, expression, belief, faith, worship and action subject to law and morality.(iv) The minorities and backward and tribal people were to be provided adequate safeguards. Between December 9, 1946 and August 14, 1947, five sessions of the Constituent Assembly were held. In accordance with Indian Independence Act, of 1947, the Constituent Assembly became a sovereign body. It was no longer to confine itself to the limitations laid down by the Cabinet Mission. On August 29, 1947, the Assembly set up a Drafting Committee to consider the draft constitution. The Committee consisted of eminent constitutionalists like Dr. B.R. Ambedkar (Chairman), Sir Alladi Krishnaswami Ayyar, N. Gopalaswami Ayyangar, Syed Mohammad Saadullah, T.T. Krishnamachari, K.M. Munshi, and Sir B.L. Mittar who was on 5, December 1947 replaced by N. Madhava Rao Dr. Rajendra Prasad was elected President of the Assembly.

Constitution of Ireland: From Ireland, we have adopted the concept of Directive Principles of State Policy. Ireland itself had borrowed the principle from the Republican Constitution of Spain.

Fig: Borrowed features of Indian constitutionAlthough our Constitution-makers borrowed these provisions from many foreign Constitutions, they have tried to make the Indian Constitution a document which is most suitable to the Indian conditions and environment. According to Jawaharlal Nehru, "in any event, whatever system of government we may establish here must fit in with the temper of our people and be acceptable to them."