The document NCERT Exemplar: Cell Cycle & Cell Division Notes | Study Biology Class 11 - NEET is a part of the NEET Course Biology Class 11.
All you need of NEET at this link: NEET

Meiosis in diploid organisms results in the production of gametes, reduction in the number of chromosomes and introduction of variation.

At the anaphase-I stage of meiosis, the genetic constitution of gametes is finally decided.

MitosisMitosis is the most dramatic period of the cell cycle, involving a major reorganisation of virtually all components of the cell. Since the number of chromosomes in the parent and progeny cells is the same, it is also called as equational division.

A bivalent of meiosis-I consists of four chromatids and two centromeres.

Phase G0 is also called quiescent phase and no cell division takes place during this phase.

Q8. Which of the events listed below is not observed during mitosis?(a) Chromatin condensation(b) Movement of centrioles to opposite poles(c) Appearance of chromosomes with two chromatids joined together at the centromere.(d) Crossing overAns: (d)

Q9. Identify the wrong statement about meiosis.(a) Pairing of homologous chromosomes(b) Four haploid cells are formed(c) At the end of meiosis the number of chromosomes is reduced to half(d) Two cycles of DNA replication occur.Ans: (d)

Meiosis involves two sequential cycles of nuclear and cell division called meiosis-I and meiosis-II but only a single cycle of DNA replication.

Q10. Select the correct statement about G1 phase(a) Cell is metabolically inactive(b) DNA in the cell does not replicate(c) It is not a phase of synthesis of macromolecules(d) Cell stops growingAns: (b)

During G1 phase the ceil is metabolically active and continuously grows but does not replicate its DNA but proteins and RNA are synthesized.

Q1. Between a prokaryote and a eukaryote, which cell has a shorter cell division time?Ans: Prokaryotic cells have a shorter cell division time than eukaryotic cells. A typical eukaryotic cell cycle is illustrated by human cells in culture. These cells divide once approximately every 24 hours. In bacteria (E.coli) cell cycle is of 20 minutes.Q2. Which of the phases of the cell cycle is of the longest duration?Ans: Interphase. In a 24-hour cell cycle, 23 hours are for I-phase and 1 hour for M phase.Q3. Name a stain commonly used to colour chromosomes.Ans: Basic fuchsin, acetocarmine etc.Q4. Which tissue of animals and plants exhibits meiosis?Ans: Gonads (testes and ovary) in animals and sporangium in plants.Q5. Given that the average duplication time of E.coli is 20 minutes, how much time will two E.coli cells take to become 32 cells?Ans:

For formation of 32 cells, two E.coli cells takes 4 cycles. So total time will be 4 x 20 = 80 minutesQ6. Which part of the human body should one use to demonstrate stages in mitosis?Ans: Nail base or any somatic cell (diploid cell).Q7. What attributes does a chromatid require to be classified as a chromosome?Ans: CentromereQ8. The diagram shows a bivalent at prophase-I of meiosis. Which of the four chromatids can cross over?

Ans: Sister chromatids of homologous chromosome.Q9. If a tissue has at a given time 1024 cells, how many cycles of mitosis had the original parental single cell undergone?Ans.

Q1. State the role of centrioles other than spindle formation.Ans: The centrioles form the basal body of cilia or flagella.Q2. Mitochondria and plastids have their own DNA (genetic material). What is known about their fate during nuclear division like mitosis?Ans: At the time of cytoplasmic division, organelles like mitochondria and plastids get distributed between the two daughter cells.Q3. Label the diagram and also determine the stage at which this structure is visible.

Ans: This is a transition to metaphase.

Q9. Name the pathological condition when uncontrolled cell division occurs.Ans: This is called malignancy caused due to cancer.

Q10. Two key events take place, during the S phase in animal cells, DNA replication and duplication of the centriole. In which parts of the cell do events occur?Ans: In animal cells, during the S phase, DNA replication begins in the nucleus, and the centriole duplicates in the cytoplasm.Q11. Comment on the statement – Meiosis enables the conservation of specific chromosome number of each species even though the process per se, results in the reduction of chromosome number.Ans: Meiosis is the mechanism by which conservation of specific chromosome number of each species is achieved across generations in sexually reproducing organisms, even though the process, per se, paradoxically, results in reduction of chromosome number by half. But fertilisation restores the chromosome number.Q12. Name a cell that is found arrested in the diplotene stage for months and years. Comment in 2-3 lines how it completes the cell cycle?Ans: In oocytes of some vertebrates, diplotene can last for months or years.

Q13. How does cytokinesis in plant cells differ from that in animal cells?Ans: In an animal cell, cytokinesis is achieved by the appearance of a furrow in the plasma membrane. The furrow gradually deepens and ultimately joins in the centre dividing the cell cytoplasm into two.Plant cells however, are enclosed by a relatively inextensible cell wall, therefore they undergo cytokinesis by a different mechanism. In plant cells, wall formation starts in the centre of the cell and grows outward to meet the existing lateral walls. The formation of the new cell wall begins with the formation of a simple precursor, called the cell plate that represents the middle lamella between the walls of two adjacent cells.

Q1. Comment on the statement – Telophase is reverse of prophaseAns: Prophase is marked by the initiation of condensation of chromosomal material. The chromosomal material becomes untangled during the process of chromatin condensation. At the beginning of the final stage of mitosis, i.e. telophase, the chromosomes that have reached their respective poles decondense and lose their individuality.Cells at the end of prophase, when viewed under the microscope, do not show golgi complexes, endoplasmic reticulum, nucleolus and the nuclear envelope. In the telophase stage nuclear envelope assembles around the chromosome clusters. Nucleolus, golgi complex and ER reform.Q2. What are the various stages of meiotic prophase-I? Enumerate the chromosomal events during each stage?Ans: Meiosis-I:Prophase-I: Prophase of the first meiotic division is typically longer and more complex when compared to the prophase of mitosis. It has been further subdivided into the following five phases based on chromosomal behaviour, i.e. Leptotene, Zygotene, Pachytene, Diplotene and Diakinesis.

Q3. Differentiate between the events of mitosis and meiosisAns: 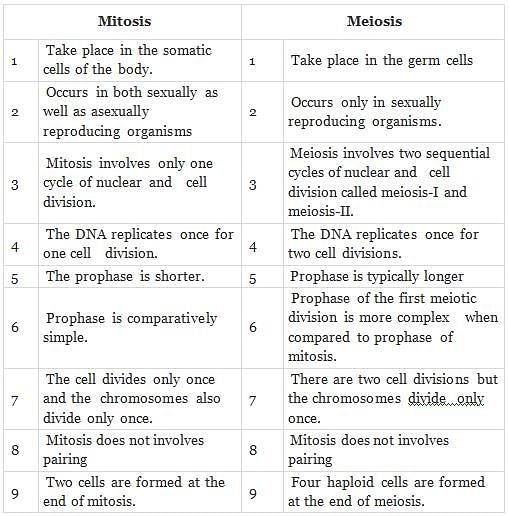 Q4. Write a brief note on the following(a) Synaptonemal complex(b) Metaphase plateAns: (a) Synaptonemal complex: During the zygotene stage chromosomes start pairing together and this process of association is called synapsis. Such paired chromosomes are called homologous chromosomes. Electron micrographs of this stage indicate that chromosome synapsis is accompanied by the formation of a complex structure called synaptonemal complex. The complex formed by a pair of synapsed homologous chromosomes is called a bivalent or a tetrad. However, these are more clearly visible at the next stage.(b) Metaphase plate: At this stage, the metaphase chromosome is made up of two sister chromatids, which are held together by the centromere. Small disc-shaped structures at the surface of the centromeres are called kinetochores. These structures serve as the sites of attachment of spindle fibres (formed by the spindle fibres) to the chromosomes that are moved into position at the centre of the cell. Hence, the metaphase is characterised by all the chromosomes coming to lie at the equator with one chromatid of each chromosome connected by its kinetochore to spindle fibres from one pole and its sister chromatid connected by its kinetochore to spindle fibres from the opposite pole. The plane of alignment of the chromosomes at metaphase is referred to as the metaphase plate.Q5. Write briefly the significance of mitosis and meiosis in a multicellular organism.Ans: Significance of Mitosis:Mitosis or the equational division is usually restricted to the diploid cells only. However, in some lower plants mitosis usually results in the production of diploid daughter cells with identical genetic complement. The growth of multicellular organisms is due to mitosis. A very significant contribution of mitosis is cell repair. The cells of the upper layer of the epidermis, cells of the lining of the gut, and blood cells are being constantly replaced. Mitotic divisions in the meristematic tissues —the apical and the lateral cambium, result in a continuous growth of plants throughout their life.Significance of Meiosis:Meiosis is the mechanism by which conservation of specific chromosome number of each species is achieved across generations in sexually reproducing organisms, even though the process, per se, paradoxically, results in reduction of chromosome number by half. It also increases the genetic variability in the population of organisms from one generation to the next. Variations are very important for the process of evolution. 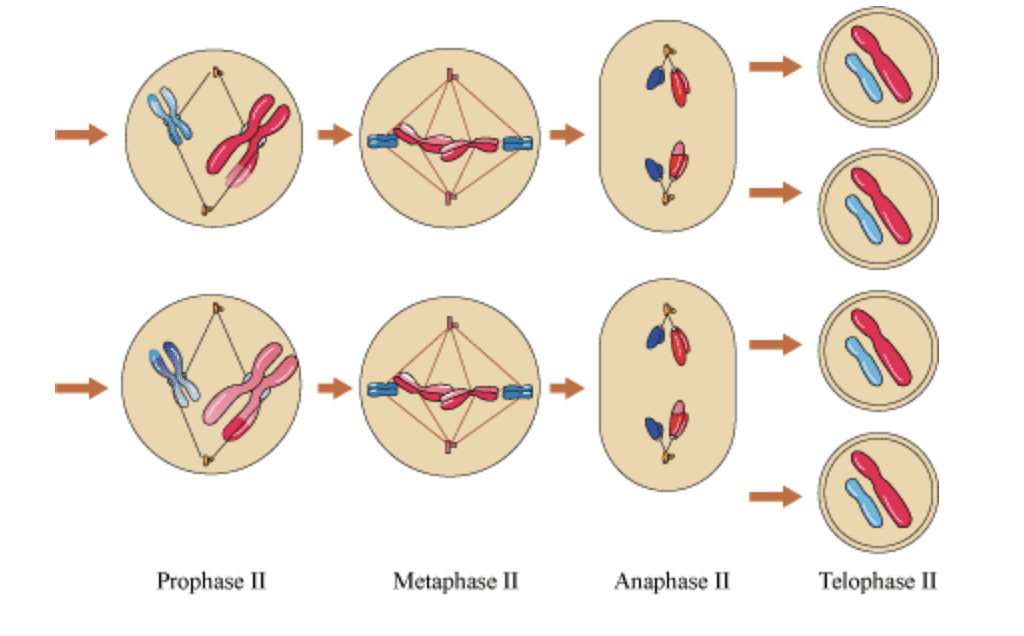 The document NCERT Exemplar: Cell Cycle & Cell Division Notes | Study Biology Class 11 - NEET is a part of the NEET Course Biology Class 11.
All you need of NEET at this link: NEET