The document NCERT Exemplar - Chemical Bonding and Molecular Structure Notes | EduRev is a part of the NEET Course Chemistry Class 11.
All you need of NEET at this link: NEET Q.11. In which of the following substances will hydrogen bond be strongest?(a) HCl(b) H2O(c) HI(d) H2SAns. (b)Solution: HCl, HI, and H2S do not form H-bonds. Only H2O forms hydrogen bonds. One H2O molecule forms four H-bonding. 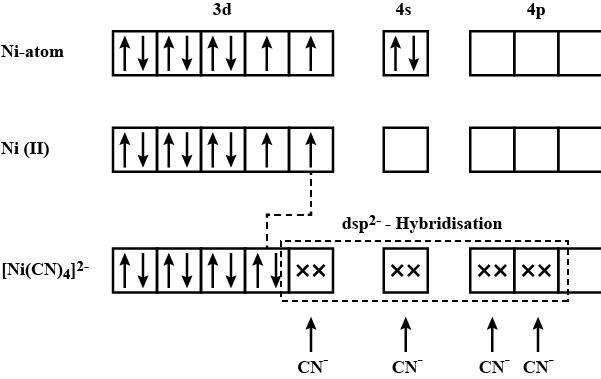 Q.13. Which of the following angle corresponds to sp2 hybridization?(a) 90°(b) 120°(c) 180°(d) 109°Ans. (b)Solution: sp2 hybridization gives three sp2 hybrid orbitals which are planar triangular forming an angle of 120° with each other.Directions: The electronic configurations of three elements A, B, and C are given below.Answer the questions from 14 to 17 on the basis of these configurations.

Q.27. Which of the following statements are correct about CO2–3?(a) The hybridization of the central atom is sp3.(b) Its resonance structure has one C–O single bond and two C=O double bonds.(c) The average formal charge on each oxygen atom is 0.67 units.(d) All C–O bond lengths are equal.Ans. (c, d)Solution:

► The average formal charge on each oxygen atom:

All C - O bonds are equal due to resonance.

Q.30. Which of the following statements are not correct?(a) NaCl being an ionic compound is a good conductor of electricity in the solid-state.(b) In canonical structures, there is a difference in the arrangement of atoms.(c) Hybrid orbitals form stronger bonds than pure orbitals.(d) VSEPR Theory can explain the square planar geometry of XeF4.Ans. (a, b)Solution:

(a) Ionic compounds are good conductors only in molten state or aqueous solution since ions are not furnished in solid-state.(b) In canonical structures, there is a difference in the arrangement of electrons.