The document NCERT Exemplar - Morphology of Flowering Plants Notes | EduRev is a part of the NEET Course Biology Class 11.
All you need of NEET at this link: NEET 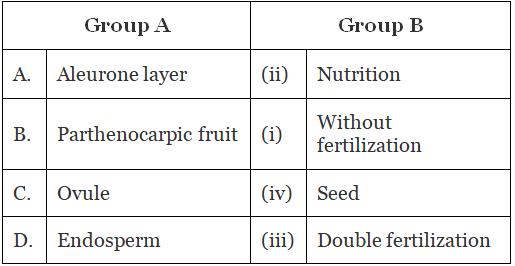 Q.1. Roots obtain oxygen from air in the soil for respiration. In the absence or deficiency of O2, root growth is restricted or completely stopped. How do the plants growing in marshlands or swamps obtain their O2 required for root respiration?Ans. In some plants such as Rhizophora and Sonneratia (mangrove plant) growing in swampy areas near river mouths (saline marshy soil or halophytes), many roots come out of the ground and grow vertically upwards (negatively geotropic: against gravitational force). Such roots, called pneumatophores or breathing roots or respiratory roots, help to get oxygen for respiration.Q.2.Write floral formula for a flower which, is bisexual; actinomorphic; pentamerous sepal, petal, stamens free with ovary, syncarpous, superior, trilocular with axile placentation.Ans.

Q.3. In Opuntia the stem is modified into a flattened green structure to perform the function of leaves (i.e., photosynthesis). Cite two other examples of modifications of plant parts for the purpose of photosynthesis.Ans. Some plants of arid regions modify their stems into flattened (Opuntia), or fleshy cylindrical (Euphorbia) structures. These modified stems of indefinite growth are called phylloclades. They contain chlorophyll and carry out photosynthesis.Q.4. In swampy areas like the Sunderbans in West Bengal, plants bear special kind of roots called __________ .
Ans. PneumatophoresQ.5. In aquatic plants like Pistia and Eichhornia, leaves and roots are found near _____________.Ans. NodeQ.6. Reticulate and parallel venation are characteristic of ________ and ______ respectively.Ans. Dicotyledons and monocotyledonsQ.7. In epigynous flower, ovary is situated below the _______.Ans. Calyx, corolla and androecium.Q.8. Add the missing floral organs of the given floral formula of Fabaceae. Q.4. A typical angiosperm flower consists of four floral parts. Give the names of the floral parts and their arrangements sequentially.Ans. A typical flower has four different kinds of whorls arranged successively on the swollen end of the stalk or pedicel, called thalamus or receptacle. These are calyx, corolla, androecium and gynoecium. The calyx is the outermost whorl of the flower and the members are called sepals. Corolla is the second outermost whorl composed of petals. Androecium is the second innermost whorl composed of stamens. Gynoecium is the innermost whorl which is female reproductive part of the flower and is made up of one or more carpels.

Q.5. Given below are floral formulae of some plants. Draw floral diagrams from these formulae. Q.7. You have heard about several insectivorous plants that feed on insects. Nepenthes or the pitcher plant is one such example, which usually grows in shallow water or in marsh lands. What part of the plant is modified into a ‘pitcher’? How does this modification help the plant for food even though it can photosynthesize like any other green plant?
Ans. In Nepenthes, picher is modified lamina. Insectivorous plants capable of growing in nitrogen or nitrate deficient soil. Pitcher help in providing the nitrogen to the plant. Leaves also photosynthesize their food.

Q.13. Rhizome of ginger is like the roots of other plants that grows underground. Despite this fact ginger is a stem and not a root. Justify.
Ans. Rhizome is a underground stem growing parallel to soil surface. Ginger is a stem which can be differentiated from root as it has nodes and intemodes.

Q.14. Differentiate between.
(a) Bract and Bracteole
(b) Pulvinus and petiole
(c) Pedicel and peduncle
(d) Spike and spadix
(e) Stamen and staminoide
(f) Pollen and pollenium
Ans.
(a) Reduced leaf found at the base of the pedicel is called bract while leaf like structure present between bract and flower is called bracteole.
(b) In some leguminous plants the leaf base may become swollen is called pulvinus. The petiole (mesopodium) connect the leaf base with lamina and help hold the blade to light.
(c) Pedicie is the stalk of flower while peduncle is the stalk of inflorescence.
(d) In spike sessile flowers are attached on elongated peduncle.
Example: Achyranthes.
Spadix is a special type of spike having a fleshy peduncle and a large brightly coloured bract called spathe.
Example: Palm, Colocasia.
(e) Androecium is composed of stamens. Each stamen represents the male reproductive organ. A sterile stamen is called staminode.
(f) Male gametophyte of angiosperms is called pollen or microspore. A group of pollens forms the pollinium (present in Calotropis).

Q.1. Distinguish between families Fabaceae, Solanaceae, Liliaceae on the basis of gynoecium characteristics (with figures). Also write economic importance of any one of the above family.
Ans.
(a) Gynoecium
(i) Fabaceae— Monocarpellary, ovary unilocular, marginal placentation Q.2. Describe various stem modifications associated with food storage, climbing and protection.
Ans. The stem may not always be typically like what they are expected to be. They are modified to perform different functions. Underground stems of potato, ginger, turmeric, zaminkand, Colocasia are modified to store food in them. They also act as organs of perennation to tide over conditions unfavourable for growth. Stem tendrils which develop from axillary buds, are slender and spirally coiled and help plants to climb such as in gourds (cucumber, pumpkins, watermelon) and grapevines. Axillary buds of stems may also get modified into woody, straight and pointed thorns. Thoms are found in many plants such as Citrus, Bougainvillea. They protect plants from browsing animals. Some plants of arid regions modify their stems into flattened {Opuntia), or fleshy cylindrical {Euphorbia) structures. They contain chlorophyll and carry out photosynthesis.

Q.3. Stolon, offset and rhizome are different forms of stem modifications. How can these modified forms of stem be distinguished from each other?
Ans. Underground stems called stolon of some plants spread to new niches and when older parts die new plants are formed.
Of Fest: A lateral branch with short intemodes and each node bearing a rosette of leaves and a tuft of roots is found in aquatic plants like Pistia and Eichhornia.
Rhizome is underground stem growing parallel to soil surface. In ginger, turmeric, Gloriosa and lotus stem is called rhizome which is differentiated from roots in having scale leaves and axillary buds and helps in vegetative propagation.

Q.4. The mode of arrangements of sepals or petals in a floral bud is known as aestivation. Draw the various types of aestivation possible for a typical pentamerous flower.
Ans. The mode of arrangement of sepals or petals in floral bud with respect to the other members of the same whorl is known as aestivation. The main types of aestivation are valvate, twisted, imbricate and vexillary. When sepals or petals in a whorl just touch one another at the margin, without overlapping, as in Calotropis, it is said to be valvate. If one margin of the appendage overlaps that of the next one and so on as in china rose, lady’s finger and cotton, it is called twisted. If the margins of sepals or petals overlap one another but not in any particular direction as in Cassia and gulmohur, the aestivation is called imbricate. In pea, bean and Crotolaria flowers, there are five petals, the largest (standard) overlaps the two lateral petals (wings) which in turn overlap the two smallest anterior petals (keel); this type of aestivation is known as vexillary or papilionaceous (or descending imbricate). Q.5. The arrangements of ovules within the ovary is known as placentation. What does the term placenta refer to? Name and draw various types of placentations in the flower as seen in T.S. or V.S.
Ans. The ovules are female reproductive structures and borne in the ovary of the flower. The number, structure, their position in the ovary varies in different plants. They also differ in mode of attachment with the ovary wall. At the point of attachment there is a cellular ridge or cushion of cells called placenta. The mode of attachment of ovule to the placenta is known as placentation which is of the following types:
(a) Parietal
(b) Marginal
(c) Axile
(d) Free central
(e) Basal.

Q.6. Sunflower is not a flower. Explain.
Ans. Sunflower is actually an inflorescence (capitulum), it is not a flower.
Capitulum (Head): Here the peduncle is flattened which is called receptacle. Inflorescence is surrounded by whorl of bracts collectively called involucre. On receptacle two kinds of florets are present: .
(i) Ray florets: Zygomorphic, unisexual female, corolla ligulate or strap shaped.
(ii) Disc florets: Actinomorphc, bisexual, corolla tubular, present in centre. Ray florets present towards periphery and disc florets present in the centre,
Example: Compositae (Asteraceae) family—Sunflower (Helianthus), Tagetus (Marigold) and Dahlia.

Q.7. How do you distinguish between hypogeal germination and epigeal germination? What is the role of cotyledon (s) and the endosperm in the germination of seeds?
Ans.
(1) Hypogeal Germination: When the epicotyl grows first, only the plumule is pushed out of the soil. While cotyledons and all other parts remain under the soil, the germination is called hypogeal.
Example: Most of the monocots (Maize’ Rice and Coconut) and some of the dicots (Pea, Gram, Broad bean = Vicia faba, Mango).
(2) Epigeal Germination: When hypocotyl grows first, it pushes the cotyledons and other parts of the seed out of the soil. This germination is called epigeal.
Example: Helianthus (sunflower), mustard, cucurbits, castor, Onion, Tamarindus, French bean, Alisma.

Q.8. Seeds of some plants germinate immediately after shedding from the plants while in other plants they require a period of rest before germination. The later phenomena is called as dormancy. Give the reasons for seed dormancy and some methods to break it.
Ans. There are certain seeds which fall to germinate even when external conditions are favourable. Such seeds are understood to be undergoing a period of dormancy which is controlled not by external environment but are under endogenous control or conditions within the seeds itself.
Reasons for seed dormancy:
(i) Impermeable and hard seed coat; presence of chemical inhibitors such as abscisic acid (ABA), phenolic acid; para-ascrobic acid; and immature embryos are some of the reasons which causes seed dormancy.
Methods of breaking seed dormancy:
(ii) Seed dormancy allows the plants to overcome unfavourable climatic conditions. This dormancy however can be overcome through natural means and various other man-made measures. For example, the seed coat barrier in some seeds cane be broken by mechanical abrasions are caused by microbial action, and passage through digestive tract of animals. Weakening of hard seed coat with sharp edge or knives is called scarification. Prechilling treatment to break seed dormancy is called stratification. Effect of inhibitory substances can be removed by subjecting the seeds to chilling conditions or by application of certain chemical like gibberellic acid and nitrates. Seed domancy is also breaked by auxin and cytokinin. Changing the environment conditions, such as light and temperature and other methods to overcome seed dormancy.