Q.1. Consider a light beam incident from air to a glass slab at Brewster’s angle as shown in Fig. 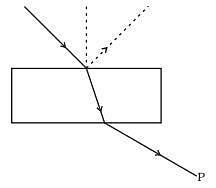 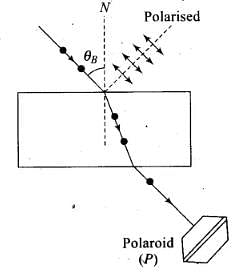 Important points:light: The phenomenon of limiting the vibrating of electric field vector in one direction in a plane perpendicular to the direction of propagation of light wave is called polarization of light.(i) The plane in which oscillation occurs in the polarised light is called plane of oscillation.(ii) The plane perpendicular to the plane of oscillation is called plane of polarisation.(iii) Light can be polarised by transmitting through certain crystals such as tourmaline or polaroids.Polaroids: It is a device used to produce the plane polarised light. It is based on the principle of selective absorption and is more effective than the tourmaline crystal, or it is a thin film of ultramicroscopic crystals of quinine iodosulphate with their optic axis parallel to each other.

(B) Transmission axis of the analyser is perpendicular to the polariser. hence no light passes through the analyserQ.2. Consider sunlight incident on a slit of width 104 Å. The image seen through the slit shall(a) Be a fine sharp slit white in colour at the center.(b) A bright slit white at the center diffusing to zero intensities at the edges.(c) A bright slit white at the center diffusing to regions of different colours.(d) Only be a diffused slit white in colour.Ans. (a)Solution.Width of slit 104 Å = 10,000 Å.Wavelength of visible light varies from 4000 to 8000 Å. As the width of slit 10000 Å is comparable to that of wavelength of visible light i.e. 8000 Å.Hence the diffraction occurs with maxima at the centre. So at the centre all colours appear i.e. white colour at the centre appear.Q.3. Consider a ray of light incident from air onto a slab of glass (refractive index n) of width d, at an angle θ. The phase difference between the ray reflected by the top surface of the glass and the bottom surface is 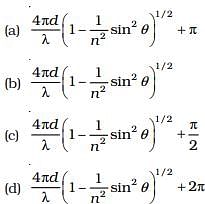 Ans. (a)Solution.Consider a ray of light ABCD through prism, and reflected rays BE and CF from incidence points B and C as shown in figure. 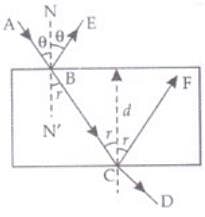 The phase diff. between ray AB and BC after refraction is π∴ Net phase difference = dϕ' + π 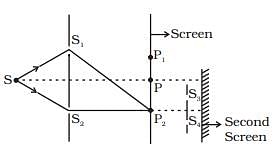 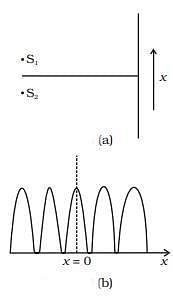 In this case which of the following statements are true.(a) S1 and S2 have the same intensities.(b) S1 and S2 have a constant phase difference.(c) S1 and S2 have the same phase.(d) S1 and S2 have the same wavelength.Ans. (a), (b) and (c)Solution.(i) As the intensity at dark fringe is zero so intensities of S1 and S2 are equal.(ii) As the graph of maxima and minima is symmetric. So the waves from S1 and S2 are at same phase difference or zero phase difference.Q.7. Consider sunlight incident on a pinhole of width 103A. The image of the pinhole seen on a screen shall be(a) A sharp white ring.(b) Different from a geometrical image.(c) A diffused central spot, white in colour.(d) Diffused coloured region around a sharp central white spotAns. (b, d)Solution.The width of pinhole 103 Å = 1000 Å and wavelength of visible light is 4000 Å to 8000 Å i.e., size of slit less than (or comparable) with the wavelength of light.So light from pinhole will diffract from the hole. Due to the diffraction pattern of fringes, the shape are quite different from hole.Q.8. Consider the diffraction pattern for a small pinhole. As the size of the hole is increased(a) The size decreases.(b) The intensity increases.(c) The size increases.(d) The intensity decreases.Ans. (a, b)Solution.We know that width (B0) of central maxima B0 = Dλ/d and width of nth secondary maxima = λ/d here distance (D) between slit and screen, wavelength λ of source does not change.So on increasing width of hole of pinhole, ‘d’ increase. Hence the size of central maxima decreases verifies the option (a).As the energy passing through hole increased on increasing the size of hole. So the intensity of pattern will increase. Hence verifies the option (b).Q.9. For light diverging from a point source(a) The wavefront is spherical.(b) The intensity decreases in proportion to the distance squared.(c) The wavefront is parabolic.(d) The intensity at the wavefront does not depend on the distance.Ans. (a, b)Solution.Light from point source emits in all around the source with same speed so forms a spherical surface of wavefront or spherical wavefront. 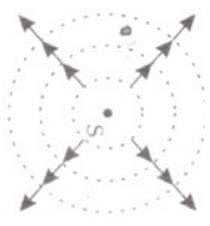 As the intensity (I) always decreases as the reciprocal of square of distance.

r = radius of spherical wavefront at any time (r = vt)

Q.10. Is Huygen’s principle valid for longitudunal sound waves?Ans. Consider a source of sound formed with the compressions and rarefactions forward in all directions with same velocity. So longitudinal waves propagate with spherical symmetry in all directions as the wavefront in light waves. So Huygen’s principle is valid for longitudinal sound waves also. 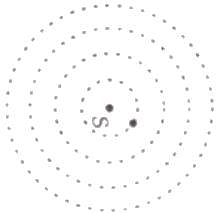 On a surface of sphere there will be either compression or rarefaction and that part can also behave like a source of sound but with low intensity.Q.11. Consider a point at the focal point of a convergent lens. Another convergent lens of short focal length is placed on the other side. What is the nature of the wavefronts emerging from the final image?Ans. Consider a point ‘F’ on focus of converging lens L1. The light rays from F, becomes parallel after refraction through L1. When these parallel rays falls on converging lens L2 placed co-axial on the other side of F of L1. L2 converges the rays at it’s focus at I. It now behave like a point source of rays and form a spherical wave front.

Q.12. What is the shape of the wavefront on earth for sunlight?Ans. As the sun is very-very far from the earth so can be considered at infinity and sun can be considered as a point source which gives spherical wavefront. The size of the earth is very small as compared to distance of sun from earth and size of the sun so the plane wavefront reaches on earth as shown in figure here.

Q.13. Why is the diffraction of sound waves more evident in daily experience than that of light wave?Ans. We know that frequencies of sound waves varies from 20 Hz to 20,000 Hz, so its corresponding wavelength varies from 15m to 15mm respectively. The size of slit (almost) becomes comparable to wavelength of sound so diffraction of sound wave takes place easily.But the wavelength of visible light varies from 0.4 to 0.7 micron which is very small. So the size of most of the slits in not comparable with wavelength of visible light, due to this diffraction of light cannot take place.Q.14. The human eye has an approximate angular resolution of φ = × 5.8 10-4 rad and a typical photo printer prints a minimum of 300 dpi (dots per inch, 1 inch = 2.54 cm). At what minimal distance z should a printed page be held so that one does not see the individual dots.Ans. Angular separation =5.8 × 10-4 radianThe average distance between any two dots

Maximum distance up to which human eye cannot see 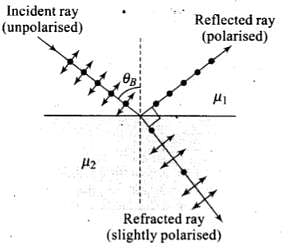 Polarisation by reflection occurs when the angle of incidence is the Brewster’s angle.i.e.,

When the light rays travels in such a medium, the critical angle is

As |tan iB| > |sin iC| for large angles iB < iC.Thus, the polarisation by reflection occurs definitely.Important point: Brewster’s angle (also known as the polarization angle) is an angle of incidence at which light with a particular polarization is perfectly transmitted through a transparent dielectric surface, with no reflection. When unpolarized light is incidents this angle, the light that is reflected from the surface is therefore perfectly polarized. This special angle of incidence is named after the Scottish physicist Sir David Brewster.Q.17. For the same objective, find the ratio of the least separation between two points to be distinguished by a microscope for light of 5000 Å and electrons accelerated through 100V used as the illuminating substance.Ans. λ = 5000 Å = 5000×10-10mIn microscope,

Limit of resolution by light of 5000 Ådmin =

Substitute the value of d and x from I and II

Rationalising the denominator, we get,

Amplitude of the wave in parallel polarisation

∴ Average Intensity on the screen

= Intensity without polariser at principal maxima.Intensity at first minima with polariser

For the first minima the path difference = +λ/2

(For both upper and lower side from O] 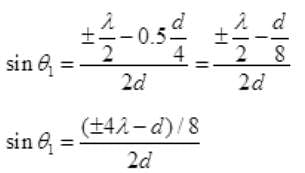 For diffraction, λ=d (half the slit dist.)

For positive direction side, sin

For negative direction side,

The distance of first minima from principal maxima on either side

[above point O on screen]

above O in positive direction.The distance of first minima on the negative side is

Q.21. Four identical monochromatic sources A,B,C,D as shown in the (Fig.) produce waves of the same wavelength λ and are coherent. Two receiver R1 and R2 are at great but equal distaces from B. 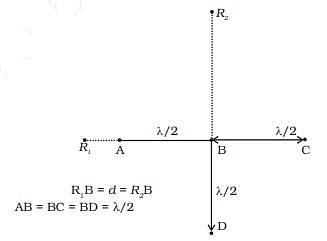 Thus, the signal picked up at R1 is zero.Now let us consider the resultant signal received at R2. Let the equation of wave at R2. because of B be yB = a1 cos ωt   ....(i)The path difference of the signal from D with that from B is λ/2 and hence, the phase difference

∴ Signal picked up by

For ordinary material εr > 0 and µr > 0 and the positive sign is taken for the square root. In 1964, a Russian scientist V. Veselago postulated the existence of material with εr < 0 and µr < 0. Since then such ‘metamaterials’ have been produced in the laboratories and their optical properties studied.(i) According to the description above show that if rays of light enter such a medium from air (refractive index =1) at an angle θ in 2nd quadrant, them the refracted beam is in the 3rd quadrant.(ii) Prove that Snell’s law holds for such a medium.Ans. (i) If given postulate is true, then two parallel rays would proceed as shown in the figure (i). 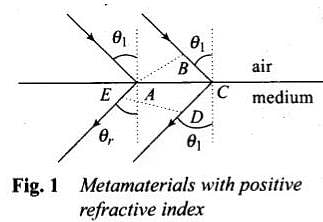 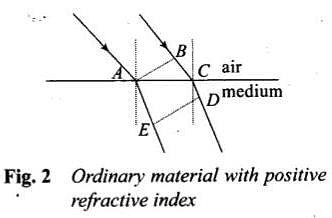 Again consider figure (i), let A B represent the incident wavefront and D E represent the refracted wavefront. All points on a wavefront must be in same phase and in turn, must have the same optical path length.Thus

As showing that the postulate is reasonable. If however, the light proceeded in the sense it does for ordinary material (viz. in the fourth quadrant, Fig. 2)Then

If BC > 0, then CD > AEwhich is obvious from Fig. (i). Hence, the postulate is reasonable.However, if the light proceed in the sense it does for ordinary material, (going from 2nd quadrant to 4th quadrant) as shown in Fig. (i). then proceeding as above,

which proves Snell’s law.Q.23. To ensure almost 100 per cent transmittivity, photographic lenses are often coated with a thin layer of dielectric material. The refractive index of this material is intermediated between that of air and glass (which makes the optical element of the lens).A typically used dielectric film is MgF2 (n = 1.38). What should the thickness of the film be so that at the center of the visible spectrum (5500 Å) there is maximum transmission.Ans. In the given figure incidence ray IA incident at point A from air to film surface with incident angle i. here at A, it gets partial reflection and refraction, passes through paths AR1 and AD respectively. AT D it again gets partial reflection (and refractions) from the glass and film interface surface. At C the interface surface of film and air and finally after refraction from C pass through path CR2 parallel to AR1.The amplitude (intensity) of wave during refraction and reflection decreases.If the interference due to two reflected rays AR1 and CR2 is destructive interference, then the reflected rays AR, and CR2 will not dominant. 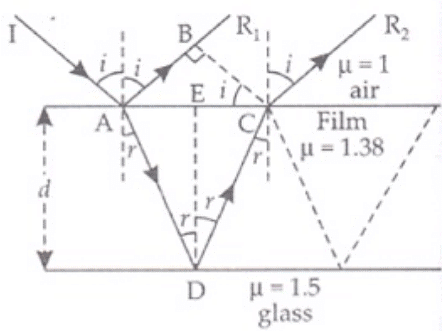 Both reflections are from lower to higher refractive index surfaces So, optical path difference between AR1 and CR2 will beμ(AD + CD) - AB   ...(I)If d is the thickness of film then,