The document NCERT Exemplars - Nuclei (Part - 2) Notes | EduRev is a part of the JEE Course JEE Revision Notes.
All you need of JEE at this link: JEE

Q.16. Why do stable nuclei never have more protons than neutrons?Ans. The reason is that protons, being charged particles, repel each other. This repulsion becomes so great in nuclei with more than 10 protons or so, that an excess of neutrons which produce only attractive forces, is required for stability.Important point: As you get to heavier elements, with each new proton you add, there is a larger repulsive force. The nuclear force is attractive and stronger than the electrostatic force, but it has a finite range. So you need to add extra neutrons, which do not repel each other, to add extra attractive force. You eventually reach a point where the nucleus is just too big, and tends to decay via alpha decay or spontaneous fission.To view this in quantum mechanical terms, the proton potential well is not as deep as the neutron well due to the electrostatic repulsion. [Due to the Pauli exclusion principle, you only get two particles per level (spin up and spin down)]. If one well is filled higher than the other, you tend to get a beta decay to even them out. As the nuclei get larger, the neutron well gels deeper as compared to the proton well and you get more neutrons than protons.

Q.17. Consider a radioactive nucleus A which decays to a stable nucleus C through the following sequence:A → B → CHere B is an intermediate nuclei which is also radioactive.Considering that there are N0 atoms of A initially, plot the graph showing the variation of number of atoms of A and B versus time.Ans. Consider radioactive nucleus A have N0 atoms of A initially; or at t = 0, NA = N0 (maximum) whole NB = 0. As time increases, NA decreases exponentially and the number of atoms of B increases. After some time NB becomes maximum. As B is an intermediate nuclei which is also radioactive, it also start decaying and finally drop to zero exponentially by radioactive decay law. We can represent the situation as shown in the graph. 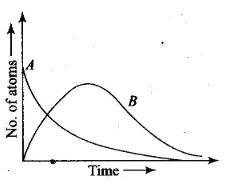 Q.18. A piece of wood from the ruins of an ancient building was found to have a 14C activity of 12 disintegrations per minute per gram of its carbon content. The 14C activity of the living wood is 16 disintegrations per minute per gram. How long ago did the tree, from which the wooden sample came, die? Given half-life of 14C is 5760 years.Ans. Rate of disintegration in old wood sample of C-14 radioactive atoms is 12 atoms per min gm. Initially rate of disintegration of C-14 when the tree was live=16 atoms per min per gm.T1/2 of C-14 nuclei=5760 yearsAccording to radioactive decay law,N=N0e-λt or R=R0e-λt12=16e-λt 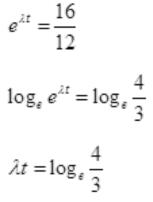 Q.19. Are the nucleons fundamental particles, or do they consist of still smaller parts? One way to find out is to probe a nucleon just as Rutherford probed an atom. What should be the kinetic energy of an electron for it to be able to probe a nucleon? Assume the diameter of a nucleon to be approximately 10–15 m.Ans. To detect the properties of nucleons inside the nucleus the wavelength of particle which may detect nucleons that must be of size of nucleons (10-15 m). So the wavelength of particle which can detect the nucleons must be equal to or less than 10-15λ = 10-15 mλ = h/p∵ E = hv = hc/λ    [∵c = vλ]

Q.21. Sometimes a radioactive nucleus decays into a nucleus which itself is radioactive. An example is: 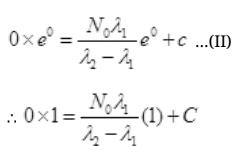 Multiplying E-λ2t to both sides we get By cross multiplication and multiplying both sides by Number Cl38 radioactive atoms will be maximum at N2 = 0.8267 hrs.Q.22. Deuteron is a bound state of a neutron and a proton with a binding energy B = 2.2 MeV. A γ -ray of energy E is aimed at a deuteron nucleus to try to break it into a (neutron + proton) such that the n and p move in the direction of the incident γ-ray.If E = B, show that this cannot happen. Hence calculate how much bigger than B must E be for such a process to happen.Ans. Binding energy (B) of deuteron = 2.2 MeVSome part of energy of γ-ray is used up against binding energy B = 2.2 MeV and the rest part will impart K.E. to neutron and proton. By law of conservation of momentum,∴ Pn + pp= momentum of γ-ray of Energy E

Case I: If E=B then from

It can be possible if pn= pp=0 because square of non zero number can never zero.
If pn=pp=0 then equation IInd cannot be satisfied and the process cannot take place. From II,

but energy E of γ ray cannot be zero.Case II: if E>B or E=B+λ where λ will be very small than B then from (I),

It is a quadratic equation so its solution by quadratic formula

For a real and equal value of Pp discriminant must be zero as the value of pp must be one.

Q.23. The deuteron is bound by nuclear forces just as H-atom is made up of p and e bound by electrostatic forces. If we consider the force between neutron and proton in deuteron as given in the form of a Coulomb potential but with an effective charge e′

Q.24. Before the neutrino hypothesis, the beta decay process was throught to be the transition,

If this was true, show that if the neutron was at rest, the proton and electron would emerge with fixed energies and calculate them.Experimentally, the electron energy was found to have a large range.
Ans.  Neutron was at rest before β decay from neutron. Hence energy of neutron=En=mnc2 and momentum of neutron pn=0 as its velocity is zero.
By the law of conservation of momentum,
Pn=pp+ pe (Beta)
O= pp+ pe
Let pe=pp then
⇒ |pp|=|pe|=p(eV)
Energy of proton = Ep

∴ By the law of conservation of energy, 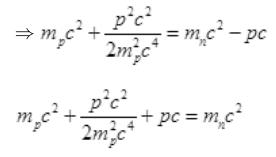 Q.25. The activity R of an unknown radioactive nuclide is measured at hourly intervals. The results found are tabulated as follows:

versus t and obtain the value of half-life from the graph.
Ans.
(i) Graph between R versus t is exponential curve. From the graph at slightly more 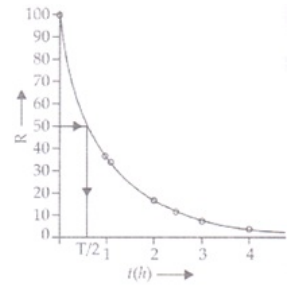 (ii) For Graph between

The graph showing the variation of

versus t(h) as follows:
We know that disintegration constant 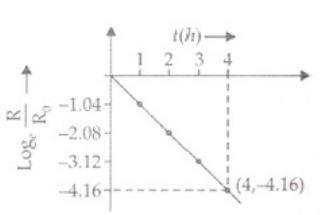