(c) When force is applied on a liquid, the pressure in the liquid is transmitted in all directions. Hence, hydrostatic pressure does not have a fixed direction and it is a scalar physical quantity.Ques 10.2: Explain why(a) The angle of contact of mercury with glass is obtuse, while that of water with glass is acute.(b) Water on a clean glass surface tends to spread out while mercury on the same surface tends to form drops. (Put differently, water wets glass while mercury does not.)(c) Surface tension of a liquid is independent of the area of the surface(d) Water with detergent dissolved in it should have small angles of contact.(e) A drop of liquid under no external forces is always spherical in shapeAns:  (a) The angle between the tangent to the liquid surface at the point of contact and the surface inside the liquid is called the angle of contact (θ), as shown in the given figure.

Sla, Ssa, and Ssl are the respective interfacial tensions between the liquid-air, solid-air, and solid-liquid interfaces. At the line of contact, the surface forces between the three media must be in equilibrium, i.e.,

Area of the heel

= 6.917 × 105 PaPressure is transmitted equally in all directions in a liquid. Therefore, the maximum pressure that the smaller piston would have to bear is 6.917 × 105 Pa.Ques 10.9: A U-tube contains water and methylated spirit separated by mercury. The mercury columns in the two arms are in level with 10.0 cm of water in one arm and 12.5 cm of spirit in the other. What is the specific gravity of spirit?Ans:  The given system of water, mercury, and methylated spirit is shown as follows:

Pressure at points B and D is the same.

It does not matter if one uses gauge pressure instead of absolute pressure while applying Bernoulli’s equation. The two points where Bernoulli’s equation is applied should have significantly different atmospheric pressures.Ques 10.13: Glycerine flows steadily through a horizontal tube of length 1.5 m and radius 1.0 cm. If the amount of glycerine collected per second at one end is 4.0 × 10–3 kg s–1, what is the pressure difference between the two ends of the tube? (Density of glycerine = 1.3 × 103 kg m–3 and viscosity of glycerine = 0.83 Pa s). [You may also like to check if the assumption of laminar flow in the tube is correct].

Volume of glycerine flowing per sec:

According to Poiseville’s formula, we have the relation for the rate of flow:

Where, p is the pressure difference between the two ends of the tube

Reynolds’ number is given by the relation:

According to Bernoulli’s theorem, we have the relation:

P1 = Pressure on the upper surface of the wing

P2 = Pressure on the lower surface of the wing

The pressure difference between the upper & lower surfaces of the wing provides lift to the aeroplane.

Take the case given in figure (b).

From the law of continuity, we have:

When the area of cross-section in the middle of the venturimeter is small, the speed of the flow of liquid through this part is more. According to Bernoulli’s principle, if speed is more,then pressure is less.

Pressure is directly proportional to height. Hence, the level of water in pipe 2 is less.

Therefore, figure (a) is not possible.Ques 10.16: The cylindrical tube of a spray pump has a cross-section of 8.0 cm2 one end of which has 40 fine holes each of diameter 1.0 mm. If the liquid flow inside the tube is 1.5 m min–1, what is the speed of ejection of the liquid through the holes?

Speed of ejection of liquid through the holes = V2

According to the law of continuity, we have:

Therefore, the speed of ejection of the liquid through the holes is 0.633 m/s.Ques 10.17: A U-shaped wire is dipped in a soap solution, and removed. The thin soap film formed between the wire and the light slider supports a weight of 1.5 × 10–2 N (which includes the small weight of the slider). The length of the slider is 30 cm. What is the surface tension of the film?

Total pressure inside the mercury drop

Ans:  Excess pressure inside the soap bubble is 20 Pa;

Pressure inside the air bubble is

Relative density of the soap solution = 1.20

Hence, the excess pressure inside the soap bubble is given by the relation:

Therefore, the excess pressure inside the soap bubble is 20 Pa.

The excess pressure inside the air bubble is given by the relation:

Therefore, the excess pressure inside the air bubble is 10 Pa.

At a depth of 0.4 m, the total pressure inside the air bubble

Therefore, the pressure inside the air bubble is 1.06 x 105 Pa.Ques 10.21: A tank with a square base of area 1.0 m2 is divided by a vertical partition in the middle. The bottom of the partition has a small-hinged door of area 20 cm2. The tank is filled with water in one compartment, and an acid (of relative density 1.7) in the other, both to a height of 4.0 m. compute the force necessary to keep the door close.

Pressure due to water is given as:

Pressure due to acid is given as:

Pressure difference between the water and acid columns:

Hence, the force exerted on the door = ΔP × a

(a) Give the absolute and gauge pressure of the gas in the enclosure for cases (a) and (b), in units of cm of mercury.

(b) How would the levels change in case (b) if 13.6 cm of water (immiscible with mercury) are poured into the right limb of the manometer? (Ignore the small change in the volume of the gas). 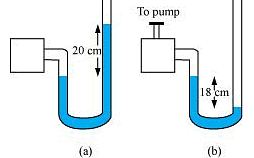 Let h be the difference between the levels of mercury in the two limbs.

The pressure in the right limb is given as:

The mercury column will rise in the left limb.

Hence, pressure in the left limb,

Equating equations (i) and (ii), we get:

Hence, the difference between the levels of mercury in the two limbs will be 19 cm.Ques 10.23: Two vessels have the same base area but different shapes. The first vessel takes twice the volume of water that the second vessel requires to fill upto a particular common height. Is the force exerted by the water on the base of the vessel the same in the two cases? If so, why do the vessels filled with water to that same height give different readings on a weighing scale?

Two vessels having the same base area have identical force and equal pressure acting on their common base area. Since the shapes of the two vessels are different, the force exerted on the sides of the vessels has non-zero vertical components. When these vertical components are added, the total force on one vessel comes out to be greater than that on the other vessel. Hence, when these vessels are filled with water to the same height, they give different readings on a weighing scale.Ques 10.24: During blood transfusion the needle is inserted in a vein where the gauge pressure is 2000 Pa. At what height must the blood container be placed so that blood may just enter the vein? [Use the density of whole blood from Table 10.1].

Height of the blood container = h

The blood may enter the vein if the blood container is kept at a height greater than 0.1925 m, i.e., about 0.2 m.Ques 10.25: In deriving Bernoulli’s equation, we equated the work done on the fluid in the tube to its change in the potential and kinetic energy. (a) What is the largest average velocity of blood flow in an artery of diameter 2 × 10–3 m if the flow must remain laminar? (b) Do the dissipative forces become more important as the fluid velocity increases? Discuss qualitatively.

The largest average velocity of blood is given as:

Therefore, the largest average velocity of blood is 1.966 m/s.

(b) As the fluid velocity increases, the dissipative forces become more important. This is because of the rise of turbulence. Turbulent flow causes dissipative loss in a fluid.Ques 10.26: (a) What is the largest average velocity of blood flow in an artery of radius 2 × 10–3 m if the flow must remain laminar? (b) What is the corresponding flow rate? (Take viscosity of blood to be 2.084 × 10–3 Pa s).

The largest average velocity of blood is given by the relation:

Therefore, the largest average velocity of blood is 0.983 m/s.

(b) Flow rate is given by the relation:

Pressure of air over the lower wing = P1

Pressure of air over the upper wing= P2

The upward force on the plane can be obtained using Bernoulli’s equation as:

The upward force (F) on the plane can be calculated as:

Using Newton’s force equation, we can obtain the mass (m) of the plane as:

can be taken as zero in order to neglect buoyancy of air.

Terminal velocity (v) is given by the relation: 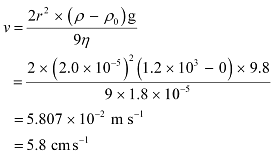 The viscous force on the drop is given by:

Hence, the viscous force on the drop is 3.9 × 10–10 N.Ques 10.29: Mercury has an angle of contact equal to 140° with soda lime glass. A narrow tube of radius 1.00 mm made of this glass is dipped in a trough containing mercury. By what amount does the mercury dip down in the tube relative to the liquid surface outside? Surface tension of mercury at the temperature of the experiment is 0.465 N m–1. Density of mercury = 13.6 × 103 kg m–3.

Dip in the height of mercury = h

Surface tension is related with the angle of contact and the dip in the height as: 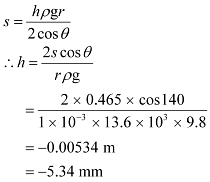 Angle of contact between the bore surface and water, θ= 0

Let h1 and h2 be the heights to which water rises in the first and second tubes respectively. These heights are given by the relations:

The difference between the levels of water in the two limbs of the tube can be calculated as: 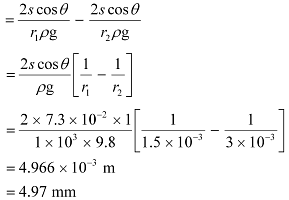 Hence, the difference between levels of water in the two bores is 4.97 mm.Ques 10.31: (a) It is known that density ρ of air decreases with height y as

Where ρ0 = 1.25 kg m–3 is the density at sea level, and y0 is a constant. This density variation is called the law of atmospheres. Obtain this law assuming that the temperature of atmosphere remains a constant (isothermal conditions). Also assume that the value of gremains constant.

(b) A large He balloon of volume 1425 m3 is used to lift a payload of 400 kg. Assume that the balloon maintains constant radius as it rises. How high does it rise?

Density of the balloon = ρ

Height to which the balloon rises = y

Density (ρ) of air decreases with height (y) as:

This density variation is called the law of atmospherics.

It can be inferred from equation (i) that the rate of decrease of density with height is directly proportional to ρ, i.e.,

Where, k is the constant of proportionality

Integrating the sides between these limits, we get:

Comparing equations (i) and (ii), we get: 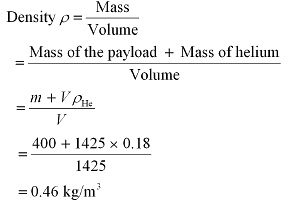 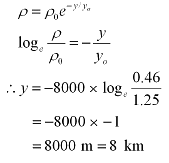 Hence, the balloon will rise to a height of 8 km.