The document NCERT Solutions: Breathing & Exchange of Gases Notes | Study Biology Class 11 - NEET is a part of the NEET Course Biology Class 11.
All you need of NEET at this link: NEET

Ques 1: Define vital capacity. What is its significance? Ans 1: Vital capacity is the maximum volume of air that can be exhaled after a maximum inspiration. It is about 3.5 – 4.5 litres in the human body. It promotes the act of supplying fresh air and getting rid of foul air, thereby increasing the gaseous exchange between the tissues and the environment. 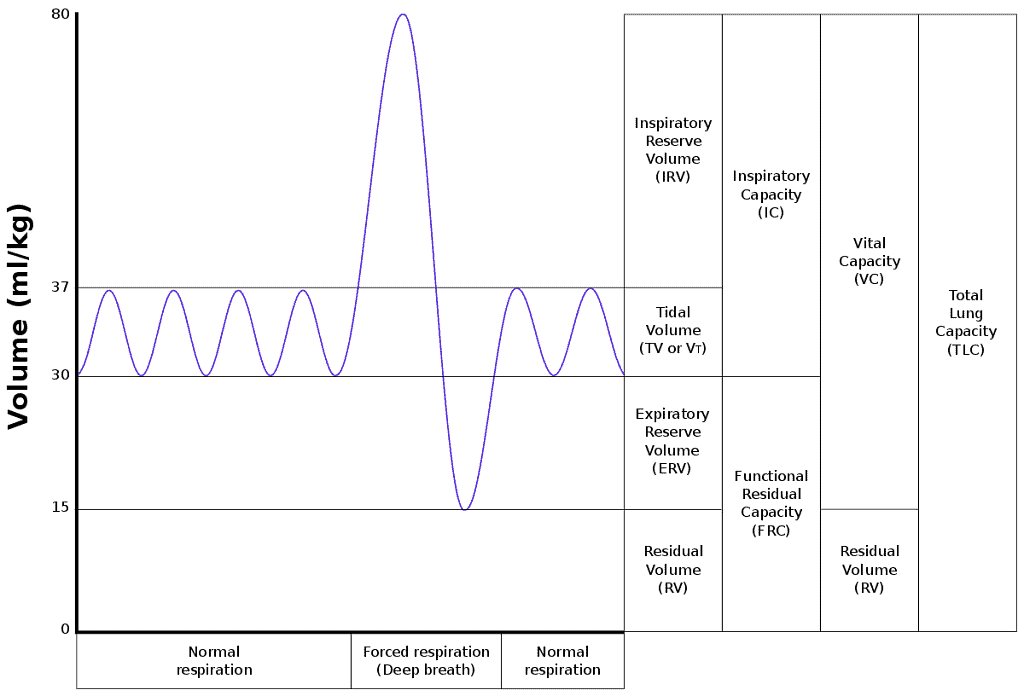 Ques 3: Diffusion of gases occurs in the alveolar region only and not in the other parts of respiratory system. Why? Ans 3: Each alveolus is made up of highly-permeable and thin layers of squamous epithelial cells. Similarly, the blood capillaries have layers of squamous epithelial cells. Oxygen-rich air enters the body through the nose and reaches the alveoli. The deoxygenated (carbon dioxide-rich) blood from the body is brought to the heart by the veins. The heart pumps it to the lungs for oxygenation. The exchange of O2 and CO2 takes place between the blood capillaries surrounding the alveoli and the gases present in the alveoli.

Ques 4:  What are the major transport mechanisms for CO2? Explain.Ans 4: Plasma and red blood cells transport carbon dioxide. This is because they are readily soluble in water. 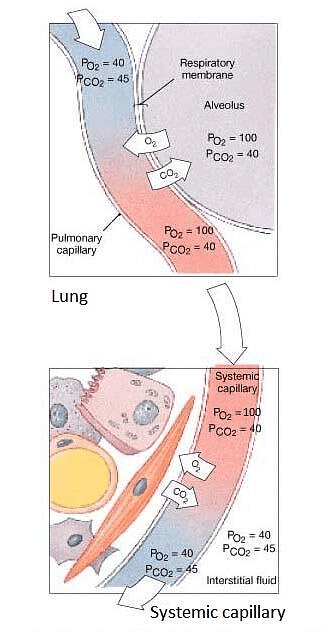 (1) Through plasma:About 7% of CO2 is carried in a dissolved state through plasma. Carbon dioxide combines with water and forms carbonic acid.

Since the process of forming carbonic acid is slow, only a small amount of carbon dioxideis carried this way.

Fig: Transportation of CO2 through RBCs

Ques 6:   Explain the process of inspiration under normal conditions.Ans 6: Inspiration or inhalation is the process of bringing air from outside the body into the lungs. It is carried out by creating a pressure gradient between the lungs and the atmosphere. When air enters the lungs, the diaphragm expands toward the abdominal cavity, thereby increasing the space in the thoracic cavity for accommodating the inhaled air. 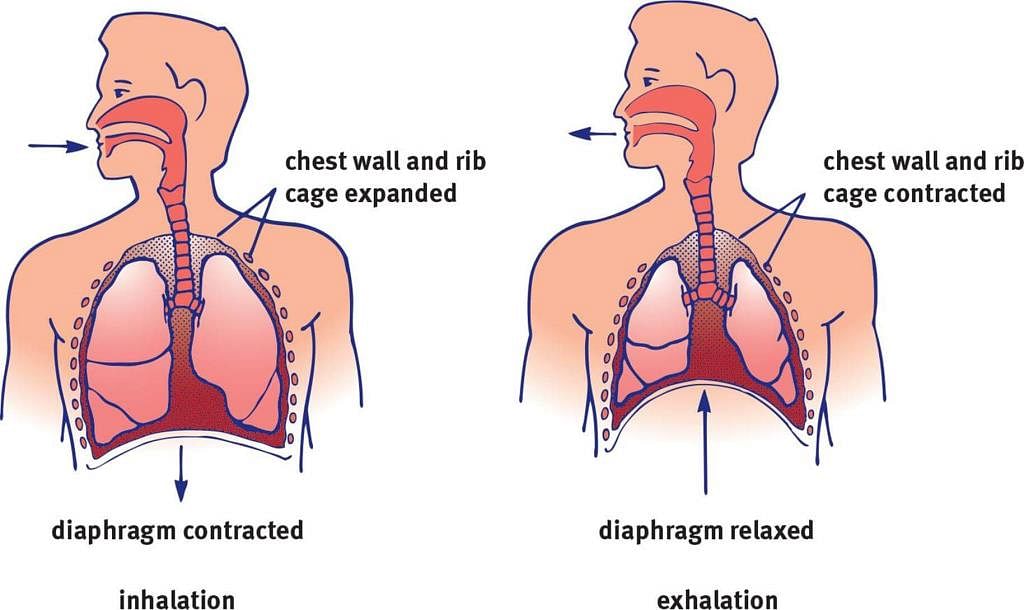 The overall increase in the thoracic volume leads to a similar increase in the pulmonary volume. Now, as a result of this increase, the intra-pulmonary pressure becomes lesser than the atmospheric pressure. This causes the air from outside the body to move into the lungs.

Ques 8: What is the effect of pCO2 on oxygen transport?Ans 8: pCO2 plays an important role in the transportation of oxygen. At the alveolus, the low pCO2 and high pO2 favours the formation of haemoglobin. At the tissues, the high pCO2 and low pO2 favours the dissociation of oxygen from oxyhaemoglobin. Hence, the affinity of haemoglobin for oxygen is enhanced by the decrease of pCO2 in blood. Therefore, oxygen is transported in blood as oxyhaemoglobin and oxygen dissociates from it at the tissues.

Ques 9: What happens to the respiratory process in a man going up a hill?Ans 9: As altitude increases, the oxygen level in the atmosphere decreases. Therefore, as a man goes uphill, he gets less oxygen with each breath. This causes the amount of oxygen in the blood to decline. The respiratory rate increases in response to the decrease in the oxygen content of blood. Simultaneously, the rate of heart beat increases to increase the supply of oxygen to blood.

Ques 10: What is the site of gaseous exchange in an insect?Ans 10: In insects, gaseous exchange occurs through a network of tubes collectively known as the tracheal system. The small openings on the sides of an insect’s body are known as spiracles. Oxygen-rich air enters through the spiracles. The spiracles are connected to the network of tubes. From the spiracles, oxygen enters the tracheae. From here, oxygen diffuses into the cells of the body. 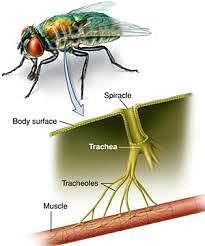 Fig: Gas Exchange in an Insect

The movement of carbon dioxide follows the reverse path. The CO2 from the cells of the body first enters the tracheae and then leaves the body through the spiracles. 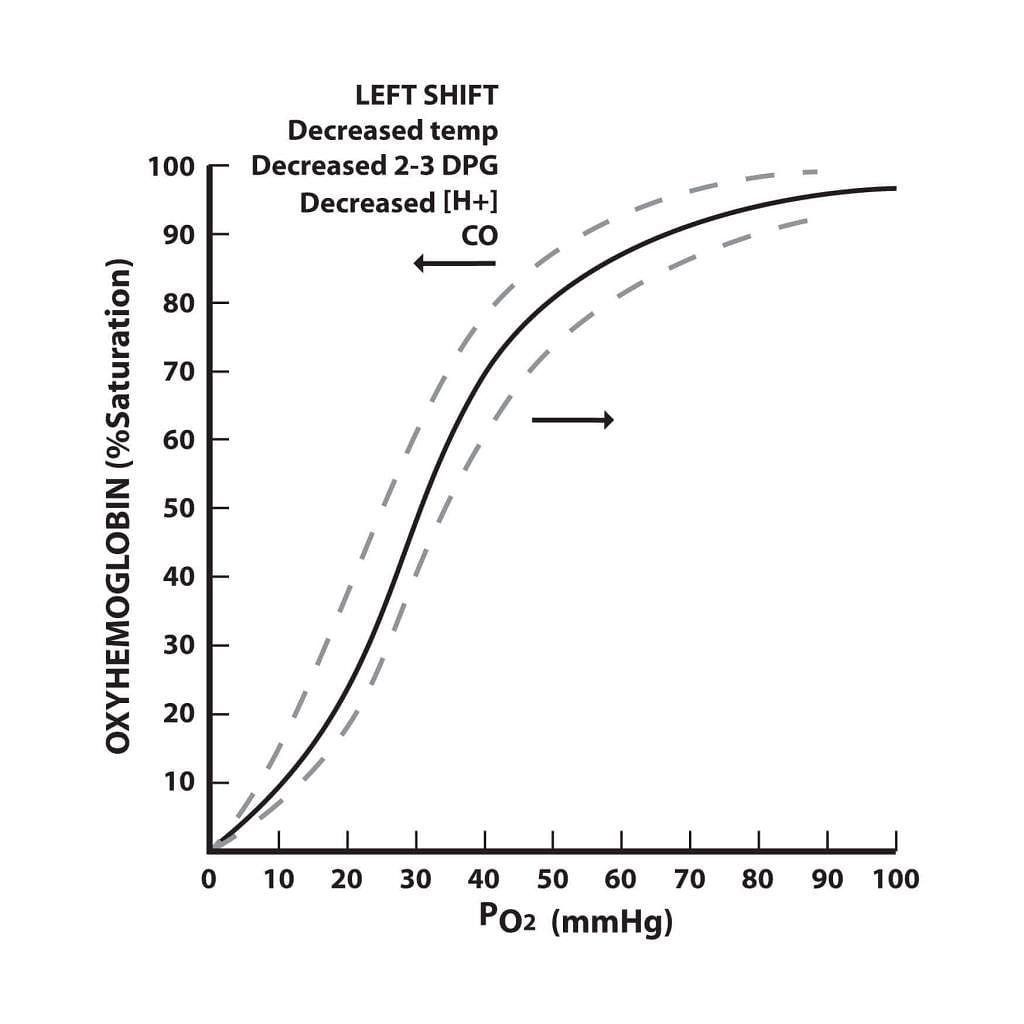 In the lungs, the partial pressure of oxygen is high. Hence, haemoglobin binds to oxygen and forms oxyhaemoglobin.

Tissues have a low oxygen concentration. Therefore, at the tissues, oxyhaemoglobin releases oxygen to form haemoglobin.

Ques 12:  Have you heard about hypoxia? Try to gather information about it, and discuss with your friends. Ans 12: Hypoxia is a condition characterised by an inadequate or decreased supply of oxygen to the lungs. It is caused by several extrinsic factors such as reduction in pO2, inadequate oxygen, etc. The different types of hypoxia are discussed below. 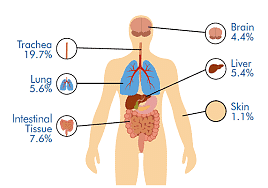 The document NCERT Solutions: Breathing & Exchange of Gases Notes | Study Biology Class 11 - NEET is a part of the NEET Course Biology Class 11.
All you need of NEET at this link: NEET