The document NCERT Solutions: Locomotion & Movement Notes | Study Biology Class 11 - NEET is a part of the NEET Course Biology Class 11.
All you need of NEET at this link: NEET 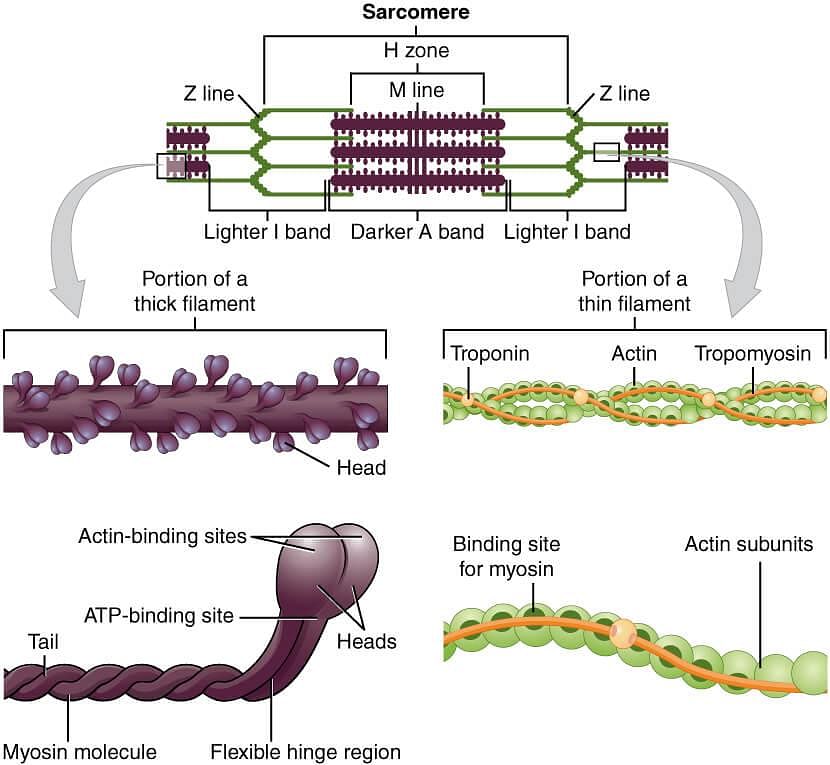 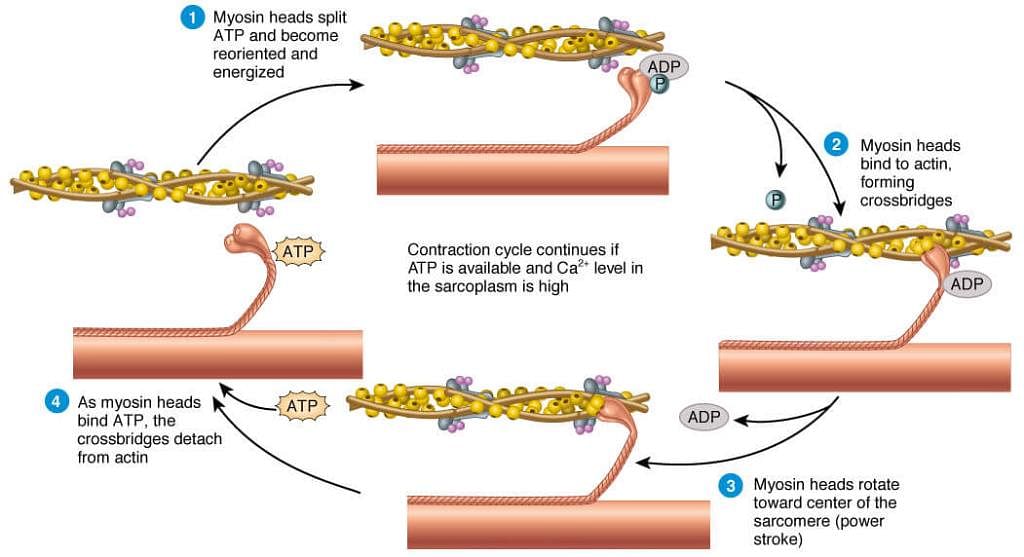 Ans 3: During skeletal muscle contraction, the thick filament slides over the thin filament by a repeated binding and releases myosin along the filament. This whole process occurs in a sequential manner.

Step 1: Muscle contraction is initiated by signals that travel along the axon and reach the neuromuscular junction or motor end plate. Neuromuscular junction is a junction between a neuron and the sarcolemma of the muscle fibre. As a result, Acetylcholine (a neurotransmitter) is released into the synaptic cleft by generating an action potential in sarcolemma.

Step 3: The increased calcium ions in the sarcoplasm leads to the activation of actin sites. Calcium ions bind to the troponin on actin filaments and remove the tropomyosin, wrapped around actin filaments. Hence, active actin sites are exposed and this allows myosin heads to attach to this site.

Step 4: In this stage, the myosin head attaches to the exposed site of actin and forms cross bridges by utilizing energy from ATP hydrolysis. The actin filaments are pulled. As a result, the H-zone reduces. It is at this stage that the contraction of the muscle occurs.

Step 5: After muscle contraction, the myosin head pulls the actin filament and releases ADP along with inorganic phosphate. ATP molecules bind and detach myosin and the cross bridges are broken.

Stage 6: This process of formation and breaking down of cross bridges continues until there is a drop in the stimulus, which causes an increase in calcium. As a result, the concentration of calcium ions decreases, thereby masking the actin filaments and leading to muscle relaxation.

Ques 4: Write true or false. If false change the statement so that it is true.  (a) Actin is present in thin filament  (b)H-zone of striated muscle fibre represents both thick and thin filaments.  (c) Human skeleton has 206 bones.  (d)There are 11 pairs of ribs in man.  (e) Sternum is present on the ventral side of the body. Ans 4:(a) True(b) False(c) True(d) False(e) True

Ques 5: Write the difference between:  (a) Actin and Myosin  (b) Red and White muscles  (c) Pectoral and Pelvic girdleAns 5:

(a) Actin and Myosin

(b) Red and White muscles

Ques 7:What are the different types of movements exhibited by the cells of human body?Ans 7:Movement is a characteristic feature of living organisms. The different types of movement exhibited by cells of the human body are:Amoeboid movement: Leukocytes present in the blood show amoeboid movement. During tissue damage, these blood cells move from the circulatory system towards the injury site to initiate an immune response.

Ciliary movement: Reproductive cells such as sperms and ova show ciliary movement. The passage of ova through the fallopian tube towards the uterus is facilitated by this movement.

Ques 8: How do you distinguish between a skeletal muscle and a cardiac muscle? Ans 8:

Ques 9:   Name the type of joint between the following:  (a) atlas/axis  (b)carpal/metacarpal of thumb  (c) between phalanges  (d)femur/acetabulum  (e) between cranial bones  (f) between pubic bones in the pelvic girdleAns 9:(a) atlas/axis: Pivotal joint(b) carpal/metacarpal of thumb: Saddle joint(c) between phalanges: Hinge joint(d) femur/acetabulum: Ball and socket joint(e) between cranial bones: Fibrous joint(f) between pubic bones in the pelvic girdle: Ball and socket joint

The document NCERT Solutions: Locomotion & Movement Notes | Study Biology Class 11 - NEET is a part of the NEET Course Biology Class 11.
All you need of NEET at this link: NEET