The document NCERT Solutions - Chapter 5: Judiciary, SST, Class 8 | EduRev Notes is a part of the Class 8 Course Social Studies (SST) Class 8.
All you need of Class 8 at this link: Class 8

Q 1. You read that one of the main functions of the judiciary is 'upholding the law and Enforcing Fundamental Rights'. Why do you think an independent judiciary is necessary to carry out this important function?Answer:The independence of the judiciary allows the courts to play a central role in ‘upholding the law and Enforcing Fundamental Rights’ as it ensures that there is no misuse of power by the legislature and the executive. Anyone can approach the courts if they believe that their rights have been violated and Politicians or other socially powerful people cannot use their power to change any judgement.

Q3. In the Following illustration, fill in each tier with the judgments given by the various courts in the Sudha Goel case. Check your responses with others in class. 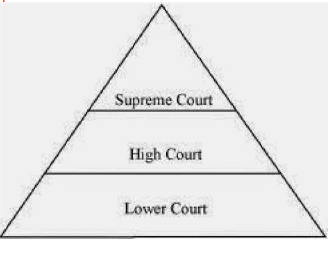