Atmosphere is a mixture of different gases and it envelopes the earth all round. It contains life-giving gases like oxygen for humans and animals and carbon dioxide for plants. The air is an integral part of the earth’s mass and 99 per cent of the total mass of the atmosphere is confined to the height of 32 km from the earth’s surface. The air is colourless and odourless and can be felt only when it blows as wind.

Composition of the AtmosphereThe atmosphere is composed of gases, water vapour and dust particles. Table shows details of various gases in the air, particularly in the lower atmosphere. The proportion of gases changes in the higher layers of the atmosphere in such a way that oxygen will be almost in negligible quantity at the height of 120 kin. Similarly, carbon dioxide and water vapour are found only up to 90 km from the surface of the earth. 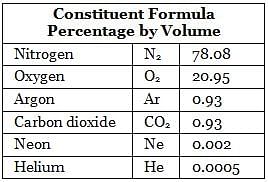 Gases: Carbon dioxide is meteorologically a very important gas as it is transparent to the incoming solar radiation but opaque to the outgoing terrestrial radiation. It absorbs a part of terrestrial radiation and reflects back some part of it towards the earth’s surface. It is largely responsible for the green house effect. The volume of other gases is constant but the volume of carbon dioxide has been rising in the past few decades mainly because of the burning of fossil fuels. This has also increased the temperature of the air. Ozone is another important component of the atmosphere found between 10 and 50 km above the earth’s surface and acts as a filter and absorbs the ultra-violet rays radiating from the sun and prevents them from reaching the surface of the earth.

Water Vapour: Water vapour is also a variable gas in the atmosphere, which decreases with altitude. In the warm and wet tropics, it ‘may account for four percent of the air by volume, while in the dry and cold areas of desert and polar regions, it may be less than one percent of the air. Water vapour also decreases from the equator, towards the poles. It also absorbs parts of the  insolation from the sun and preserves the earth’s radiated heat. It thus, acts like a blanket allowing the earth neither to become ‘too cold nor too hot. Water vapour also contributes to the stability and instability in the air.

Dust Particles: Atmosphere has a sufficient capacity to keep small solid particles, which may originate from different sources and include sea salts, fine soil, smokesoot, ash, pollen, dust and disintegrated particles of meteors. Dust particles are generally concentrated in the lower layers of the atmosphere; yet, convectional air currents may transport them to great heights. The higher concentration of dust particles is found in subtropical and temperate regions due to dry winds in comparison to equatorial and polar regions. Dust and salt particles act as hygroscopic nuclei around which water vapour condenses to produce clouds.

Structure of the AtmosphereThe atmosphere consists of different layers with varying density and temperature. Density is highest near the surface of the earth and decreases with increasing altitude. The column of atmosphere is divided into five different layers depending upon the temperature condition. They are: troposphere, stratosphere, mesosphere, ionosphere and exosphere. The troposphere is the lowermost layer of the atmosphere. Its average height is 13 km and extends roughly to a height of 8 km near the poles and about 18 km at the equator. Thickness of the troposphere is greatest at the equator because heat is transported to great heights by strong convectional currents. This layer contains dust particles and water vapour. All changes in climate and weather take place in this layer. The temperature in this layer decreases at the rate of 1°C for every 165m of height. This is the most important layer for all biological activity.

The mesosphere lies above the stratosphere, which extends up to a height of 80 km. In this layer, once again, temperature starts decreasing with the increase in altitude and reaches up to minus 100°C at the height of 80 km. The upper limit of mesosphere is known as the mesopause. The ionosphere is located between 80 and 400 km above the mesopause. It contains electrically charged particles known as ions, and hence, it is known as ionosphere. Radio waves transmitted from the earth are reflected back to the earth by this layer. Temperature here starts increasing with height. The uppermost layer of the atmosphere above the ‘ionosphere is known as the exosphere. This is the highest layer but very little is known about it. Whatever contents are there, these are extremely rarefied in this layer, and it gradually merges with the outer space. Although all layers of the atmosphere must be exercising influence on us, geographers are concerned with the first two layers of the atmosphere.

Water vapour present in the air is known as humidity. It is express equantitatively in different ways. The actual amount of the water vapour present in the atmosphere is known as the absolute humidity. It is the weight of water vapour per unit volume of air and is expressed in terms of grams per cubic metre. The ability of the air to hold water vapor depends entirely on its temperature. The absolute humidity differs from place to place on the surface of the earth. The percentage of moisture present in the atmosphere as compared to its full capacity at a given temperature is known as the relative humidity. With the change of air temperature, the capacity to retain moisture increases or decreases and the relative humidity is also affected. It is greater over the oceans and least over the continents.The air containing moisture to its full capacity at a given temperature is said to be saturated. It means that the air at the given temperature Is incapable of holding any additional amount of moisture at that stage. The temperature at which saturation occurs in a given sample of air is known as dew point.

Evaporation and CondensationThe amount of water vapour in the atmosphere is added or withdrawn due to evaporation and condensation respectively. Evaporation is a process by which water is transformed from liquid to gaseous state. Heat is the main cause for evaporation. The temperature at which the water starts evaporating is referred to as the latent heat of vapourisation. Increase in temperature increases water absorption and retention capacity of the given parcel of air. Similarly, if the moisture content is low, air has a potentiality of absorbing and retaining moisture. Movement of air replaces the saturated layer with the unsaturated layer. Hence, the greater the movement of air, the greater is the evaporation.

The transformation of water vapour into water is called condensation. Condensation is caused b the loss of heat. When moist air is cooled, it may reach a level when its capacity to hold water vapour ceases. Then, the excess water vapour condenses into liquid form. If it directly condenses into solid form, it is known as sublimation. In free air, condensation results from cooling around very small particles termed as hygroscopic condensation nuclei. Particles of dust, smoke and salt from the ocean are particularly good nuclei because they absorb water. Condensation also takes place when the moist air comes in contact with some colder object and it may also take place when the temperature is close to the dew point. Condensation, therefore, depends upon the amount of cooling and the relative humidity of the air. Condensation is influenced by the volume of air, temperature, pressure and humidity.