The two terms sound similar but there is a clear distinction between them. Human development is based on the idea that education and health are integral to human wellbeing because only when people have the ability to read and write and the ability to lead a long and healthy life, they will be able to make other choices which they value. Human capital treats human beings as a means to an gad end being the increase in productivity. In this view, any investment in education and health is unproductive if it does not enhance output of goods and services. In the human development perspective human beings are ends themselves. Human welfare should be increased through investments in education and health even if such investments do not result in higher labour productivity. Therefore, basic education and basic health are important in themselves, irrespective of their contri-bution to labour productivity. In such a view, every individual has a right to get basic education and basic health care, that is, every individual has a right to be literate and lead a healthy life.HUMAN CAPITAL FORMATION IN INDIA: GREAT PROSPECTSIn this section we are going to analyse human capital formation in India. We have already learnt that human capital formation is the outcome of investments in education, health, on-the-job training, migration and information of these education and health are very important sources of human capital formation. We know that ours is a federal country with a union government, state governments and local governments (Municipal Corporations, Municipalities and Village Panchayats). The Constitution of India mentions the functions to be carried out by each level of government. Accordingly, expenditures on both education and health are to be carried out simultaneously by all the three tiers of the government.

Moreover, individual consumers of these services do not have complete information about the quality of services and their costs. In this situation, the providers of education and health services acquire monopoly power and are involved in exploitation. The role of government in this situation is to ensure that the private provides of these services adhere to the standards stipulated by the government and charge the correct price.

The per capita education expenditure differs considerably across states from as high as Rs. 34440 in Lakshadweep to as low as Rs. 386 in Bihar. This leads to differences in educational opportunities and attainments across states. One can understand the inadequcy of the expenditure on education if we compare it with the desired level of education expenditure as recommended by the various commissions. More than 40 years ago, the Education Commission (1964-66) had recommended that at least 6 percent of GDP be spent on education so as to make a noticeable rate of growth in educational achievements.

In December 2002, the Government of India, through the 86th Amendment of the Constitution of India, made free and compulsory education a fundamental right of all children in the age group of 6-14 years. The Tapas Majumdar Committee, appointed by the Government of India in 1998, estimated an expenditure of around Rs. 1.37 lakh crore over 10 years (1998-99 to 2006-07) to bring all India children in the age group of 6-14 years under the purview of school education. Compare to this desired level of education expenditure of around 6 per cent of GDP, the current level of a little over 4 per cent has been quite inadequate. In principle, a goal of 6 per cent needs to be reached—this has been accepted as a must for the coming years. In the Union Budget 2000-05, the Government of India levied a 2 per cent 'education cess' on all union taxes. The government estimated to get a revenue of rs. 4,000-5,000 crore and the entire amount was earmarked for spending on elementary education. In addition to this, the government sanctioned a large outlay for the promotion of higher education and new loan schemes for students to pursue higher education.

Education Achievements in India: Generally, educational achievements in a country are indicated in terms of adult literacy level, primary education completion rate and youth literacy rate. These statistics for the years 1990 and 2000 are given. 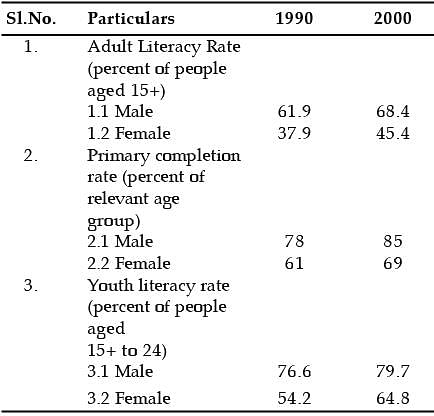