The document NCERT Summary: Legislature- 1 UPSC Notes | EduRev is a part of the UPSC Course Famous Books for UPSC Exam (Summary & Tests).
All you need of UPSC at this link: UPSC
IntroductionLegislation are elected by the people and work on behalf of the people. Here you would study how elected legislature function and help in maintaining the democratic government. You will also learn about the composition and functioning of the parliament and State legislature in India and their importance in democratic government. 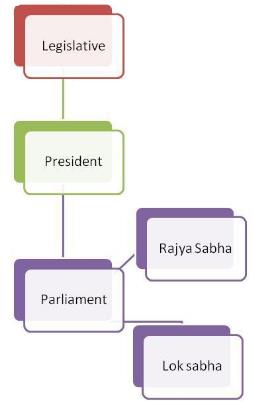 1. Why do we need a Parliament?

2. Why do we need two Houses of Parliament?

Rajya Sabha
Try yourself:Who/what of the following is not a part of the Parliament of India?
Explanation

Parliament is the supreme legislative body of India. The Indian Parliament comprises of the President and the two Houses - Rajya Sabha (Council of States) and Lok Sabha (House of the People). The President has the power to summon and prorogue either House of Parliament or to dissolve Lok Sabha.

View Solution
Lok Sabha
Special Powers of Rajya Sabha
Try yourself:Which of the following is not a function of the Lok sabha?
Explanation

The joint sitting of the Parliament is called by the President (Article 108) and is presided over by the Speaker or, in his absence, by the Deputy Speaker of the Lok Sabha or in his absence, the Deputy-Chairman of the Rajya Sabha. The Chairman doesn't preside over the joint session at any means/cost.