The document NCERT Summary: Our Solar System - 1 Notes | EduRev is a part of the UPSC Course Geography for UPSC CSE.
All you need of UPSC at this link: UPSC

Our Solar system consists of eight planets. The nine planet 2003 UB313 has also been recently sighted. The nebula from which our Solar system is supposed to have been formed, started its collapse and core formation some time 5-5.6 billion ago and the planets formed about 4.6 billion years ago. Our solar system consists of the sun (the star), 8 planets, 63 moons, millions of smaller bodies like asteroids and comets and huge quantity of dust-grains and gases. 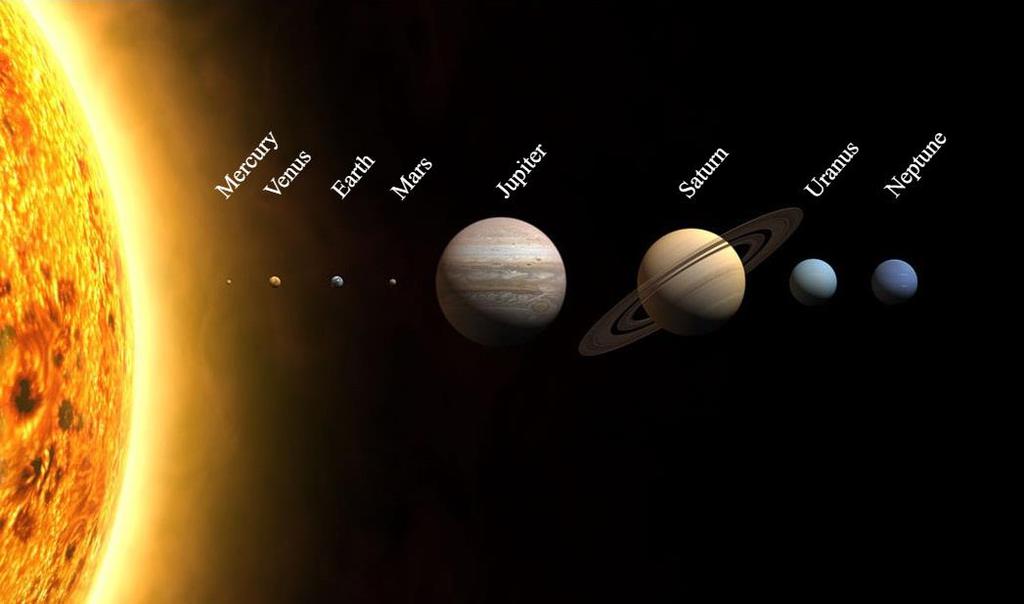 Out of the eight planets, mercury, venus, earth and mars are called as the inner planets as the lie between the sun and the belt of asteroids the other five planets are called the outer planets. Alternatively, the first four are called Terrestrial, meaning earth-like as they are made up of rock and metals, and have relatively high densities. The rest five are called Jovian or Gas Giant planets. Jovian means Jupiter-like. Most of them are much larger than the terrestrial planets and have thick atmosphere, mostly of helium and hydrogen. All the planets were formed in the same period sometime about 4.6 billion years ago. Some data regarding our solar system are given in the box below.

The moon is the only natural satellite of the earth. Like the origin of the earth, there have been attempts to explain how the moon was formed. In 1838, Sir George Darwin suggested that initially, the earth and the moon formed a single rapidly rotating body. The whole mass became a dumb-bell-shaped body and eventually it broke. It was also suggested that the material forming the moon was separated from what we have at present the depression occupied by the Pacific Ocean. 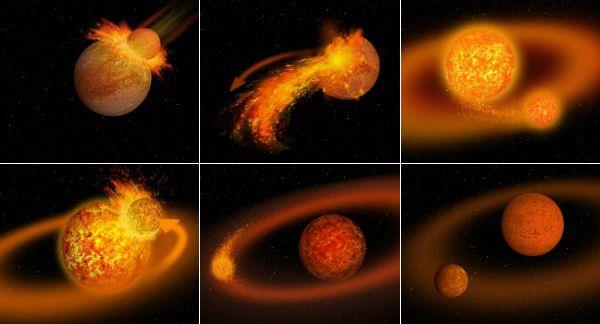 However, the present scientists do not accept either of the explanations. It is now generally believed that the formation of moon, as a satellite of the earth, is an outcome of ‘giant impact’ or what is described as “the big splat”.

A body of the size of one to three times that of mars collided into the earth sometime shortly after the earth was formed. It blasted a large part of the earth into space. This portion of blasted material then continued to orbit the earth and eventually formed into the present moon about 4.44 billion years ago. 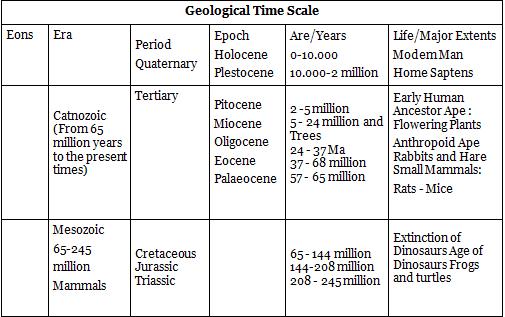 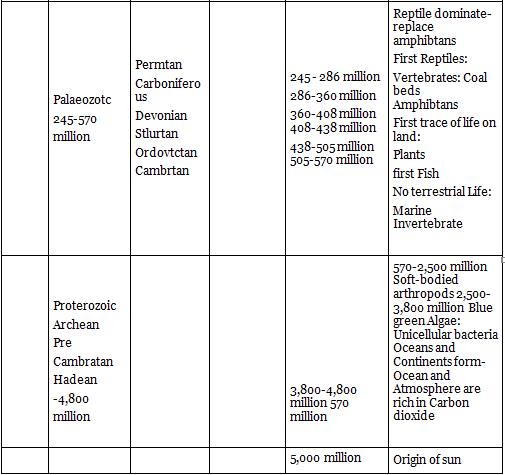 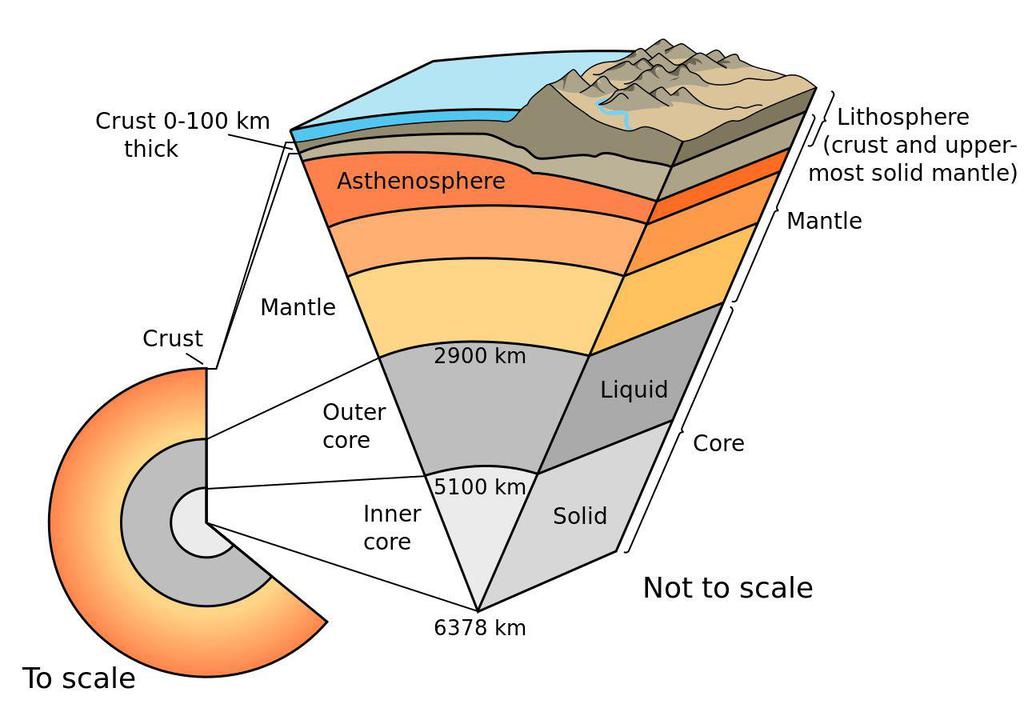 The earth was mostly in a volatile state during its primordial stage. Due to gradual increase in density the temperature inside has increased. As a result the material inside started getting separated depending on their densities. This allowed heavier materials (like iron) to sink towards the centre of the earth and the lighter ones to move towards the surface. With passage of time it cooled further and solidified and condensed into a smaller size. This later led to the development of the outer surface in the form of a crust. During the formation of the moon, due to the giant impact, the earth was further heated up. It is through the process of differentiation that the earth forming material got separated into  different layers. Starting from the surface to the central parts, we have layers like the crust, mantle, outer core and inner core. From the crust to the core, the density of the material increases.

The earth is composed of various kinds of elements. These elements are in solid form in the outer layer of the earth and in hot and molten form in the interior. About 98 per cent of the total crust of the earth is composed of eight elements like oxygen, silicon, aluminum, iron, calcium, sodium, potassium and magnesium, and the rest is constituted by titanium hydrogen, phosphorus, manganese, sulphur, carbon, nickel and other elements.

These substances are recognized as minerals. Thus, a mineral is a naturally occurring inorganic substance, having an orderly atomic structure and a definite chemical composition and physical properties. A mineral is composed of two or more elements. But, sometimes single element minerals like sulphur, copper, silver, gold, graphite etc. are found.

The elements in the earth’s crust are rarely found exclusively but are usually combined with other elements to make various substances.

Though the number of elements making up the lithosphere are limited they are combined in many different ways to make up many varieties of minerals. There are at least 2,000 minerals that have been named and identified in the earth crust; but almost all the commonly occurring ones are related to six major mineral groups that are known as major rock forming minerals.

The basic source of all minerals is the hot magma in the interior of the earth. When magma cools, crystals of minerals appear and a systematic series of minerals are formed in sequence to solidify so as to form rocks.

Minerals such as coal, petroleum and natural gas are organic substances found in solid, liquid and gaseous forms respectively.

Besides these main minerals, other minerals like chlorite, calcite, magnetic, haematite, bauxite and barite are also present in some quantities in the rocks.

The Major Elements of the Earth’s Crust 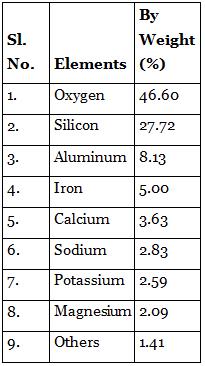 Metallic MineralsThese minerals contain metal content and can be sub-divided into three types:

RocksThe earth’s crust is composed for rocks. A rock is an aggregate of one or more minerals. Rock may be hard or soft and in varied colours. For example, granite is hard, soapstone is soft. Gabbro is black and quartzite can be milky white. Rocks do not have definite composition of mineral constituents. Feldspar and quartz are the most common minerals found in rocks. 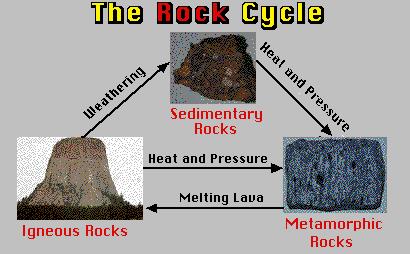 As there is a close relation between rocks and landforms, rocks and soils, a geographer requires basic knowledge of rocks. There are many different kinds of rocks which are grouped under three families on the basis of their mode of formation. They are:

(i) Igneous Rocks- solidified from magma and lava;(ii) Sedimentary Rocks- the result of deposition of fragments of rocks by exogenous processes;(iii) Metamorphic Rocks- formed out of existing rocks undergoing recrystallisation. 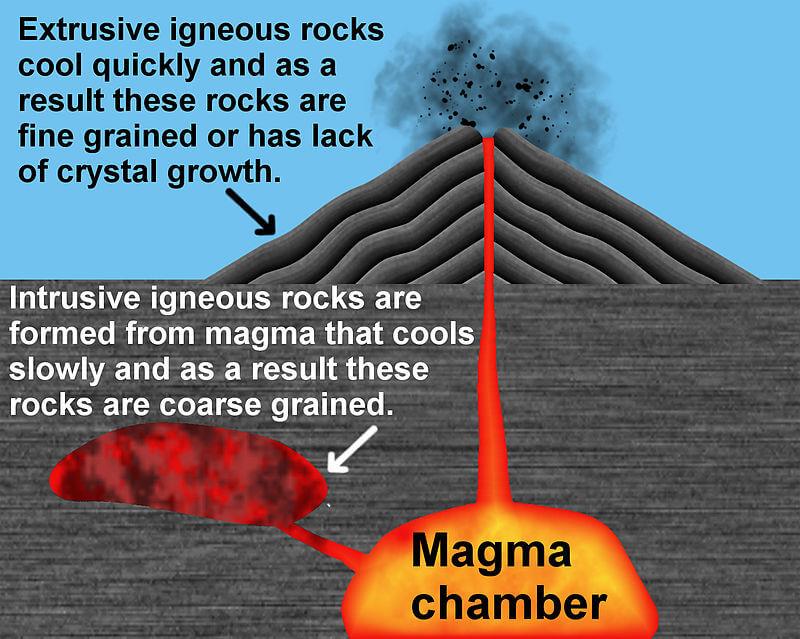 As igneous rocks form out of magma and lava from the interior of the earth, they are known as primary rocks. The igneous rocks (Ignis- in Latin means ‘Fire’) are formed when magma cools and solidifies. You already know that magma is. When magma in its upward movement cools and turns into solid form it is igneous rock. The process of cooling and solidification can happen in the earth’s crust or on the surface of the earth.

Igneous rocks are classified based on texture. Texture depends upon size and arrangement of grains or other physical conditions of the materials. If molten material is cooled slowly at great depths, mineral grains may be very large. Sudden cooling (at the surface) results in small and smooth grains. Intermediate conditions of cooling would result in intermediate sizes of grains making up igneous rocks. Granite, gabbro, pegmatite, basalt, volcanic breccias and tuff are some of the examples of igneous rocks.

Sedimentary RocksThe word ‘sedimentary’ is derived from the Latin word sedimentum, which means settling. Rocks (igneous, sedimentary and metamorphic) of the earth’s surface are exposed to denudational agents, and are broken up into various sizes of fragments. Such fragments are transported by different exogenous agencies and deposited. These deposits through compaction turn into rocks. This process is called lithification. In many sedimentary rocks, the layers of deposits retain their characteristics even after lithification. Hence, we see a number of layers of varying thickness in sedimentary rocks like sandstone, shale etc.

Depending upon the mode of formation, sedimentary rocks are into three major groups:

Metamorphic RocksThe word metamorphic means ‘change of form’. These rocks form under the action of pressure, volume and temperature (PVT) changes. Metamorphism occurs when rocks are forced down to lower levels by tectonic processes or when molten magma rising through the crust comes in contact with the crustal rocks or the underlying rocks are subjected to great amounts of pressure by overlying rocks. Metamorphism is a process by which already consolidated rocks undergo recrystallisation and reorganization of materials within original rocks.

INTERIOR OF THE EARTH 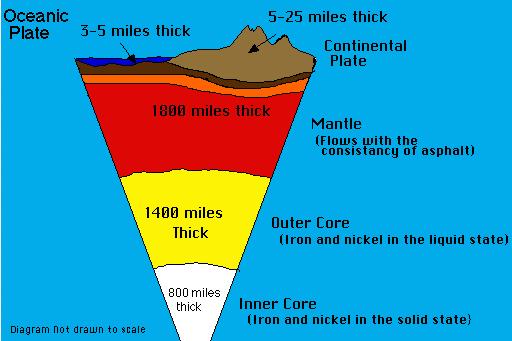 The earth’s radius is 6,370 km. No one can reach the center of the earth and make observations or collect samples of material. Under such conditions, you may wonder how scientists tell us about the earth’s interior and the type of materials that exist at such depths. Most of our knowledge about the interior of the earth is largely based on estimates and inferences. Yet, a part of the information is obtained through direct observations and analysis of materials.

Direct SourcesThe most easily available solid earth material is surface rock or the rocks we get from mining areas. Gold mines in South Africa are as deep as 3-4 km. Going beyond this depth is not possible as it is very hot at this depth. Besides mining, scientists have taken up a number of projects to penetrate deeper depths to explore the conditions in the crustal portions. Scientists world over are working on two major projects such as “Deep Ocean Drilling Project” and “integrated Ocean Drilling Project”. The deepest drill at Kola, in Arctic Ocean, has so far reached a depth of 12 km. This and many deep drilling projects have provided large volume of information through the analysis of materials collected at different depths.

Volcanic eruption forms another source of obtaining direct information. As and when the molten material (magma) is thrown onto the surface of the earth, during volcanic eruption it becomes available for laboratory analysis. However, it is difficult to ascertain the depth of the source of such magma.

Analysis of properties of matter indirectly provides information about the interior. We know through the mining activity that temperature and pressure increase with the increasing distance from the surface towards the interior in deeper depths. Another source of information are the meteors that at time reach the earth. The other indirect sources include gravitation, magnetic field, and seismic activity.