The document NEET Previous Year Questions (2014-20): Current Electricity Class 12 Notes | EduRev is a part of the Class 12 Course Physics Class 12.
All you need of Class 12 at this link: Class 12 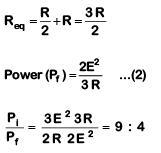 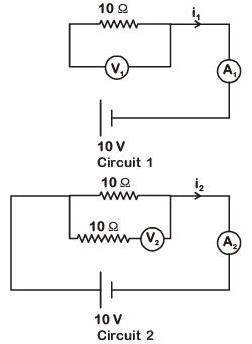 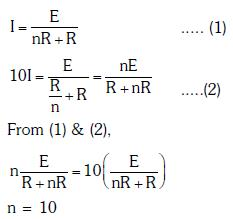 Q.8. A battery consists of a variable number 'n' of identical cells (having internal resistance 'r' each) which are connected in series. The terminals of the battery are short-circuited and the current I is measured. Which of the graphs shows the correct relationship between I and n ?   (2018)A:

Q.11. A potentiometer  is an accurate and versatile device to make electrical measurements of E.M.F. because the method involves :-     (2017)A: Potential gradientsB: A condition of no current flow through the galvanometerC: A combination of cells, galvanometer and resistancesD: CellsAns: BSolution:In zero deflection condition, potentiometer draws no current.Q.12. A potentiometer wire is 100 cm long and a constant potential difference is maintained across it. Two cells are connected in series first to support one another and then in opposite direction. The balance points are obtained at 50 cm and 10 cm from the positive end of the wire in the two cases. The ratio of emf's is :      (2016)A: 3:2B: 5:1C: 5:4D: 3:4Ans: ASolution: According to question, emf of the cell is directly proportional to the balancing length.i.e., E∝ ℓ    ... (i)Now, in the first case, cells are connected in seriesThat is,Net EMF = E1 + E2From equation (i),E1 + E2 = 50 cm (given)  ... (ii)Now, the cells are connected in series in the opposite direction,Net emf = E1 - E2From equation (i)E1 - E2 = 10       ... (iii)From equation (ii) and (iii), For maximum value of t, the current is given by,a-2bt = 0 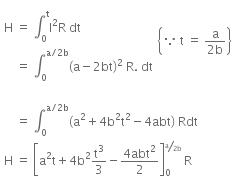 Q.14. A, B and C are voltmeters of resistance R, 1.5 R and 3R respectively as shown in the figure. When some potential difference is applied between X and Y, the voltmeter readings are VA, VB and VC respectively.     (2015)Then :

Figure alongside shows a potentiometer wire of length L = 4m and resistance RAB = 8Ω. Resistance connected in series is R.When an accumulator of emf ε = 2V is used, we have current I given by,

Q.16. Across a metallic conductor of non-uniform cross section a constant potential difference is applied. The quantity which remains constant along the conductor is :  (2015)A: electric filedB: current densityC: currentD: drift velocityAns: CSolution: As the cross-sectional area of the conductor is non-uniform so current density will be different.As, I = JAIt is clear from Eq. (i) when an area increases the current density decreases so the number of the flow of electrons will be same and thus the current will be constant.Q.17. In an ammeter 0.2% of main current passes through the galvanometer. If resistance of galvanometer is G, the resistance of ammeter will be:     (2014)A: 1/500 GB: 500/499 GC: 1/499 GD: 499/500 GAns: ASolution:Let the shunt resistance be S. 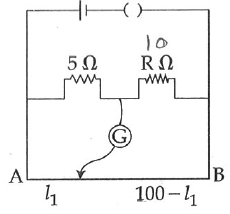 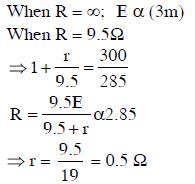