The document Optical Instruments and Scattering of Light Class 12 Notes | EduRev is a part of the Class 12 Course Physics Class 12.
All you need of Class 12 at this link: Class 12

Human eye is an optical instrument which forms real image of the objects on retina.

Retina colours contains lakhs of cone and rod cells which of light and intensities of light respectively. 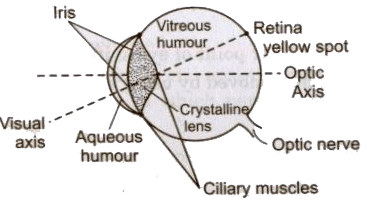 Ciliary muscles change the focal length of eye lens. This power of eye is called power of accommodation of eye.

Different defects of vision of human eye are described below

In this defect, the far point of eye shifts from infinity to a nearer distance.

This defect can be removed by using a concave lens of appropriate power.

In this defect the near point of eye shifts away from the eye.

This defect can be removed by using a convex lens of appropriate power.

(iii) Astigmatism- In this defect, a person cannot focus on horizontal and vertical lines at the same distance at the same time.

This defect can be removed by using suitable cylindrical lenses.

(iv) Colour Blindness In this defect, distinguish between few colours. a person is unable to The reason of this defect is the absence few colours. of cone cells sensitive for

This defect cannot be removed.

(v) Cataract In this defect. an opaque white membrane is developed on cornea due to which person lost power of vision partially on completely.

This defect can be removed by removing this membrane through surgery.

A photograph camera consists of a light proof box, at one end of which a converging lens system is fitted. A light sensitive film is fixed at the other end of the box, opposite to the lens system. A real inverted image of the object is formed on the film by the lens system.

f-Number for a Camera: The f-number represent the size of the aperture.

The amount of light (L) entering the camera is directly proportional to the area (A) of the aperture, i.e.,

Exposure time is the time for which light is incident of photographic film.

It is used for observing magnified images of objects. It is consists of a converging lens of small focal length. 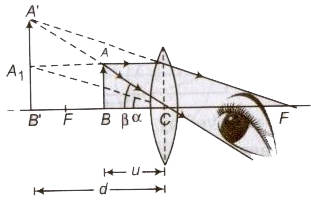 (i) When final image is formed at least distance of distinct vision (D), then M=1+d/f

where, f= focal length of the lens.

(ii) When final image is formed at infinity, then M = D/f It is also a combination of two lenses, called objective lens and eye piece, separated by a distance. It is used for observing distinct images of heavenly bodies like stars, planets etc. (i) When final image is formed at least distance of distinct vision (D), then M = fo/fe {1+ (D/fe)} where fo and fe are focal lengths of objective and eyepiece respectively.

where, ue = distance of object from the eyepiece.

(ii) When final image is formed at infinity, then M = fo/fe

For large magnifying power of a telescope fo should be large and fe should be small.

For large magnifying power of a microscope; fo < fe should be small.

The ability of an optical instrument to produce separate and clear images of two near by objects, is called its resolving power.

The minimum distance between two near by objects which can be just resolved by the instrument, is called its limit of resolution (d).

where, d = limit of resolution, λ = wavelength of light used.μ = refractive index of the medium between the objects and objective lens and θ = half of the cone angle.

where, dθ = limit of resolution, A = wavelength of light used andd = diameter of aperture of objective

The image formed by the lens suffer from following two main drawbacks:-

(i) Spherical Aberration-Aberration of the lens due to which the rays passes through the lens are not focussed at a single and the image of a point object placed on the axis is blurred. called spherical aberration.

It can be reduced by using

(ii) Chromatic Aberration Image of a white object formed by lens is usually coloured and blurred. This defect of the image produced by lens is called chromatic aberration.

When light passes through a medium in which particles are suspended whose size is of the order of wavelength of light, then light on striking these particles, deviated in different directions. These phenomena is called scattering of light.

According to the Lord Rayleigh, the intensity of scattered light