Output is a processed data that is otherwise called information. Output Devices or Output Units do not compute or process anything. Those devices just display the results in hard copy or soft copy.

The commonly used Output Devices are,

A monitor is an electronic visual display for computers. The display device in modern monitors is typically a thin film transistor liquid crystal display (TFT-LCD) thin panel, while older monitors used a cathode ray tube (CRT) about as deep as the screen size. The Organic light-emitting diode (OLED) monitors provide higher contrast and better viewing angles than LCDs but they require more power when displaying documents with white or bright backgrounds.

It is a device used to project an image on the flat surface like computer screen. It is mainly used in presentations, seminars, and meetings. They are also used in schools. Home theater enthusiasts also use them as a good projector will display an image that looks better and more accurately represents the source material than most TVs on the market ever would.

Printer is a device that is capable of printing the processed data from the computer. It can print document or an image.

Dot-matrix printers are now almost extinct. They used a ribbon and made a lot of noise.

Laser printers transfer tiny particles of toner onto the paper. 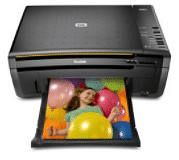 Speaker is a hardware device that is connected to a computer’s sound card. The sound card outputs the sound generated by the computer.

The video card is an expansion card that allows the computer to send graphical information to a video display device such as a monitor, TV, or projector. It is also known as Graphics Card, Video Board, or Video Controller or Video adapter.

Plotter is a device that draws pictures on paper based on commands from a computer. Plotters differ from printers in that they draw lines using a pen. Multi-color plotters use different-colored pens to draw different colors. Plotters are considerably more expensive than printers. They are used in engineering applications where precision is mandatory. 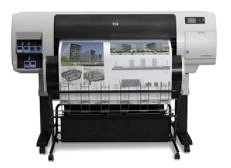