The document Overview of Magnetic Effects of Electric Current Class 10 Notes | EduRev is a part of the Class 10 Course Science Class 10.
All you need of Class 10 at this link: Class 10

2. Two poles of a magnet cannot be separated and magnetic poles are always found in pair.

6. Oersted experimentally proved that magnetic field is produced around a conductor when an electric current is passed through it.The magnitude of the magnetic field produced at a given point near a current-carrying straight conductor is directly proportional to the current passing in the conductor. Moreover, magnetic field decreases as the distance of the point from the conducting wire increases.

11. A strong magnetic field produced by passing a current through a solenoid coil is used to magnetise a piece of iron or any other magnetic material when the piece is placed within the solenoid coil. This type of magnet is known as an electromagnet. 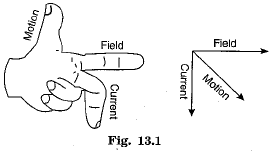 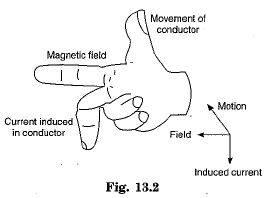 14. Electric motor is a device that converts electrical energy into mechanical energy.
An electric motor works on the principle that a coil carrying current, when placed in a uniform magnetic field, experiences a force whose direction is given by Fleming’s left- hand rule. Electric motors are used in electric fans, refrigerators, mixers, washing machines, computers and practically all machines operating on electrical power.

15. Faraday demonstrated that motion of a magnet with respect to a coil can induce a potential difference between the ends of coil which, in turn, sets up an induced electric current in the coil. In general, an induced current is set up in a closed coil whenever magnetic field near it is changing. It is known as the phenomenon of “electromagnetic induction”. Direction of induced current is given by Fleming’s right-hand rule.

17. A galvanometer is an instrument which can detect the presence of current in a circuit.

20. Electric current, whose magnitude as well as direction remains throughout constant (or same), is called a direct current (D.C.). Current supplied by a battery is a direct current.

22. In domestic electric circuits, all points are connected in parallel so that (a) voltage across each appliance is same, (b) separate switch can be put in the circuit of each appliance and (c) short-circuiting of one appliance does not affect the working of other appliances.

23. The domestic supply circuit consists of three types of wires, namely, (i) live wire having red insulation, (ii) neutral wire having black insulation, and (iii) earth wire having green coloured insulation. Switches are provided in live wire before the appliance. Generally, two separate circuits are used in domestic supply, one of 15 A for appliances of high power rating, e.g., electric stove, geyser, cooler, air conditioner, fridge etc., and the other of 5 A ratings for bulbs, tubes and fans.The watt-hour meter (or electricity meter) measures the total amount of electrical energy consumed in a house and the distribution box contains main switches and fuses for each circuit.

24. Short-circuiting takes place in domestic power supply if the live wire and the neutral wire come into direct contact, without any load in between, either due to some fault in an electric appliance or due to damage to insulation of line wire.

25. Overloading of an electric circuit is caused by connecting too many appliances to a single socket.

26. Fuse is the most important safety device used in domestic power supply circuits. It is used to protect the circuits in case of either short-circuiting or overloading of the circuits. Fuse wire is prepared from a metal whose resistivity is high but whose melting point is low. The fuse wire melts due to overheating when current flowing through a circuit rises beyond a safe limit. As a result the current flow in the circuit stops and no damage is caused to the circuit.