- You will get an understanding of what are Pie Charts and a first-hand view of how data is presented through its organisation in the form of Pie charts.

- You will get an understanding of typical data which can be represented through Pie charts. Also, understand the concept of how the distribution of a whole is done in the form of Pie Charts.

- You will get a first hand feel of the typical question types that are asked on the basis of Pie charts.

Pie charts are specific types of data presentation where the data is represented in the form of a circle. In a pie chart, a circle is divided into various sections or segments such that each sector or segment represents a certain proportion or percentage of the total. In such a diagram, the total of all the given items is equated to 360 degrees and the degrees of angles, representing different items, are calculated proportionately. The entire diagram looks like a pie and its components resemble slices cut from a pie. The pie chart is used to show the break-up of one continuous variable into its component parts.

The types of pie charts:

There are two approaches to constructing a pie chart from any given data:

The central angle in a circle represents 360°, so any part or segment in a pie chart is calculated as a proportion of 360°. 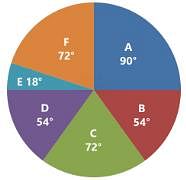 In this case, any part or segment in a pie chart is calculated as a part of 100%. 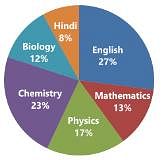 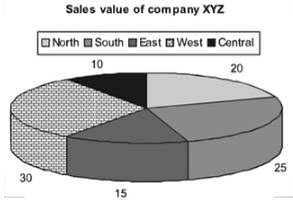 Practice Question:
Question for Pie Charts
Try yourself:The central angle of a sector is 72º. What percentage of the circle is comprised by the sector?
Explanation

The pie chart has gained prominence due to the following reasons:

- In a pie chart, we get a clear picture of the contribution of different sectors to the build up of the total. E.g., presentation of budgets.

- Comparing two pie charts is easier than comparing two bar charts or any other format of data representation.

Following is the cost analysis of a book “Guide to Digital Marketing”.

Question for Pie Charts
Try yourself:If 5500 copies of the book are published and the miscellaneous expenditure amounts to Rs.36,960 and the marked price is 40% above the cost price, then the marked price of each copy is
Explanation