A closed plane figure made up of several line segments that are joined together is called a polygon. The sidesdo not cross each other. Exactly two sides meet at every vertex. 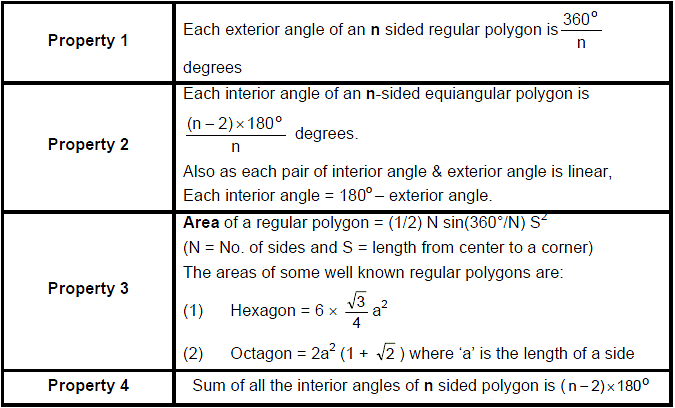 2. On the properties, quadrilaterals have been named differently, as given below.

(b) When the non – parallel sides are equal in length thenthe trapezium formed is “isosceles trapezium”.

(c) The diagonals of isosceles trapezium are equal inlength but do not bisect.

(a) Opposite sides are equals and parallel.

(b) Opposite angles are equal.

(c) Diagonals bisect each other

(d) Each diagonal divides the parallelogram into two triangles of equal area.

(a) All sides are equal, opposite sides are parallel.

(b) Opposite angles are equal.

(c) Diagonals bisect each other at right-angled. But they are not equal.

(d) Each diagonal divides the rhombus into two triangles of equal area.

Rectangle(a) Pair of opposite sides equal.

(c) Diagonals are equal and bisect each other (not at right angles).

(a) All sides are equal and angles equal.

(b) Diagonals equal and bisect at 90O. 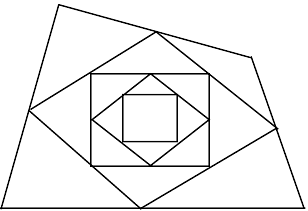 If O is a fixed point in a given plane, the set of points in the plane which are at equal distances from O willform a circle. 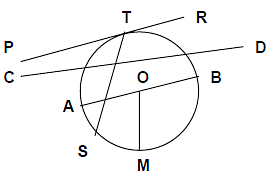 Properties of a Circle

1. If two chords of a circle are equal, their corresponding arcs have equal measure.

2. Measurement of an arc is the angle subtended at the centre. Equal arcs subtend equal angles at thecenter.

3. A line from centre and perpendicular to a chord bisects the chord.

4. Equal chords of a circle are equidistant from the centre.

5. When two circles touch, their centres and their point of contact are collinear.

6. If the two circles touch externally, the distance between their centres is equal to sum of their radii.

7. If the two circles touch internally, the distance between the centres is equal to difference of their radii.

8. Angle at the centre made by an arc is equal to twice the angle made by the arc at any point on theremaining part of the circumference.Let O be the centre of the circle.∠BOC = 2 ∠P, when ∠BAC = ∠P

9. If two chords are equal then the arc containing the chords will also be equal.

10. There can be one and only one circle that touches three non-collinear points.

11. The angle inscribed in a semicircle is 90o.

15. The length of the direct common tangent (PQ)

16. The length of the transverse common tangent (RS)

If a quadrilateral is inscribed in a circle i.e. all the vertex lies on the circumference of the circle, it is said to becyclic quadrilateral.

1. In a cyclic quadrilateral, opposite angles are supplementary.

2. In a cyclic quadrilateral, if any one side is extended, the exterior angle so formed is equal to the interioropposite angle.

Angles in the alternate segments are equal.

In the given figure, AC is a Chord touching the circle at points A and C. At point A we have a tangent PATmaking ∠CAT and ∠CAP with the chord AC. In the circle ∠ABC and ∠ADC are two angles in two differentsegments. 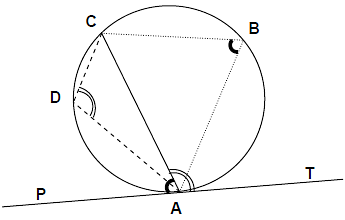