The document NEET Previous Year Questions (2016-21): Cell Cycle & Cell Division Notes | Study Biology Class 11 - NEET is a part of the NEET Course Biology Class 11.
All you need of NEET at this link: NEET

Q.1. Which of the following stages of meiosis involves division of centromere? (2021)(a) Anaphase II(b) Telophase II(c) Metaphase I(d) Metaphase IIAns. (a)Solution. Anaphase II: It begins with the simultaneous splitting of the centromere of each chromosome (which was holding the sister chromatids together), allowing them to move toward opposite poles of the cell by shortening of microtubules attached to kinetochores. 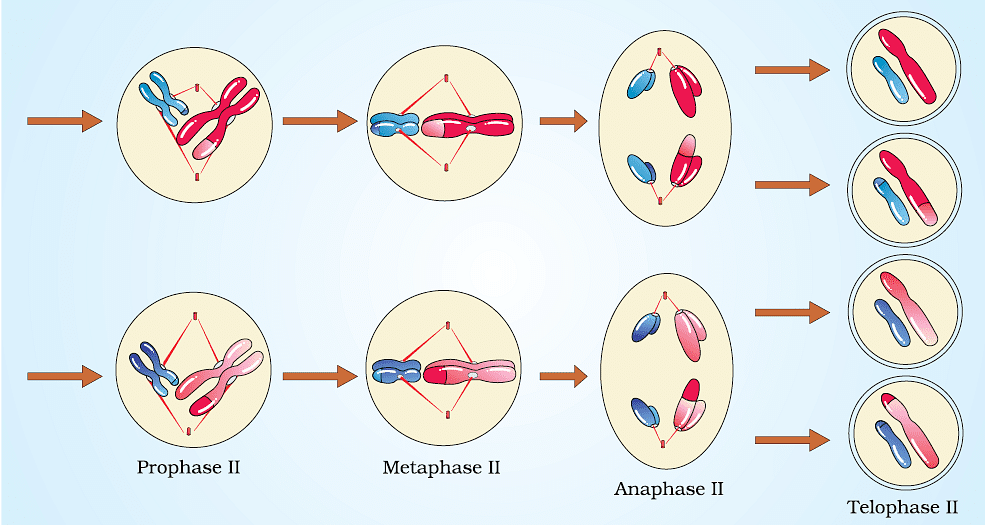 Q.6. Identify the correct statement with regard to G1 phase (Gap I) of interphase     (2020)(a) Cell is metabolically active, grows but does not replicate its DNA(b) Nuclear division takes place(c) DNA synthesis or replication takes place(d) Reorganisation of all cell components takes placeAns. (a)Solution.G1 Phase is metabolically active stage of cell cycle. Different type of amino acid RNA, Protein synthesis take place in G1 phase but DNA replication does not take place, (Note :- DNA replication occur in S-Phase)Q.7. Dissolution of the synaptonemal complex occurs during:     (2020)(a) Diplotene(b) Leptotene(c) Pachytene(d) ZygoteneAns. (a)Solution.Dissolution of the synaptonemal complex occurs at diplotene phase of prophase I in meiosis. 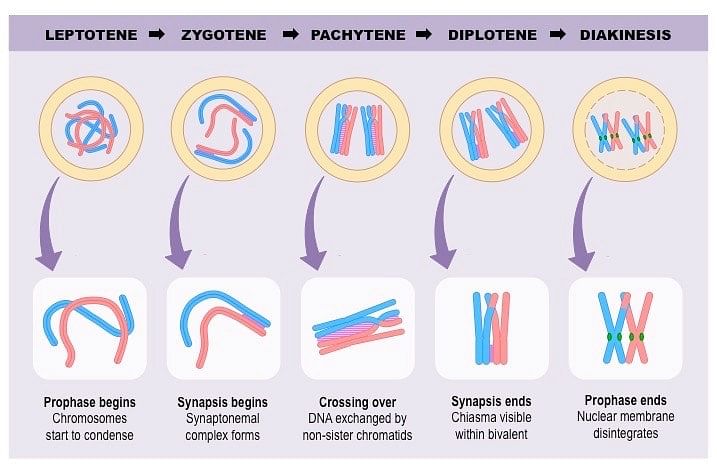 Select the correct option from the following:Code:

Ans. (d)Solution.Terminalization: It is the stage in which chromosomes condenses further. Sites of crossing over entangle together with effective overlapping which makes chiasmata clearly visible.Chiasmata: It is the region where crossing over occurs.Crossing over: Crossing over or chromosomal crossover occurs in the pachytene stage in which non sister chromatids of homologous chromosomes may exchange segments over regions of homology.Synapsis: Synapsis of homologous chromosomes takes place in the zygotene stage.Q.9. Some dividing cells exit the cell cycle and enter vegetative inactive stage. This is called quiescent stage (G0). This process occurs at the end of :     (2020)(a) S phase(b) G2 Phase(c) M phase(d) G1 phaseAns. (c)Solution.In M-Phase, some cells do not divide further exist G1 phase to enter an inactive stage called quiescent stages (G0) of the cell cycle.Q.10. Cells in G0 phase    (2019)(a) Terminate the cell cycle(b) Exit the cell cycle(c) Enter the cell cycle(d) Suspend the cell cycle.Ans. (b)Solution.Some cells in the adult animals do not appear to exhibit division (e.g., heart cells) and many other cells divide only occasionally, as needed to replace cells that have been lost because of injury or cell death. These cells that do not divide further exit G1 phase to enter an inactive stage called quiescent stage (G0) of the cell cycle. Cells in this stage remain metabolically active but no longer proliferate unless called on to do so depending on the requirement of the organism.Q.11. The correct sequence of phases of cell cycle is    (2019)(a) G1 → S → G2 → M(b) M → G1 → G2 → S(c) G1 → G2 → S → M(d) S → G1 → G2 → MAns. (a)Q.12. Crossing over takes place between which chromatids and in which stage of the cell cycle?    (2019)(a) Non-sister chromatids of non-homologous chromosomes at Zygotene stage of prophase I.(b) Non-sister chromatids of homologous chromosomes at Pachytene stage of prophase I. (c) Non-sister chromatids of homologous chromosomes at Zygotene stage of prophase I.(d) Non-sister chromatids of non-homologous chromosomes at Pachytene stage of prophase I.Ans. (b)Q.13. The stage during which separation of the paired homologous chromosomes begins is    (2018)(a) Pachytene(b) Diplotene(c) Diakinesis(d) ZygoteneAns. (b)Solution.During diplotene, the nucleoprotein fusion complex of synapsed chromosomes dissolves partially therefore homologous chromosomes separate except in the region of crossing over.Q.14. Which of the following options gives the correct sequence of events during mitosis?    (2017)(a) Condensation → Nuclear membrane disassembly → Arrangement at equator → Centromere division → Segregation → Telophase(b) Condensation → Crossing over → Nuclear membrane disassembly → Segregation → Telophase(c) Condensation → Arrangement at equator → Centromere division → Segregation → Telophase(d) Condensation → Nuclear membrane disassembly → Crossing over → Segregation → TelophaseAns. (a)Solution.Mitosis is divided into four phase prophase, metaphase, anaphase and telophase. During prophase, the indistinct and intertwined DNA molecule condenses to form elongated chromosomes. The nuclear membrane disintegrates during prometaphase During metaphase, the chromosomes align themselves at the equatorial plate. During anaphase, centromere of each chromosome divides into two so that each chromosome come to have its own centromere Chromatids move towards opposite poles along the path of their chromosome fibres. Finally, during telophase, two chromosome groups reorganise to form two nuclei. Nuclear envelope reappears, Golgi complex and endoplasmic reticulum are reformed Crossing over occurs during meiosis.Option (c) also gives the correct sequence of event but it misses step II (nuclear membrane disassembly). Hence, is ruled out as best appropriate answer is option (a).Q.15. Anaphase Promoting Complex (APC) is a protein degradaiton machinery necessary for proper mitosis of animal cell. If APC is defective in a human cell, which of the following is expected to occure?    (2017)(a) Chromosomes will be fragmented.(b) Chromosomes will not segregate.(c) Recombination of chromosome arms will occur.(d) Chromosomes will not condense.Ans. (b)Solution.During anaphase in mitosis, sister chromatids segregate at opposite poles. Therefore, a defective APC will affect chromosome segregation.Q.16. During cell growth, DNA synthesis takes place on    (2016)(a) S - phase(b) G1 - phase(c) G2 - phase(d) M - phaseAns. (a)Solution. In S-phase (synthetic phase) of cell cycle, the chromosomes replicate. For this their DNA molecules function as templates and form carbon copies. The DNA content doules i.e., 1C to 2C for haploid cells and 2C to 4C for diploid cells. As a result duplicate sets of genes are formed. Along with replication of DNA new chromatin fibres are formed which, however, remain attached in pairs and the number of chromosomes does not increase. As chromatin fibres are elongated chromosomes, each chromosome comes to have two chromatin threads or sister chromatids which remain attached at a common point called centromere.Q.17. When cell has stalled DNA replication fork, which checkpoint should be redominantly activated?    (2016)(a) G1/S(b) G2/M(c) M(d) Both G2/M and MAns. (b)Solution. If cell has stalled DNA replication fork, it implies that it has crossed CG1 or G1 cyclin cell cycle check point and has entered S-phase of cell cycle, where it is preparing for chromosome replication. Afterwards it will enter G2 phase and will soon approach second check point called mitotic cyclin (CM) which lies between G2 and M-phase).Q.18. Match the stages of meiosis in column I to their characteristic features in column II and select the correct option using the codes given below.    (2016)

The document NEET Previous Year Questions (2016-21): Cell Cycle & Cell Division Notes | Study Biology Class 11 - NEET is a part of the NEET Course Biology Class 11.
All you need of NEET at this link: NEET