Ans. cLactic acid fermentation is a type of anaerobic metabolic process. This usually takes place in some bacteria and even in muscle cells of animals and human beings. In lactic acid fermentation NADH.H+ transfers its electrons directly to pyruvate, generating lactate as a by-product. Less than seven percent of the energy in glucose is released in this process.

Ans. cGlycolysis is the step-wise breakdown of glucose into 3-carbon pyruvic acid. There are many enzymatically controlled steps. There are 2 ATP molecules which are consumed. The net gain of ATP in glycolysis is 8 ATP.

Ans. aAn electron transport chain (ETC) is a series of compounds that couples electron transfer with the transfer of protons across a membrane and transfer electrons from electron donors to electron acceptors with the help of redox reactions. This generates chemical energy in the form of adenosine triphosphate (ATP) by creating an electrochemical proton gradient, that drives ATP synthesis. The breakdown of proton gradient along the concentration gradient forms the ATP molecules. F0 protein complex of ATP synthase forms the channel through which protons cross the inner membrane during. For each ATP produced, 2H+ passes through F0 from the intermembrane space to the matrix down the electrochemical proton gradient.

Q.4. Which of the following statements is incorrect?       (NEET 2021)(a) ATP is synthesized through complex V.(b) Oxidation-reduction reactions produce proton gradient in respiration. (c) During aerobic respiration, the role of oxygen is limited to the terminal stage. (d) In ETC (Electron Transport Chain), one molecule of NADH+H+ gives rise to 2ATP molecules, and one FADH2 gives rise to 3 ATP molecules.

Ans. dDuring Krebs' or citric acid cycle, succinyl-CoA is acted upon by enzyme succinyl-CoA synthetase to form succinate (a 4C compound). The reaction releases sufficient energy to form ATP (in plants) or GTP (in animals) by substrate-level phosphorylation. GTP can then be used to form ATP.

Q.6. Conversion of glucose to glucose-6-phosphate, the first irreversible reaction of glycolysis, is catalysed by       (NEET 2019)(a) Phosphofructokinase(b) Aldolase(c) Hexokinase(d) Enolase

Ans. cGlucose is phosphorylated to glucose-6- phosphate by ATP in presence of enzyme hexokinase and Mg2+.

Ans. cRespiratory Quotient (RQ) is the ratio of the volume of carbon dioxide produced to the volume of oxygen consumed in respiration over a period of time.

Ans. bNAD is the electron carrier that picks the electron from other molecules and reduced to form NADH. It is the used as reducing agent to donate electrons.

Q.10. Which of these statements is incorrect?       (NEET 2018)(a) Enzymes of TCA cycle are present in mitochondrial matrix.(b) Glycolysis occurs in cytosol.(c) Glycolysis operates as long as it is supplied with NAD that can pick up hydrogen atoms.(d) Oxidative phosphorylation takes place in outer mitochondrial membrane.

Ans. dOxidative phosphorylation is the synthesis of energy rich ATP molecules with the help of energy liberated during oxidation of reduced coenzymes (NADH, FADH2) produced in respiration. The enzyme required for this synthesis is ATP synthase. It is located in F1 or head piece of F0-F1 or elementary particles present on the inner mitochondrial membrane.

Q.11. Which statement is wrong for Krebs’ cycle?       (NEET 2017)(a) There is one point in the cycle where FAD+ is reduced to FADH2.(b) During conversion of succinyl CoA to succinic acid, a molecule of GTP is synthesised.(c) The cycle starts with condensation of acetyl group (acetyl CoA) with pyruvic acid to yield citric acid.(d) There are three points in the cycle where NAD+ is reduced to NADH+ H+.

Q.12. Which of the following biomolecules is common to respiration-mediated breakdown of fats, carbohydrates and proteins?       (NEET 2016)(a) Glucose-6-phosphate(b) Fructose 1, 6-bisphosphate(c) Pyruvic acid(d) Acetyl CoA

Ans. dCarbohydrates are usually first converted into glucose before they are used for respiration. Fats are broken down into glycerol and fatty acids first. If fatty acids were to be respired they would first be degraded to acetyl CoA and enter the pathway. Glycerol would enter the pathway after being converted to 3-phosphoglyceraldehyde (PGAL). The proteins are degraded by proteases to individual amino acids (after deamination) and depending on their structure enter the pathway within the Krebs cycle or as pyruvate or acetyl CoA. Thus, acetyl CoA is the common metabolite of all the three (carbohydrates, proteins and fats).The given flowchart shows these interrelationships: 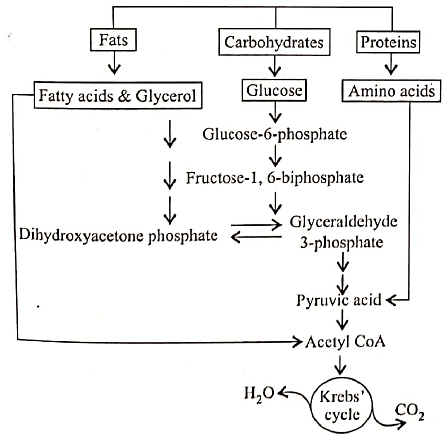 Ans. dOxidative phosphorylation is the synthesis of energy rich ATP molecules with the help of energy liberated during oxidation of reduced co-enzymes (NADU, FADH2) produced in respiration.The enzyme required for this synthesis is called ATP synthase. It is located in F1 or head piece of F0 - F1 or elementary particles present in the inner mitochondrial membrane. F1 particle is capable of ATP synthesis.ATP synthase becomes active in ATP formation only when there is a proton gradient having higher concentration of H+ or protons on the F0 side as compared to F1 side. This higher concentration creates an electric potential across the mitochondrial membrane. The proton gradient and membrane electric potential together form proton motive force (PMF). The flow of protons through the F0 channel which induces F1 particle to function as ATP synthase. The energy of the proton gradient is used in attaching a phosphate radicle to ADP by high - energy bond. This produces ATP.

The document NEET Previous Year Questions (2016-22): Respiration in Plants - Notes | Study Biology Class 11 - NEET is a part of the NEET Course Biology Class 11.
All you need of NEET at this link: NEET
Attempt Now
Join Course