Ecosystem(1) The word ecosystem was coined by A.G. Tansley in 1935.(2) Structure: The structure of any ecosystem is formed of two components, namely:(i) Abiotic factors(ii) Biotic factors(3) Abiotic factors: The abiotic factors of an ecosystem include the non–living substances of the environment. eg. water, soil, air, light, temperature, minerals, climate, pressure etc. The biotic factors of the ecosystem depend on the abiotic factors for their survival.(4) Biotic factors: The biotic factor includes the living organisms of the environment. e.g. Plants, animals, bacteria, viruses etc. The biotic factors of an ecosystem are classified into three main groups, namely:(i) Producers (ii) Consumers(iii) Reducers or Decomposers.(i) Producers:(a) The organisms which carry out photosynthesis constitute the producers of an ecosystem. eg. Plants algae and bacteria.(b) The producers depend on the abiotic factors of the ecosystem for producing energy. They are provided with chlorophyll.(c) Chloropyll is used in the synthesis of energy rich compounds with the utilization of abiotic factors like light, CO2, water and minerals.(d) A portion of the energy synthesized, is used by the producers for their growth and survival and the remaining energy is stored for future use.(ii) Consumers:(a) Consumers are organisms which eat or devour other organisms.(b) The consumers are further divided into three or more types.(c) They are primary consumers, secondary consumers and tertiary consumers.(iii) Reducers or Decomposers:(a) The decomposers are heterotrophs organisms that break up the dead bodies of plants and their waste products.(b) They include fungi and certain bacteria. They secrete enzymes.(c) The enzymes digest the dead organisms and the debris into smaller bits or molecules. These molecules are absorbed by the reducers.(d) After taking energy, the reducers release molecules to the environment as chemical to be used again by the producers. 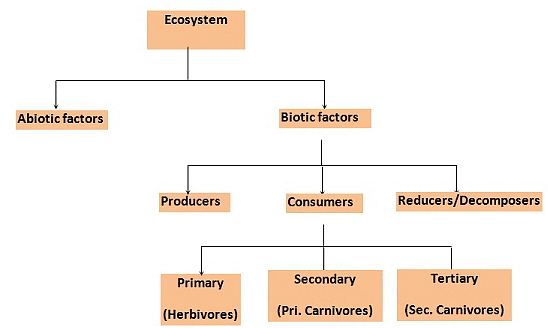 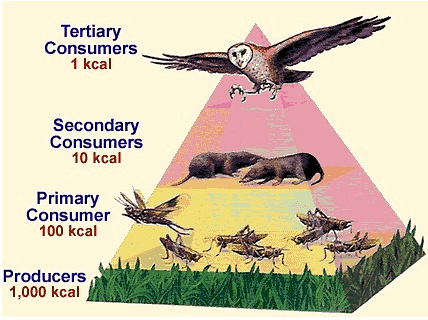 Ecological pyramids:(1) The number, biomass and energy of organisms gradually decrease from the producer level to the consumer level. This can be represented in the form of a pyramid called ecological pyramid.(2) Ecological pyramid is the graphic representation of the number, biomass, and energy of the successive trophic levels of an ecosystem.(3) The use of ecological pyramid was first described by Charles Elton in 1927.(4) In the ecological pyramid, the producer forms the base and the final consumer occupies the apex.(5) There are three types of ecological pyramids, namely:(i) The pyramid of number:The number of individuals at the trophic level decreases from the producer level to the consumer level. That is, in an ecosystem the number of producers is far high. The number of herbivores is lesser than the producers. Similarly, the number of carnivores is lesser than the herbivores.(i) In a cropland ecosystem: In croplands the crops are more in numbers. The grasshoppers feeding on crop plants are lesser in number. The frogs feeding on grasshopper are still lesser in number. The snakes feeding on frogs are fewer in number.Crop → Grasshopper → Frogs → Snakes → Hawks(ii) In a grassland ecosystem: In grassland the grasses are there in large numbers. The consumers decrease in the following order.Grass → Grasshopper → Lizard → HawkGrass → Rabbit → Fox → Lion(iii) In a pond ecosystem: The number in a pond ecosystem decreases in the following order.Phytoplankton → Zooplankton → Fishes → Snakes(b) The pyramid of biomass:Biomass refers to the total weight of living matter per unit area. In an ecosystem the biomass decreases from the producer level to the consumer level.(c) Pyramid of energy:The energy flows in an ecosystem from the producer level to the consumer level. At each trophic level 80 to 90% of energy is lost. Hence the amount of energy decreases from the producer level to the consumer level. This can be represented in a pyramid of energy level to the consumer level. This can be represented in a pyramid of energy.Succession(1) Every community undergoes a series of changes until a group of organisms is established which can live and reproduce most successfully in the area. This is called biotic succession.(2) The term succession was coined by Hult (1885).(3) A biotic community normally undergoes continuous changes. Generally, definite and orderly sequences of communities gradually appear in an area over a period of time.(4) A specific sequence of development of a community is related to particular set of physical and chemical conditions. This is known as sere.(5) The last succession in a sere is called climax or a climatic climax.(6) Types: Succession is of two types:(i) Primary succession: It includes changes which occur when living things become established on a previously uninhabited area such as a newly exposed sea floor, lake sediments or sand dunes.(ii) Secondary succession: It occurs where early communities have been damaged, leaving a few organisms and considerable organic matter. These remnant species, along with some new ones, regenerate a new community.(iii) Life forms: Raunkiaer (1934) has distinguished plants into five forms on the basis of size, shape, branching, crown, life span and perennation.(a) Therophytes: Annual plants which perennate in the form of seeds.(b) Cryptophytes: Buds are occurs very deep in the soil e.g. Bulbs, rhizomes, corm, tubers etc.(c) Hemicryptophytes: Perennating structures occur at ground level. Aerial shoots die in the onset of winter, e.g. rosette plants.(d) Chemaephytes: Small plants of cold areas where perennating buds or shoot apices lie at or above the ground level.(e) Phanerophytes: Perennial herbs, shrubs and trees, epiphytes, succulents, lianas, etc., where perennating buds occurs at 10 cm or more height above ground level.Nutrient CyclingCarbon Cycle(1) The cycling of carbon between biotic and abiotic systems is called carbon cycle. It is a gaseous cycle.(2) The main source of carbon is the carbon dioxide (CO2).(3) CO2 is present in the air and water. Air is the main reservoir. CO2 content of air is 0.03%. Its amount remains constant.(4) Flow of Carbon into the biotic system: Carbon flows into the biotic system in two ways:(i) Photosynthesis:Carbon enters the biotic system through photosynthesis. In photosynthesis green plants utilize CO2 and incorporate the carbon of CO2 in glucose. Glucose is used for the synthesis of other types of carbohydrates, proteins and lipids. These compounds, containing carbon, are stored up in the plant tissues. When plants are eaten up by herbivores, the carbon flows into the body of herbivorous animals through food chain. When herbivores are eaten by carnivores, the carbon enters the body of carnivorus animals.6CO2 + 6H2O → C6H12O6 + 6O2(ii) Formation of shell:The CO2 dissolved in sea water is utillized by the marine animals like protozoans, corals, molluscs, algae, etc., for the construction of shell. In these animals CO2 is converted into calcium carbonate (CaCO3) which is used for the construction of shells.CO2 + H2O → H2CO3 (Carbonic acid)H2CO3 → H+ + HCO3 (Bicarbonate)HCO3 + Ca+ → H+ + CaCO3 (Calcium carbonate)(5) Flow of Carbon into the abiotic system: The carbon of the biotic system flows into the abiotic system in five ways:(i) Respiration:Plants and animals release CO2 by respiration (biological oxidation).C6H12O6 → CO2 + H2O + Energy(ii) Decomposition:When plants and animals die, the dead bodies are decomposed into CO2 by decomposers like bacteria, algae, etc.(iii) Shells:After the death of marine animals, CaCO3 stored in the shells is either deposited as sedimentary rocks or dissolved in water to release CO2 by the reversion of the above said reactions.(iv) Coal:A certain proportion of carbon from plants is deposited as coal. Carbon from coal returns to air in the form of CO2 through combustion and weathering.(v) Forest fire:Combustion of wood in the forest releases carbon from plants in the form of CO2. 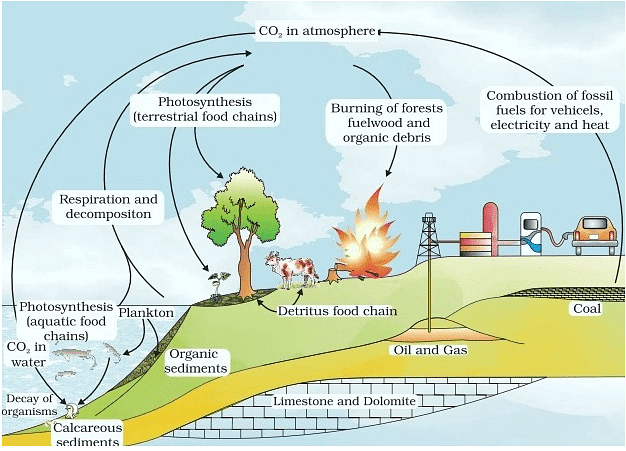 Phosphorus cycle:(i) The cycling of phosphorus between biotic and abiotic system is called phosphorus cycle. It is a sedimentary cycle.(ii) Phosphorus is an important mineral nutrient.(iii) The main source of phosphorus is rocks. Through erosion and weathering phosphorus is made available in the soil.(iv) Plants absorb ionic phosphate through roots. In plants it is incorporated into the protoplasmic components like DNA, RNA, AMP, ADP, ATP, GDP, GTP, NADP, phospholipids etc. from plants, it passes into herbivores and animals, the organic molecules containing phosphate are decomposed and phosphate is liberated as inorganic ion phosphate. It is again used by plants.(v) The excess of phosphate in the bodies of animals is excreted out through faces. The bird guano (excreta) contains a large amount of phosphate.(vi) Phosphate is also released to the soil through the combustion of forest trees and grasses.(vii) A large amount of phosphate is lost in the sea by sedimentation. A certain amount of phosphorus gets locked in bones and teeth. 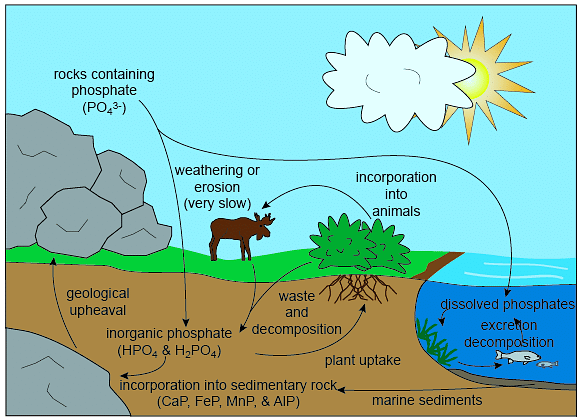