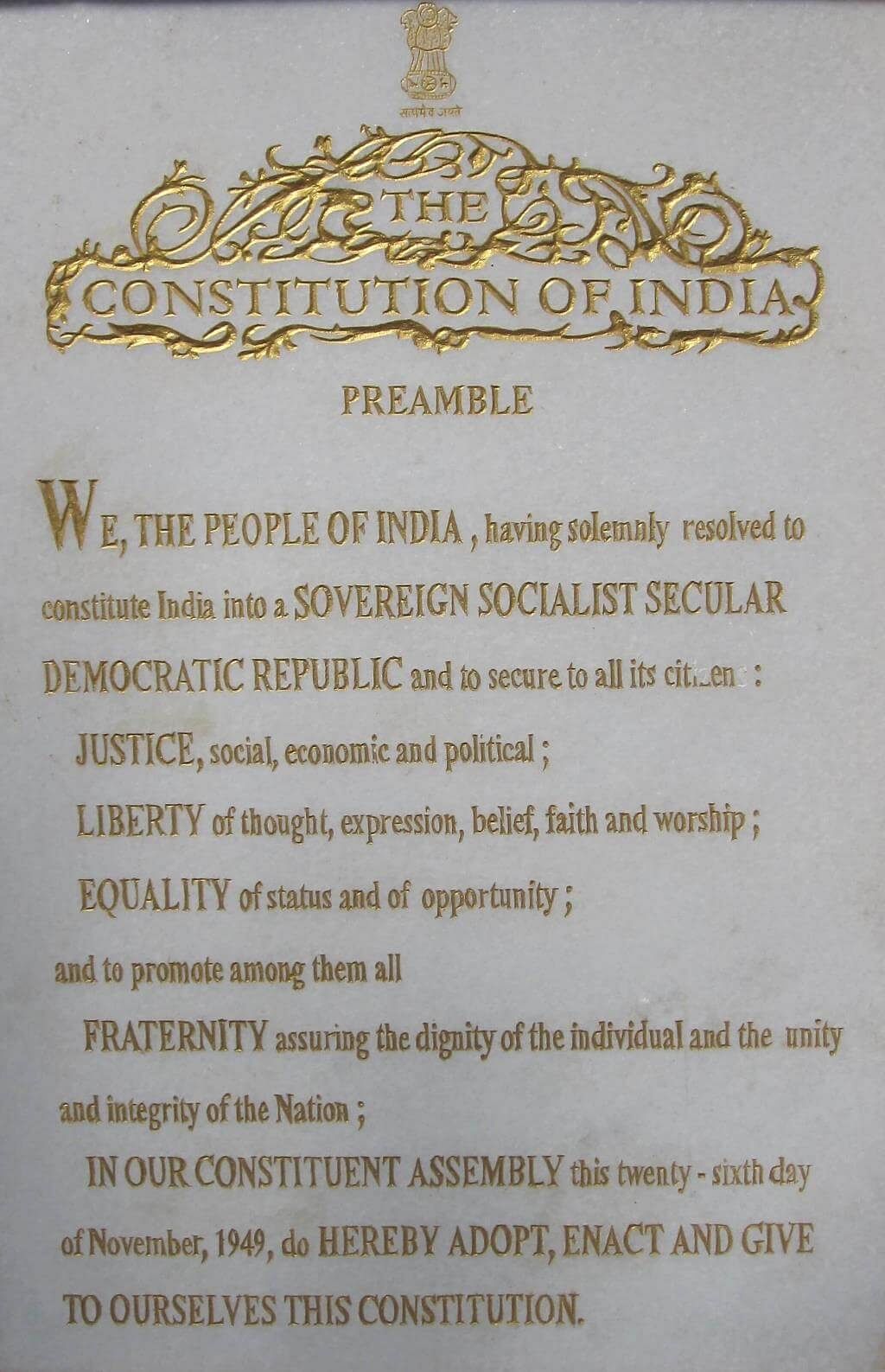 The parliamentary system of Government has been modelled on the British system.The Indian Constitution lays down the structure not only of the Central government but also of the States. In contrast, the US Constitution leaves the States to draw up their own Constitutions.The vastness of the country and peculiar problems relating to language have added to the bulk of the Constitution. It was felt that the smooth working of an infant democracy might be jeopardized unless the Constitution mentioned in detail things which were left to ordinary legislation in other Constitutions. That is why our Constitution contains detailed provisions about the organisation of judiciary, the services, elections, and the like.The Indian Constitution is the lengthiest and the most detailed of all the written constitutions of the world. It consists of 395 Articles divided into 22 parts and 12 Schedules. 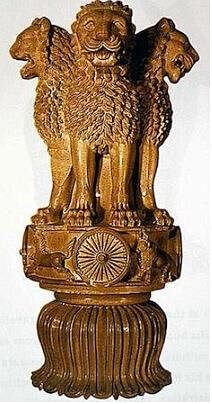 The Constitution of India establishes a parliamentary form of government both at the Centre and the States. In this respect, the Constitution-makers have followed the British model in toto.The essence of the Parliamentary form of Government is its responsibility to the legislature. The President is the Constitutional head of the State, while real executive power is vested in the Council of Ministers, headed by the Prime Minister.  The Council of  Ministers is collectively responsible to the Lok Sabha (lower house).

The members of the Lok Sabha are elected directly by the people. The position is same in the states.In contrast, the US Constitution establishes a Presidential type of Government based on the principle of separation of powers.

Unique Blend of Rigidity and Flexibility: A rigid Constitution is one which requires a special method of amendment of any of its provisions, while in a flexible Constitution, the provisions can be amended by ordinary legislative processes. A written Constitution is generally rigid.

The Indian Constitution, though written, is sufficiently flexible, however, a few provisions of the Constitution require the consent of half of the state legislatures. The rest of the provisions can be amended by a special majority of parliament as under Article 368.Fundamental Rights: Inspired by the principles of Natural Law and the need to enable the fullest development of the human personality, as well as to protect human dignity and worth, our Constitution makers were prompted to import a complete code of human rights in the Constitution, which have been elaborately detailed in Part III of the Constitution (Articles 12-32).

The State cannot make a law which takes away or abridges any of the rights of the citizens guaranteed in Part III of the Constitution. If it passes such a law, it may be declared unconstitutional by the courts. Moreover, the Supreme Court can issue writs in the nature of Habeas Corpus, Mandamus, Prohibition, Certiorari and Quo Warranto whenever these rights are violated.However, the Fundamental Rights are not absolute rights. They are subject to certain ‘reasonable restrictions’. Thus, the guarantee of individual rights in the Constitution has been very carefully balanced with the need for the protection of social and national interests.Directive Principles of State Policy: The Directive Principles of State Policy, contained  in Part IV (Articles 36-51), spell the aims and objectives to be taken up by the state in the governance of the country. Unlike the fundamental rights, the directive principles are not justifiable, that is, if the state fails to implement any provisions of Part IV no action can be brought against the state in a law court.

However, the idea of a Welfare State, as envisaged by Part IV of the Constitution, can be realised only if the state endeavours to implement them with a genuine sense of moral duty. 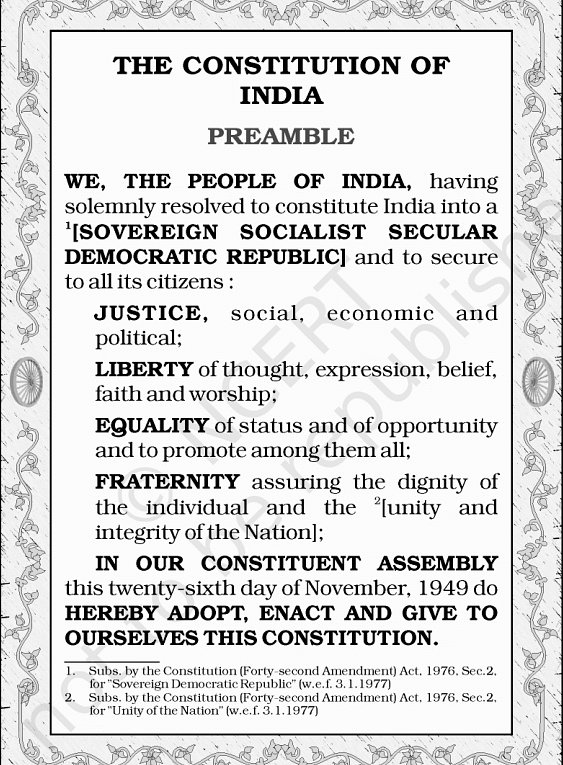 The Preamble of the Constitution of India – India declaring itself as a country.

A Federation with Unitary Features: The most remarkable feature of the Indian Constitution is that being a Federal Constitution it acquires a unitary character under certain conditions. During the proclamation of emergency the normal distribution of powers between the Centre and the States undergoes a vital change. The Union Parliament is empowered to legislate on any subjects mentioned in the State List.

The Central government is empowered to give directions as to the manner in which it should exercise its executive powers. The financial arrangements between the Centre and the States can also be altered by the Central government. Thus, during a proclamation of emergency, the Constitution acquires a unitary character.Universal Adult Suffrage: The old system of communal electorates has been abolished and the uniform adult suffrage system has been adopted. Under the Indian Constitution every man and woman above 18 years of age (the 61st Amendment Act, 1989 lowered the minimum voting age from 21 to 18 years) has been given the right to vote.

The adoption of universal adult suffrage (Article 326) without any qualification either of sex, property, taxation, or the like, is a bold experiment in India, having regard to the vast extent of the country and its population with an overwhelming illiteracy.Independent Judiciary. Mere enumeration of a number of fundamental rights in a Constitution without any provision for the proper safeguards cannot serve any useful purpose. The very existence of a right depends upon the remedy for its enforcement. It is said that unless there is remedy, there is no right.

Thus, an independent and impartial judiciary with a power of judicial review has been established under the Indian Constitution. It is the custodian of the right of citizens. It also plays a significant role in determining the limits of the power of the Centre and the States.Secular State: The Constitution established India into a secular state.

The state is to adopt an attitude of equality to all religious communities—the relationship between the state and the individual being that on the basis of citizenship and not on religious identities. Articles 25 to 28 of the Constitution give concrete shape to this concept of secularism. It guarantees to every person the freedom of conscience and the right to profess, practice and propagate religion.However, this freedom of religion is not an absolute freedom. Nothing can be done in the name of religion which is against ‘public order’, ‘morality and health’ of the public.Besides, religious freedom cannot be used to practice economic exploitation and the right to own, acquire and administer property is subject to the regulatory power of the state.Fundamental Duties: 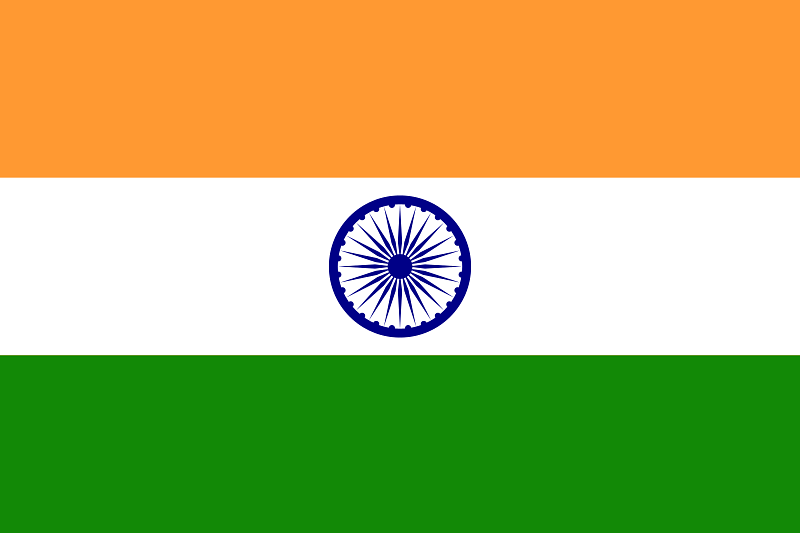 Any act of disrespect towards the Indian National Flag is illegal  In line with the recommendations of the Swarn Singh Committee, the Constitution 42nd Amendment Act, 1976, has introduced a Code of ten “Fundamental Duties” for citizens. Of course, there is no provision in the Constitution for direct enforcement of any of these Duties nor for any sanction to prevent their violation.

But, while determining the constitutionality of any law if a court finds that it seeks to give effect to any of these Duties, it may consider such a law to be `reasonable’ in relation to Articles 14 or 19, and thus save such a law from unconstitutionality. It would also serve as a warning to reckless citizens against antisocial activities such as burning of the Constitution, destroying public property, and the like.