The primary instruments for space applications are satellites but they must be placed in carefully determined orbits in order to be useful. A variety of rocket systems have been developed for this purpose. Launch vehicles that send satellites and other spacecraft into space must be far more powerful than other types of rockets because they carry more cargo farther and faster than other rockets.

A launch vehicle is a rocket-powered vehicle used to transport a spacecraft beyond Earth’s atmosphere, either into orbit around Earth or to some other destination in outer space. The launch vehicles have been used to send crewed spacecraft, uncrewed space probes, and satellites into space since the 1950s. 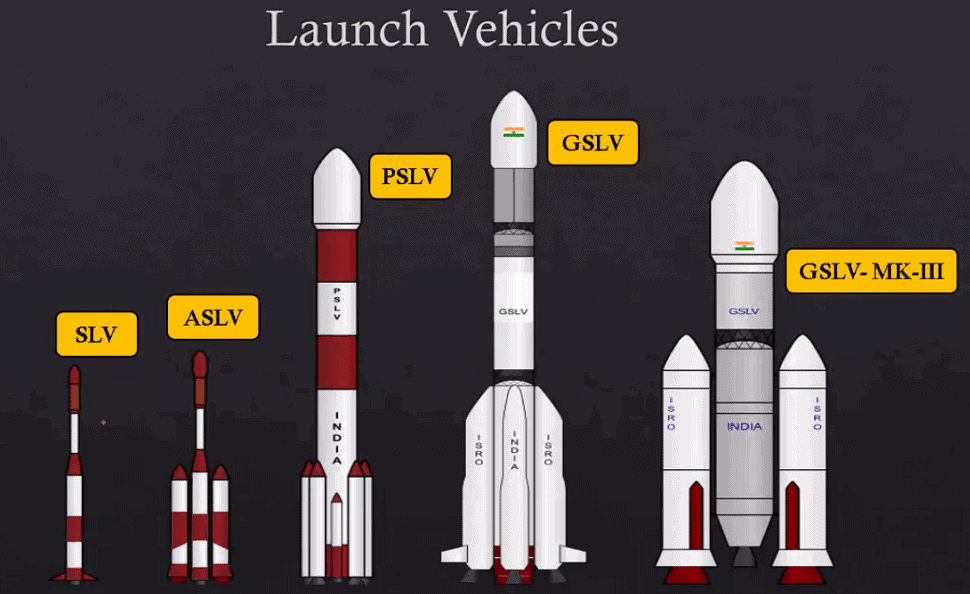 Rocket propellant is the reaction mass of a rocket.

A propellant is a chemical mixture burned to produce thrust in rockets and consists of a fuel and an oxidizer.Fuel is a substance that burns when combined with oxygen-producing gas for propulsion.An oxidizer is an agent that releases oxygen for combination with a fuel. The ratio of oxidizer to fuel is called the mixture ratio.

Propellants are classified according to their state – liquid, solid, or hybrid.

Liquid Propellants: In a liquid propellant rocket, the fuel and oxidizer are stored in separate tanks and are fed through a system of pipes, valves, and turbopumps to a combustion chamber where they are combined and burned to produce thrust.

Liquid propellants used in rocketry can be classified into three types: petroleum, cryogens, and hypergolic.

Solid propellant: These are the simplest of all rocket designs. They consist of a casing, usually steel, filled with a mixture of solid compounds (fuel and oxidizer) that burn at a rapid rate, expelling hot gases from a nozzle to produce thrust. When ignited, a solid propellant burns from the center out towards the sides of the casing.

Hybrid propellant: These engines represent an intermediate group between solid and liquid propellant engines. One of the substances is solid, usually the fuel, while the other, usually the oxidizer, is liquid. The liquid is injected into the solid, whose fuel reservoir also serves as the combustion chamber.

Sounding rockets are usually one or two-stage solid propellant rockets. They are primarily intended for probing the upper atmospheric regions using rocket-borne instrumentation. They also serve as platforms for testing prototypes of new components or subsystems intended for use in launch vehicles and satellites. The launch of the first sounding rocket US-made ‘Nike Apache’ from Thumba near Thiruvananthapuram, Kerala on November 21, 1963, marked the beginning of the Indian Space Programme.In 1965, ISRO started launching a series of our own sounding rockets named Rohini from TERLS. RH-75, with a diameter of 75mm was the first truly Indian sounding rocket, which was followed by RH-100 and RH-125 rockets.

The sounding rocket program was indeed the bedrock on which the edifice of launch vehicle technology was built. The experience gained was of immense value in the mastering of solid propellant technology and allied systems of the launch vehicles. Several scientific missions with national and international participation have been conducted using the Rohini sounding rockets.

The Satellite Launch Vehicle (SLV) project was born out of the need for achieving indigenous satellite launch capability for communications, remote sensing and meteorology.The Satellite Launch Vehicle-3 (SLV-3) was India’s first experimental satellite launch vehicle, which was an all solid, four-stage vehicle weighing 17 tonnes. It had a height of 22m and it was capable of placing 40 kg class payloads in Low Earth Orbit (LEO).

Augmented Satellite Launch Vehicle (ASLV) was developed to act as a low-cost intermediate vehicle to demonstrate and validate critical technologies. With a lift-off weight of 40 tonnes, the 23.8 m tall ASLV was configured as a five-stage, all-solid propellant vehicle, with a mission of orbiting 150 kg class satellites into 400 km circular orbits. The strap-on stage consisted of two identical 1m diameter solid propellant motors, Under the ASLV program, four developmental flights were conducted.

Polar Satellite Launch Vehicle (PSLV) is the third generation launch vehicle of India. It is the first Indian launch vehicle to be equipped with liquid stages. PSLV has four stages using solid and liquid propulsion systems alternately.After its first successful launch in October 1994, PSLV emerged as the reliable and versatile workhorse launch vehicle of India with 39 consecutively successful missions by June 2017.During the 1994-2017 period, the vehicle has launched 48 Indian satellites and 209 satellites for customers from abroad. Besides, the vehicle successfully launched two spacecraft –Chandrayaan-1 in 2008 and Mars Orbiter Spacecraft in 2013 – that later traveled to Moon and Mars respectively.PSLV earned its title “the workhorse of ISRO” through consistently delivering various satellites to Low Earth Orbits, particularly the IRS series of satellites.

It can take up to 1,750 kg of payload to sun-synchronous polar orbits of 600 km altitude. Due to its unmatched reliability, PSLV has also been used to launch various satellites into Geosynchronous and Geostationary orbits, like satellites from the IRNSS constellation. The PS4 is the uppermost stage of PSLV, comprising of two Earth storable liquid engines.Indian Regional Navigation Satellite System (IRNSS)Indian National Satellite System (INSAT)Geostationary Satellite (GSAT) 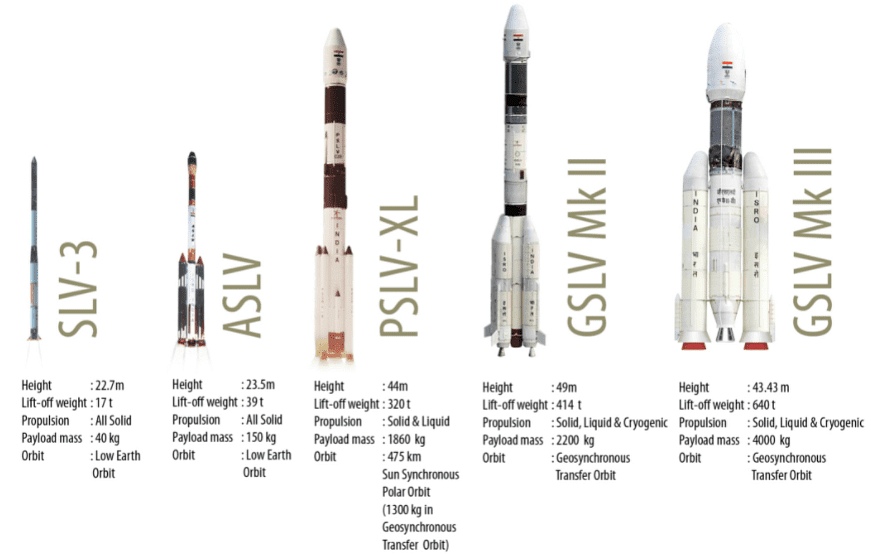 The third stage is the indigenously built Cryogenic Upper Stage (CUS) which uses typically 15 tons of cryogenic propellants (Liquid Hydrogen (LH2) as fuel and Liquid Oxygen (LOX) as Oxidiser).

Cryogenic rocket engine: Fuel or oxidizer (or both) is gases liquefied and stored at very low temperatures.

The Geosynchronous Satellite Launch Vehicle Mark III (GSLV MkIII) also known as LVM3, is the next generation launcher being developed by ISRO for achieving self-reliance in the launch of 4 ton class of communication satellites to Geosynchronous Transfer Orbits (GTO).

The launcher is designed to be a versatile launcher to launch payloads to other orbits as well and will have a payload capability in excess of 10 tons to Low Earth Orbits (LEO). Once GSLV-MkIII becomes operational, India would be able to dispense the procured launches for 4-ton class communication satellites.

Reusable Launch Vehicle – Technology Demonstrator (RLV-TD) is one of the most technologically challenging endeavours of ISRO towards developing essential technologies for a fully reusable launch vehicle to enable low-cost access to space. The configuration of RLV-TD is similar to that of an aircraft and combines the complexity of both launch vehicles and aircraft.

The winged RLV-TD has been configured to act as a flying testbed to evaluate various technologies, namely, hypersonic flight, autonomous landing, and powered cruise flight. In the future, this vehicle will be scaled up to become the first stage of India’s reusable two-stage orbital launch vehicle.

RLV-TD consists of a fuselage (body), a nose cap, double delta wings, and twin vertical tails. It also features symmetrically placed active control surfaces called Elevons and Rudder. This technology demonstrator was boosted to Mach no: 5 by a conventional solid booster (HS9) designed for low burn rate.  The selection of materials like special alloys, composites, and insulation materials for developing an RLV-TD and the crafting of its parts is very complex and demands highly skilled manpower. Much high technology machinery and test equipment were utilized for building this vehicle.

The satellites are launched into orbit by multi-staged satellite launch vehicles that can be used only once i.e. they are expendable. These launch vehicles carry oxidiser along with the fuel for combustion to produce thrust. Launch vehicles designed for one time use are expensive and their efficiency is low because they can carry only 2-4% of their lift-off mass to orbit. Thus, there is a worldwide effort to reduce the launch cost.

Nearly 70% of the propellant (fuel-oxidiser combination) carried by today’s launch vehicles consists of oxidiser. Therefore, the next generation launch vehicles must use a propulsion system which can utilise the atmospheric oxygen during their flight through the atmosphere which will considerably reduce the total propellant required to place a satellite in orbit.

Also, if those vehicles are made re-usable, the cost of launching satellites will further come down significantly. Thus, the future re-usable launch vehicle concept along with air-breathing propulsion is an exciting candidate offering routine access to space at far lower cost.

A ramjet is a form of air-breathing jet engine that uses the vehicle’s forward motion to compress incoming air for combustion without a rotating compressor. Fuel is injected in the combustion chamber where it mixes with the hot compressed air and ignites. A ramjet-powered vehicle requires an assisted take-off like a rocket assist to accelerate it to a speed where it begins to produce thrust.

Ramjets work most efficiently at supersonic speeds around Mach 3 (three times the speed of sound) and can operate up to speeds of Mach 6. However, the ramjet efficiency starts to drop when the vehicle reaches hypersonic speeds.

A scramjet engine is an improvement over the ramjet engine as it efficiently operates at hypersonic speeds and allows supersonic combustion. Thus it is known as Supersonic Combustion Ramjet or Scramjet.

A dual-mode ramjet (DMRJ) is a type of jet engine where a ramjet transforms into a scramjet over Mach 4-8 range, which means it can efficiently operate both in subsonic and supersonic combustor modes. An important development in ISRO’s Air Breathing Propulsion Project (ABPP) occurred on August 28, 2016, which was the successful flight testing of its Scramjet.

The first experimental mission of ISRO’s Scramjet Engine towards the realisation of an Air Breathing Propulsion System was successfully conducted from Satish Dhawan Space Centre SHAR, Sriharikota on August 28, 2016. With this flight, critical technologies such as ignition of air breathing engines at supersonic speed, holding the flame at supersonic speed, air intake mechanism and fuel injection systems have been successfully demonstrated. The Scramjet engine designed by ISRO uses Hydrogen as fuel and the Oxygen from the atmospheric air as the oxidiser. The August 28 test was the maiden short duration experimental test of ISRO’s Scramjet engine with a hypersonic flight at Mach 6.

ISRO’s Advanced Technology Vehicle (ATV), which is an advanced sounding rocket, was the solid rocket booster used for this test of Scramjet engines at supersonic conditions. Some of the technological challenges handled by ISRO during the development of Scramjet engine include the design and development of Hypersonic engine air intake, the supersonic combustor, development of materials withstanding very high temperatures, computational tools to simulate hypersonic flow, ensuring performance and operability of the engine across a wide range of flight speeds, proper thermal management and ground testing of the engines. India is the fourth country to demonstrate the flight testing of a Scramjet Engine.