Q.1. What is the role of acid in our stomach?    (1 Mark)Ans. HCl of gastric juice disinfects the food and acidifies it for the proper functioning of the proteolytic enzyme pepsin.

Q.3. State one reason for placing Mg and Ca in the same group of the periodic table?    (1 Mark)Ans. Due to the presence of 2 electrons in the valence shell and similar chemical properties.

Q.4. The human body is made up of five important components, of which water is the main component. Food as well as potable water are essential for every human being. The food is obtained from plants through agriculture, Pesticides are being used extensively for a high yield in the fields. These pesticides are absorbed by the plants from the soil along with water and minerals and from the water bodies, these pesticides are taken up by the aquatic animals and plants. As these chemicals are not biodegradable, they get accumulated progressively at each trophic level. The maximum concentration of these chemicals gets accumulated in our bodies and greatly affects the health of our mind and body.(i) Why is the maximum concentration of pesticides found in human beings?     (1 Mark)Ans. It is because humans are at the top of the food chain and due to biomagnification, the concentration of pesticides increases as one goes up the trophic levels.

(ii) Give one method which could be applied to reduce our intake of pesticides through food to some extent.      (1 Mark)Ans. Organic farming should be done or more biopesticides should be used.

Q.8. On which factor does the colour of the scattered white light depend?    (1 Mark)Ans. Size of the particles of the medium through which it is passing.

Q.9. A prism ABC (with BC as a base) is placed in different orientations. A narrow beam of white light is incident on the prism as shown in Figure. In which of the following cases, after dispersion, the third colour from the top corresponds to the colour of the sky ?    (1 Mark)(i) 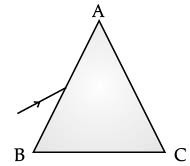 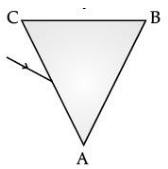 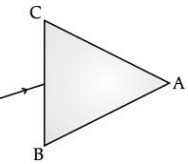 Q.10. What is the role of acid in our stomach?    (1 Mark)Ans. HCl of gastric juice disinfects the food and acidifies it for the proper functioning of the proteolytic enzyme pepsin.

Name the raw material required for photosynthesis.Ans. CO2 and water.Q.11. List two functions of the ovary of the human female reproductive system.    (1 Mark)Ans. Two functions of Ovary :(i) To produce female gamete/ovum.(ii) To secrete female hormones: estrogen and progesterone.

Q.13. A real image is formed by the light rays after reflection or refraction when they :(A) actually meet or intersect with each other.(B) actually, converge at a point.(C) appear to meet when they are produced in the backward direction.(D) appear to diverge from a point.Which of the above statements are correct?      (1 Mark)Options~(a) (A) and (D) (b) (B) and (D)(c) (A) and (B) (d) (B) and (C)Ans. c (iii) Which of the following has the highest electronegativity?(a) F(b) Cl(c) Br(d) IAns. (a) F

Q.18. Write the molecular formula of the 2nd and the 3rd member of the homologous series whose first member is methane.    (1 Mark)Ans. Ethane (C2H6)Propane (C3H8)

Q.19. Directions: Q. No 19 contain five sub-parts each. You are expected to answer any four subparts in this question.    (1 Mark)Study the given flow chart and answer any four questions. Q.20. Directions: Q. No 20 contain five sub-parts each. You are expected to answer any four subparts in this question.    (1 Mark)From the following part of the periodic table, answer any of the four questions :

(b) The family of fluorine Q, R, T is known as :(i) Halogens(ii) Alkali metal(iii) Transition metal(iv) Noble gasesAns. (i) Halogens.

Q.23. (a) Why did Mendel choose garden pea for his experiments? Write two reasons.    (2 Mark)(b) List two contrasting visible characters of garden pea Mendel used for his experiment.Ans. (a) Reasons :(i) Pea plant is small and easy to grow.(ii) A large number of true-breeding varieties of the pea plant are available.(iii) Short life cycle.(iv) Both self and cross-pollination can be made possible.(b) Contrasting characters :(i) Round / Wrinkled seeds(ii) Tall / Short plants(iii) White / Purple flowers(iv) Green / Yellow seeds

Q.25. A student observes the above phenomenon in the lab as white light passes through a prism. Among many other colours, he observed the position of the two colours Red and Violet.What is the phenomenon called? What is the reason for the violet light to bend more than the red light?    (2 Mark) 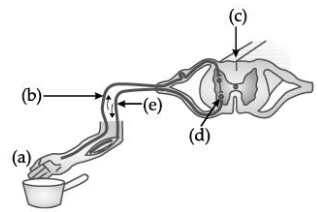 (a) What is tropism? How do auxins promote the growth of a tendril around a support?Ans. (a) Tropism: It is the directional growth movement of a plant organ in response to an external stimulus. Auxins produced in the shoot tip move downwards in the plant. These auxins cause cell elongation in the growing tissues. In the tendrils, auxins move away from the point of contact with the supporting object. More growth occurs on the side away from the support. As a result of unequal growth on the two sides, the tendril coils around the support.

Q.27. Name the plant Mendel used for his experiment? What type of progeny was obtained by Mendel in F1 and F2 generations when he crossed the tall and short plants? Write the ratio he obtained in F2 generation plants.    (3 Mark)Ans. Pea Plant / Garden pea / Pisum sativum F1 – All tall; F2- Tall and short Phenotypic Ratio – Tall:Short

Detailed Answer: Mendel used Pisum sativum (Pea plant) for his experiment. Mendel took a tall pea (TT) plant and a short pea (tt) plant. When he crossed both, the first filial generation (F1) obtained were tall. When F1 progeny was self-pollinated, all plants obtained in F2 generation were not tall. Instead, three tall peas (dominant) plants and one short pea (recessive) plant were obtained. Q.28. 1 g of copper powder was taken in a China dish and heated. What change takes place on heating? When hydrogen is passed over this heated substance, a visible change is seen in it. Give the chemical equations of reactions, the name and the colour of the products formed in each case.    (3 Mark) Ans. The black colour substance is formed by the reaction of copper with oxygen isCopper (II) oxide (CuO).Chemical Reaction: 2Cu + O2 → 2CuOHydrogen gas is passed over this heated material (CuO) the black coating on the surface turns brown as the reverse reaction takes place and copper is obtained.

Q.29. List the important products of the Chlor-alkali process. Write one important use of each.    (3 Mark) Ans. Products of the Chlor-alkali process are: Sodium hydroxide (NaOH), Chlorine gas (Cl2) and Hydrogen gas (H2).Uses of sodium hydroxide:(i) In the manufacture of paper.(ii) In making soaps and detergents.Uses of chlorine gas:(i) In the production of bleaching powder(ii) To make plastics (PVC), pesticides, chloroform, paints etc.Uses of hydrogen gas:(i) As fuel for rockets(ii) In the hydrogenation of oils to obtain vegetable ghee.

Q.30. 3 mL of ethanol is taken in a test tube and warmed gently in a water bath. A 5% solution of alkaline potassium permanganate is added the first drop by drop to this solution, then in excess.    (3 Mark)

(i) How is the 5% solution of KMnO4 prepared?Ans. Preparation of 5 g of KMnO4: By dissolving 5 g potassium permanganate in 100 mL of water.

(iii) Write the chemical equation of this reaction.Ans.

Q.33. What are homologous structures? Give an example. Is it necessary that homologous structures always have a common ancestor? Justify your answer.    (3 Mark)Ans. Homologous Structures: Structure that is similar in origin but performs different functions. For e.g. forelimbs of humans and the wings of birds perform different functions but their skeletal structures are similar.Yes, homology indicates common ancestry. Homologous organs follow the same basic plan of the organization during their development but in the adult condition, these organs are modified to perform different functions as an adaptation to different environments. Q.35. (A) A reaction between 'X' and 'Y' forms compound 'Z'. 'X' Loses an electron and 'Y' gains an electron. Show the formation of compound 'Z'. What type of compound is it?Write two properties shown by compound 'Z'.(B) Compare the properties of metals and non-metals on the basis of the following:(i) Malleability and ductility(ii) Conductivity(iii) Nature of the oxide formed by them.     (5 Mark)Ans.

The type of compound ‘Z‘ is ionic compound Properties of Ionic compound ‘Z‘.Ionic compounds are solids and hard because of a strong force of attraction between the positive and negative ions.They have high melting and boiling points as a considerable amount of energy is required to break the strong inter-ionic attraction.They are generally soluble in water and insoluble in organic solvents like kerosene, petrol etc.They conduct electricity in the molten state as the ions can move freely and conduct electricity. (Any two)(B) (iii) Nature of the oxide formed by them. 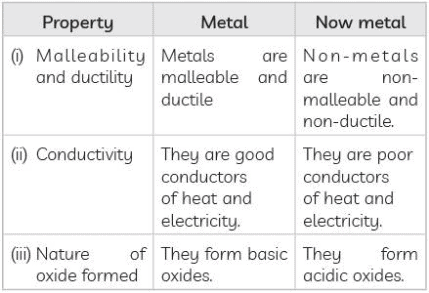 You are given a hammer, a battery, a bulb, wires and a switch.(A) How would you use them to distinguish between samples of metals and non-metals?(B) Assess the usefulness of these tests in distinguishing between metals and non-metals.Ans. (A) Given: a hammer, a battery, a bulb, wires and a switch.(1) Using a hammer: If the sample breaks, this means it is brittle and hence it is a non-metal. On the other hand, if the sample flattens to form a sheet, this means that the sample is malleable and hence is a metal.One can also use a battery, wires, bulb and switch to make a circuit and use the given material to complete the circuit one by one, if the electric current flows and the bulb glow then it is metal and if not then it is non-metal.(2) Though these tests give us a rough idea in distinguishing between metals and non-metals they are not reliable because there are exceptions both in metals as well as non-metals. For example Sodium (Na) metal is brittle and graphite can show conductivity.(B) (1) The most reactive element is Y as it displaces both X and Z from their compounds.(2) The least reactive element is Z as it is being replaced by both X and Y.

Q.36. (a) What is the thermit process? Where is this process used? Write the balanced chemical equation for the reaction involved.     (b) Where does the metal aluminium, used in the process, occurs in the reactivity series of metals?(c) Name the substances that are getting oxidised and reduced in the process.    (5 Mark)Ans. (a) Thermite reaction: Reaction in which iron oxide reacts with aluminium toproduce molten iron. It is an exothermic process.Fe2O3(s) + 2Al(s) → 2Fe(l) + Al2O3(s) + HeatThe thermite reaction is used to join railway tracks or cracked machine parts. This process is called thermite welding.(b) As aluminium is more reactive than iron, so it is placed above iron in the reactivity series.(c) Aluminium is getting oxidized to aluminium oxide and iron oxide is getting reduced to iron.

(a) What is genetics?(b) What are genes? Where are the genes located?(c) State and define three factors responsible for the rise of a new species.    (5 Mark) Ans. (a) Genetics: Branch of biology that deals with the study of genes and heredity in organisms.(b) Genes are the basic unit of heredity. They are linear segments of DNA that code for a gene product. Genes are located on chromosomes.(c) Factors responsible for the rise of a new species (speciation) are :(i) Geographic isolation: wherein geographic barrier prevents interaction between species. Over a period of time, the sub-populations become more and more diversified from one another and finally form two different species.(ii) Genetic drift: The accidental change in the frequency of genes in a small population is called genetic drift.(iii) Natural selection: It is the process that results in the increased survival and reproductive success of individuals that are well suited to their environment.