The document Secondary Batteries (Lead-Acid Battery) Class 12 Notes | EduRev is a part of the NEET Course Chemistry for JEE.
All you need of NEET at this link: NEET

Lead-Acid Battery Construction:The lead-acid battery is the most commonly used type of storage battery and is well-known for its application in automobiles. The battery is made up of several cells, each of which consists of lead plates immersed in an electrolyte of dilute sulfuric acid. The voltage per cell is typically 2 V to 2.2 V. For a 6 V battery, three cells are connected in series, and for a 12 V battery, six cells are series-connected.The construction of a lead-acid automobile type battery is illustrated in Figure 1. The electrodes are lead-antimony alloy plates with a pattern of recesses so that they are in the form of grids. 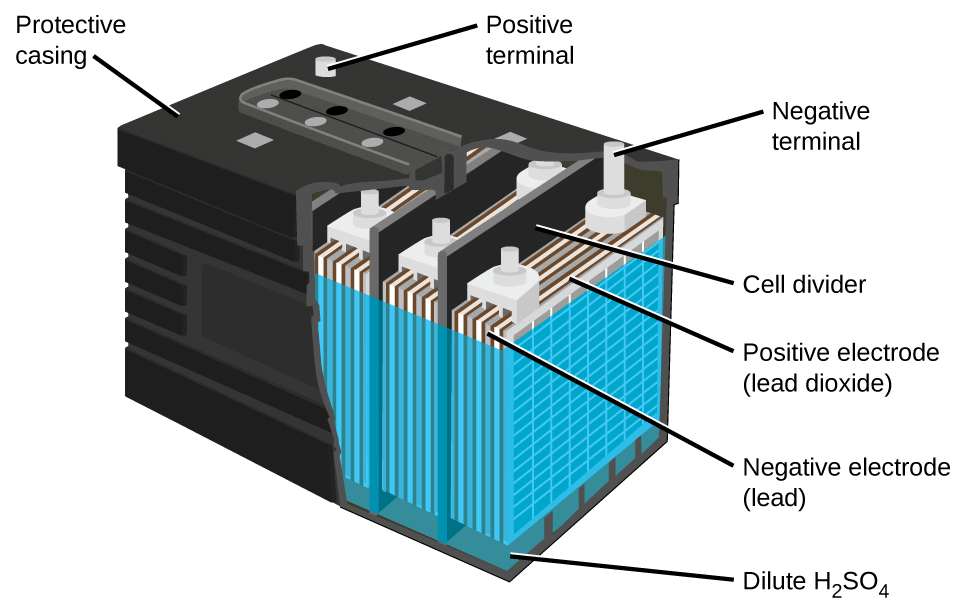 Plates:Lead oxide (termed active material) is pressed into the recesses of the plates. Each electrode consists of several plates connected in parallel with porous rubber separators in between, as illustrated in Figure 1 (b). This arrangement and the shape of the plates give the largest possible electrode surface area within the size limitations of the battery.

Fig 1: Lead-Acid Battery Plates ArrangementRubber Case:The complete 12 V battery, illustrated in Fig. 1, has an outer case of hard rubber. The case is divided into six sections for the six separate cells. Projections are provided on the inside at the bottom of the case to support the plates.These projections ensure that the lower edges of the plates are normally well above the level of an active material that falls to the bottom of a cell. Such material can short out the positive and negative plates and render a cell useless. 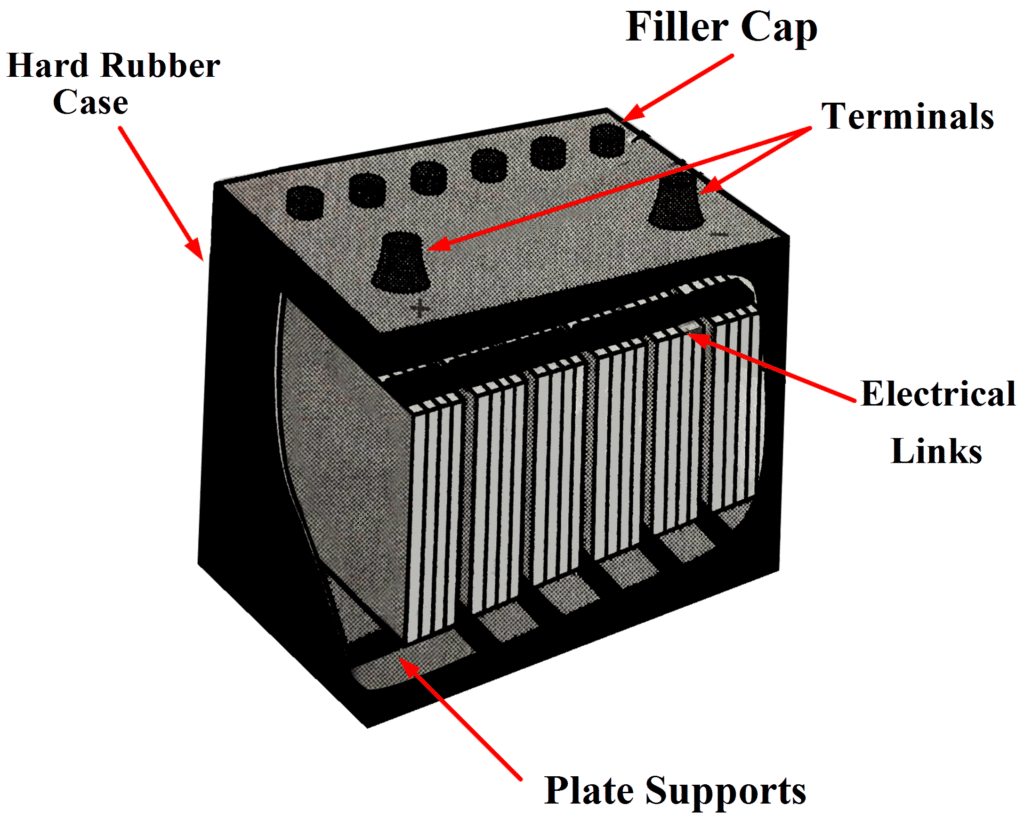 Fig 1 (c): Complete Lead Acid BatteryFiller Cap:Every cell has a threaded ﬁller cap with a small hole in its centre. The ﬁller caps provide access for adding electrolyte, and the holes allow gases to be vented to the atmosphere. Fig: Filler capElectrical Links:Thick electrical links connect the cells in series, and hefty battery terminals are provided. Because the battery may be required to supply a very heavy current, it is important that the resistance of all electrical connections be very low to minimize voltage drops. A current of 250 A is not unusual for a battery driving an automobile starter.Lead-Acid Battery Working:When the lead-acid cell is charged, the lead oxide on the positive plates changes to lead peroxide, and that on the negative plates becomes a spongy or porous lead. In this condition, the positive plates are brown in color, and the negative plates are gray.Lead-Acid Battery Discharging:When the battery is discharging (i.e., supplying a current), atoms from the spongy lead on the negative plates combine with sulfate molecules to form lead sulfate and hydrogen. As always, electrons are left behind on the negative plates so that they maintain a negative potential.The hydrogen released in the electrolyte combines with the lead peroxide on the positive plate, removing electrons from the plate to keep a positive potential. The combination of lead peroxide and hydrogen at the positive electrode produces water and lead sulfate.The water dilutes the electrolyte, making it a weaker solution, and the lead sulfate that is produced at both positive and negative plates tends to ﬁll the pores of the active material. Both these effects (dilution of the electrolyte and formation of lead sulfate) render each cell less efﬁcient and eventually cause the battery output voltage to fall.Lead-Acid Battery Recharging:When the battery is recharged, a current (conventional direction) is made to ﬂow into the positive electrode of each cell.This current causes the lead sulfate at the negative electrode to recombine with hydrogen ions, thus re-forming sulfuric acid in the electrolyte and Spongy lead on the negative plates.Also, the lead sulfate on the positive electrodes recombines with water to regenerate lead peroxide on the positive plates and sulfuric acid in the electrolyte. The final result of charging the cell is that the electrodes are re-formed and the electrolyte is returned to its original strength.With proper care a lead—acid battery is capable of sustaining a great many cycles of charge and discharge, giving satisfactory service for several years.Ampere-Hour Rating of Lead-Acid Battery:Typical ampere-hour ratings for 12 V lead-acid automobile batteries range from 100 Ah to 300 Ah. This is usually speciﬁed for an 8 h discharge time, and it deﬁnes the amount of energy that can be drawn from the battery until the voltage drops to about 1.7 V per cell.For a 240 Ah rating, the battery could be expected to supply 30 A for an 8h period (see Figure 2). With greater load currents, the discharge time is obviously shorter. However, the ampere-hour rating is also likely to be reduced for a shorter discharge time because the battery is less efﬁcient when supplying larger currents. Another method of rating a lead-acid battery is to deﬁne what its terminal voltage will be after about 5 s of supplying perhaps 250 A. This corresponds to the kind of load that a battery experiences in starting an automobile. It is important to avoid battery overloads that may demand excessive currents. Drawing a larger current than the battery is designed to supply may cause severe damage. Fig 2: Ampere Hour Rating for a Lead-Acid BatteryThe rating of a battery is typically stated for temperatures around 25°C, and this must be revised for operation at lower temperatures. Because the chemical reactions occur more slowly at reduced temperatures, the available output current and voltage are less than at 25°C. Around -18°C a fully charged battery may be capable of delivering only 60% of its normal ampere-hour rating.As the cell is discharged and the electrolyte becomes weaker, freezing of the electrolyte becomes more likely. A fully charged cell is less susceptible to freezing, but even a fully charged cell may fail when its temperature falls to about -21°C.Example 1: A lead-acid battery has a rating of 300 Ah.1. Determine how long the battery might be employed to supply 25 A.2. If the battery rating is reduced to 100 Ah when supplying large currents, calculate how long it could be expected to supply 250 A.3. Under very cold conditions the battery supplies only 60% of its normal rating. Find the length of time that it might continue to supply 250 A to the starter motor of an automobile.Ans:a. From the following equation,Ah Rating=I×tTherefore 2. If the internal resistance of the battery is 0.008 Ω and its (discharged) terminal voltage is 11.5 V, calculate the initial output voltage level for the battery charger.Ans:a. Safe rate of charge at the 8h discharge rate:

1. The level of the electrolyte in each cell should be checked regularly, and distilled water added as necessary to keep the top of the plates covered by about 1 cm of liquid.

2. Battery terminals should be kept clean and lightly coated with petroleum jelly to avoid corrosion.

3. In cold weather, batteries should always be maintained in a nearly fully charged condition to avoid freezing.

4. Lead-acid batteries should never be allowed to remain for a long period in a discharged state because lead sulfate could harden and permanently clog the pores of the electrodes.

5. Before storing it for a long time the battery should be completely charged, then the electrolyte should be drained so that the battery is stored dry.